R4.8m for nine pit toilets? Here’s what the company owner has to say 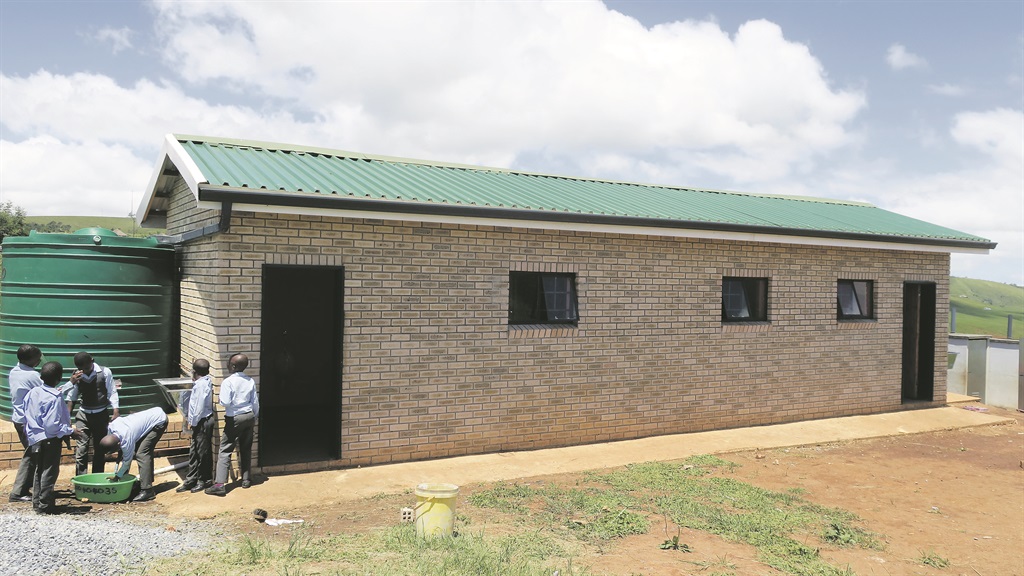 The toilets at Myolwa Senior Primary School which the contractor says he was paid R2.5million Picture: Lubabalo Ngcukana

The owner of the company responsible for building nine pit latrines at a school for R4.8 million has denied that this was what he was paid.

He also changed his mind when quoting what he was actually paid.

He said the money was used to build nine pit latrines and two urinals for the boys’ toilets, and to renovate four classrooms at the school.

On Saturday, Eastern Cape finance MEC Oscar Mabuyane announced an investigation following City Press’ report on the toilet scandal, to probe the cost of the contract, how the contract was awarded and why no classrooms were built with that money.

Last week, City Press reported that children at the school were crammed into leaky prefabs.

The school governing body said R4.8 million had been spent on the toilets alone while the school did not have a single proper classroom.

When City Press visited last week, staff said the prefabs were still leaking, and no renovations could be seen to have taken place.

Nxumalo said his company was contracted to build 12 pit latrines, but they built nine instead and decided to sacrifice two toilets for two urinals.

He told City Press by telephone that the project to build the toilets was for R4.2 million, but later changed his mind, saying that it was actually R3.3 million.

“Remember, they can say it’s R4.8 million. It’s not even R4.8 million. This thing was R4.2 million and there were contingencies on it. The contingencies were not paid for and the money also went into fixing the classrooms that were there. These mobile [prefab] units were leaking,” Nxumalo said.

Asked if he was sure the department paid R4.2 million, Nxumalo then changed his tune.

Nxumalo then said he was looking at a spreadsheet on his computer.

When asked to break down the figures and provide specifics for the work his company did and was paid for, Nxumalo said the building containing nine pit latrines and two urinals cost R2.34 million; plumbing and drainage, including a septic tank, cost R150 000; R500 000 was spent on “inspecting and fixing of prefab classrooms”; and there was a “contingency” of R400 000, “which we didn’t get”.

Nxumalo said this meant his company was paid R2.95 million, “but, when you include VAT on top of this, it was R3.3 million. That is the money that was paid to us in the end.”

Nxumalo said that, when they completed the project, the department called and said there had been an error, and that he needed to build 12 more pit latrines.

“We are doing the additional toilets from our side. The department is not going to pay us. It’s like a double job of some sort,” he said.

But the provincial education department’s figures did not match Nxumalo’s.

Spokesperson Loyiso Pulumani said: “All the toilets will cost R2.7 million. The R4 million includes repairs to existing buildings and other contingency allowances.”

Pulumani said 23 toilets were to be built and the first block of nine were completed.

“Nxumalo’s company has since been placed on terms to perform, or face termination,” he said.

An initial investigation into “underperformance and late completion of contracted work” had already resulted in the suspension of one official at the department.

Nxumalo admitted that building toilets was not his company’s speciality, saying: “Remember, this was an emergency. We just went to do that because it was an emergency thing. We are consultants.”

We live in a world where facts and fiction get blurred
In times of uncertainty you need journalism you can trust. For 14 free days, you can have access to a world of in-depth analyses, investigative journalism, top opinions and a range of features. Journalism strengthens democracy. Invest in the future today. Thereafter you will be billed R75 per month. You can cancel anytime and if you cancel within 14 days you won't be billed.
Subscribe to News24
Related Links
Education department provides toilets, but the wrong ones
Broken promises, broken dreams
Near death in a school pit toilet
Next on City Press
Court interdicts Al Jama-ah from ‘defaming’ Shadrack Sibiya