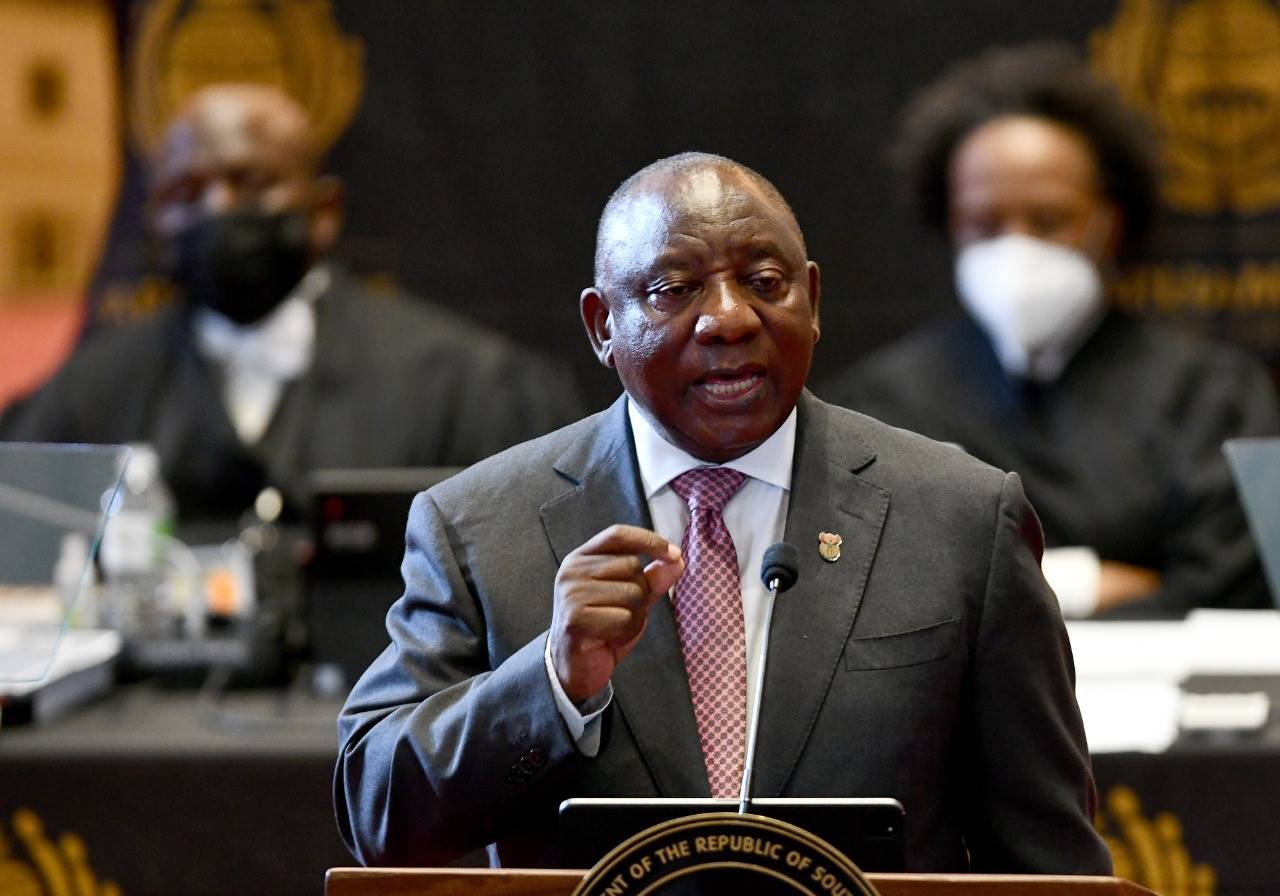 President Cyril Ramaphosa replying during the debate on the state of the nation address at the Cape Town City Hall. The president had delivered the address to a hybrid joint sitting of the National Assembly and the National Council of Provinces on February 10 2022. Photo: Kopano Tlale/GCIS

Responding to debate on his state of the nation address and criticism by opposition parties, President Cyril Ramaphosa has thrown his full weight behind his Cabinet and the law enforcement agencies.

He argued that he could not be expected, as president, to use his powers to prosecute his political opponents.

He said the National Prosecuting Authority was prosecuting people who were implicated in the state capture report.

That is the sole responsibility of the relevant director of public prosecutions. Our task as the executive is to capacitate the National Prosecuting Authority and make sure that it has all the resources it needs to prosecute wrongdoing as an independent authority.

On Thursday, the DA criticised Ramaphosa and his Cabinet for making promises with no delivery. DA leader John Steenhuisen also criticised the president for dragging his feet in prosecuting people who had been implicated in the state capture report.

We are going to make it easy for you. Today, I have tabled a vote of no confidence, not in you, but in your whole Cabinet, in terms of section 102(1) of the Constitution.

But Ramaphosa said they had supported the state capture commission to complete its work and enabled it to share the vast amounts of information with investigators and prosecutors.

We are taking disciplinary action against government officials implicated in procurement irregularities, and have started to recover billions in looted funds. Now, this hasn’t often been done in the past, but it is happening now. We have put in place capable leadership at previously captured state-owned entities and public institutions.

READ: Ramaphosa on rebuilding SA after years of state capture

He said he was motivated to reflect on the constructive criticisms and sincere suggestions that had been put forward with a view to improving the state of the nation, but would not respond to EFF leader Julius Malema’s insults, which had nothing to do with the debate.

“I refer here, for example, to the contribution on behalf of the honourable Mangosuthu Buthelezi on the characterisation of and appropriate response to state capture. I refer to the suggestions by the honourable Andrew Whitfield on moving the South African police service into the 21st century by introducing more than cutting edge training for police officers and a more effective use of technology.

I refer to the call by honourable Julius Malema on the industrialisation of cannabis in a manner that benefits local farmers in places such as the Eastern Cape, Limpopo and KwaZulu-Natal. I refer here also to the comments of Premier Sisi Ntombela on rural infrastructure development.”

On the question of economic recovery, Ramaphosa said fixing the economy was their most pressing challenge.

“Our focus on the economy does not, however, diminish the importance of many other areas of government’s work. It does not diminish the many other aspects of our people’s lives. Many of these issues have been raised in the debate and will be dealt with in greater detail in upcoming budget votes and public engagement by ministers as we reflect on the state of the nation.”

He said the economic recovery, expanding employment and increasing investment that had followed the advent of “our democracy” had been disrupted by the 2008 global financial crisis and also by falling commodity prices, severe energy constraints and inefficient network industries.

“As public spending rapidly increased, the benefits of increased spending declined to a point where the cost of servicing our debt has been crowding out our social spending. This was the situation when this administration was elected in 2019. To correct, we took several decisive measures to turn the economy and the country around,” Ramaphosa said.

This year we will ratify the AU protocol on the rights of persons with disabilities, which, among other things, includes the right to work. It places a responsibility on government to promote opportunities for people with disabilities to initiate self-employment and entrepreneurship and so that they are able to have access to financial services as well. The Employment Equity Amendment Bill has been tabled in Parliament to regulate the setting of sector-specific targets for representation of black people, women and persons with disabilities.

He said the presidential stimulus and other structural reform initiatives had provided work and livelihood opportunities for over 850 000 people in the 16 months since their establishment.