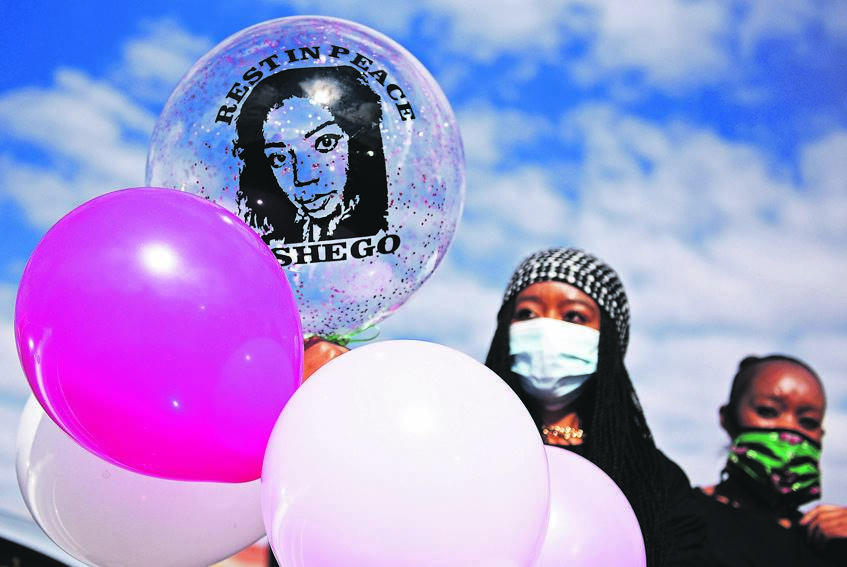 On April 10, Tshegofatso Pule would have turned 30 and her child would have just turned two. According to her family, she was very excited about becoming a mother and had already named her unborn baby Kamano (meaning “relationship” in Sesotho).

However, none of this materialised for the talented make-up artist who was murdered in June 2020.

In March, her boyfriend – Ntuthuko Shoba – was found guilty of masterminding her killing. Her body was found hanging from a tree with a bullet wound in her chest in Durban Deep, western Johannesburg, on June 5 2020. This week, Ntuthuko Shoba was sentenced to life in prison for orchestrating the murder of Tshegofatso Pule. Photo: Rosetta Msimango/City Press

She was eight months pregnant with Shoba’s child at the time.

Talking to City Press at Pule’s home in Meadowlands Zone 3 in Soweto, her aunt Nuku (60) recalled the last time she had spoken to her niece, on June 4, the day before her body was found. She was one of four family members who had interacted with Pule that day.

READ: Mduduzi Nonyane | The blood of women lies at the doorstep of policemen

Her niece, she recalled, had been wearing “relaxed attire, which encompassed blue leggings, white sneakers, a black cap and a grey T-shirt”.

“The day I last saw her was a happy one,” recalled Nuku.

“Her doctor had suggested that she eat more leafy green vegetables and so she had cooked spinach, pap and liver that day. I returned home from a tiring day at work to find that she’d made supper.

She then told me she’d be going out to see Shoba, as he’d wanted them to meet and draw up a list of necessities for the baby, which they could go and buy together. But she insisted on dishing up food for me first. She waited for me to finish and then washed all the dishes.

Nuku said that, a few minutes later, an Uber arrived to collect Pule and take her to Shoba’s home in Florida, 16km west of Johannesburg.

“She asked us not to lock the gate, because she’d be back later. Then she left,” said Nuku.

“After some time had passed and she still hadn’t returned, I simply thought they’d taken a long time to do their shopping, so I wasn’t too worried. In my heart, I was sure she was safe – she was with someone she loved, who loved her too. Or so I thought.”

However, two days later, when she had still not returned, the family were distraught.

“When we tried to call her, we couldn’t get through to her. Then, on the Sunday, we reported her missing. The police told us that a dead body had been found and asked us to look at it in case it was Tshegofatso.

“I refused to do that. I couldn’t bring myself to even imagine that it was my niece. But other family members did – and it was her,” said Nuku.

On Friday, Judge Stuart Wilson handed down a life sentence to Shoba for masterminding Pule’s murder. During the reading of his judgment, Wilson explained how the 33-year-old killer had taken advantage of Pule. Activists against gender-based violence gather outside the Johannesburg High Court during the sentencing of Ntuthuko Shoba this week. Photo: Rosetta Msimango/City Press

“She was a vulnerable woman looking for care and, as her pregnancy progressed, she relied more and more on Shoba, which led to him seeing both her and the unborn child as an inconvenience, because she needed money for baby clothes, as well as assistance with travel arrangements. That made it easy for him to arrange for her kidnapping.

“Shoba was the prime mover in bringing about Pule’s death, having planned and commissioned it, subsequently bringing into the picture Muzikayise Malephane, who was sentenced to 20 years for Pule’s murder after entering into a plea deal with the state in exchange for testifying against [Shoba].”

One of Pule’s cousins, Tshepang (28), told City Press that Pule had admitted to her that while she was looking forward to having her baby, she “wasn’t enjoying her pregnancy”, saying that she continuously received phone calls from a woman unknown to her who mockingly asked: “How’s the pregnancy going?” and then hung up before she could reply.

“She didn’t want to burden the family with this problem and said she’d try to deal with it herself. She said Shoba had told her about another woman [he used to see in the past] and Pule thought it was her making the calls. But they were taking their toll on her.

I wish I’d been there for her. When she told me that she wasn’t enjoying her pregnancy and asked when I could come to see her, I should have gone to her instantly, but I didn’t – and that will haunt me forever. At that stage, she was about six months pregnant.

Nuku recalls the day of Shoba’s sentencing: “I couldn’t be in court because we’d gone to bring her soul back from the graveyard. We’re a very spiritual family and it’s our belief that she needed to come back home.

“However, I wish I could have seen Shoba’s family, who – in more than two years – haven’t even attempted to apologise to us for what their son did,” she added angrily.

If they’d had any sort of remorse, they could have asked for a police escort and made an effort to see us. But it’s too late now. For them, at least their son’s still alive – but Tshegofatso’s gone. She’s no more.

She described her niece as bubbly and generous. She also laughingly described her as being indecisive, “but she was independent and liked to spend her own money”.

Tshepang told City Press that Shoba, whose nonchalant demeanour and smiles outraged many in the courtroom, seemed to “mock us as a family every time he appeared in the dock”.

“It angers me, but frightens me at the same time, because I don’t think that’s normal. He could have at least pretended to be remorseful in front of us, as Tshegofatso’s family. She was the mother of his unborn child.”

Speaking to journalists outside the court on Thursday, Pule’s uncle, Tumisang Katake, said the two years since the family’s devastating loss had been an emotional roller coaster, but he hoped that they could begin healing now that justice had finally been served.