Rosemary Ndlovu puts on a show in court Rosemary Ndlovu was the star of her own show – posing for pictures, then becoming a hostile witness – during her court appearance this week. Mduduzi Nonyane attended the proceedings.

Palm Ridge Magistrate’s Court was the place to be this week.

At first, multiple murder accused and former Tembisa South Police Station cop Rosemary Ndlovu (43) was not fazed by the camera lenses zooming in on her as she interacted with members of the media during her court appearance. However, as the week progressed, she became hostile and aggressive towards everyone.

Ndlovu is accused of masterminding the deaths of five family members for insurance payouts. She also faces a string of other charges, including fraud and defeating the ends of justice.

She was incarcerated after an alleged hitman, Njabulo Kunene, informed police that he had been recruited by her to kill her sister and children by setting fire to their house in Bushbuckridge, Mpumalanga.

The police set up a sting operation which ultimately led to the catching of Ndlovu on camera, detailing how she wanted the plot carried out.

More than 40 witnesses have testified against her in the Johannesburg High Court since her arrest in 2018.

On Tuesday, Ndlovu told the court that she had first met Kunene in 2017 when she was visiting his sister Cebisile, who was a close friend of hers.

“Cebisile and I hung around together and also spoke about how to raise money we wanted to spend at Emperors Palace,” she said. Kunene had then arrived.

“As Cebisile and I continued our discussion, this man stared at me. It seemed as if he was drunk. During that time, he said to me in isiZulu: ‘You look familiar.’ I told him I didn’t know him.

He said that a male officer and I had arrested him a while before. I told him I didn’t remember him. He said he had lived in a squatter camp in Vusimuzi [Tembisa] and that, during that police operation, firearms had been discovered,
Ndlovu told the court.

It was then that she had learnt that Kunene was Cebisile’s brother.

She said that the conversation with him had continued while Cebisile made calls to several people in attempts to get money for Emperors Palace.

“In that discussion, as we were trying to raise money, I told Cebisile about Nomasonto and the situation I had with her. I had in the past taken Nomasonto to Mr Madonsela, a loan shark, but she never paid back the money.”

“Nomasonto” was identified as Gladys Ndlovu and is related to the accused. The court refers to her as Ndlovu’s sister, but the latter maintains that she was her aunt. 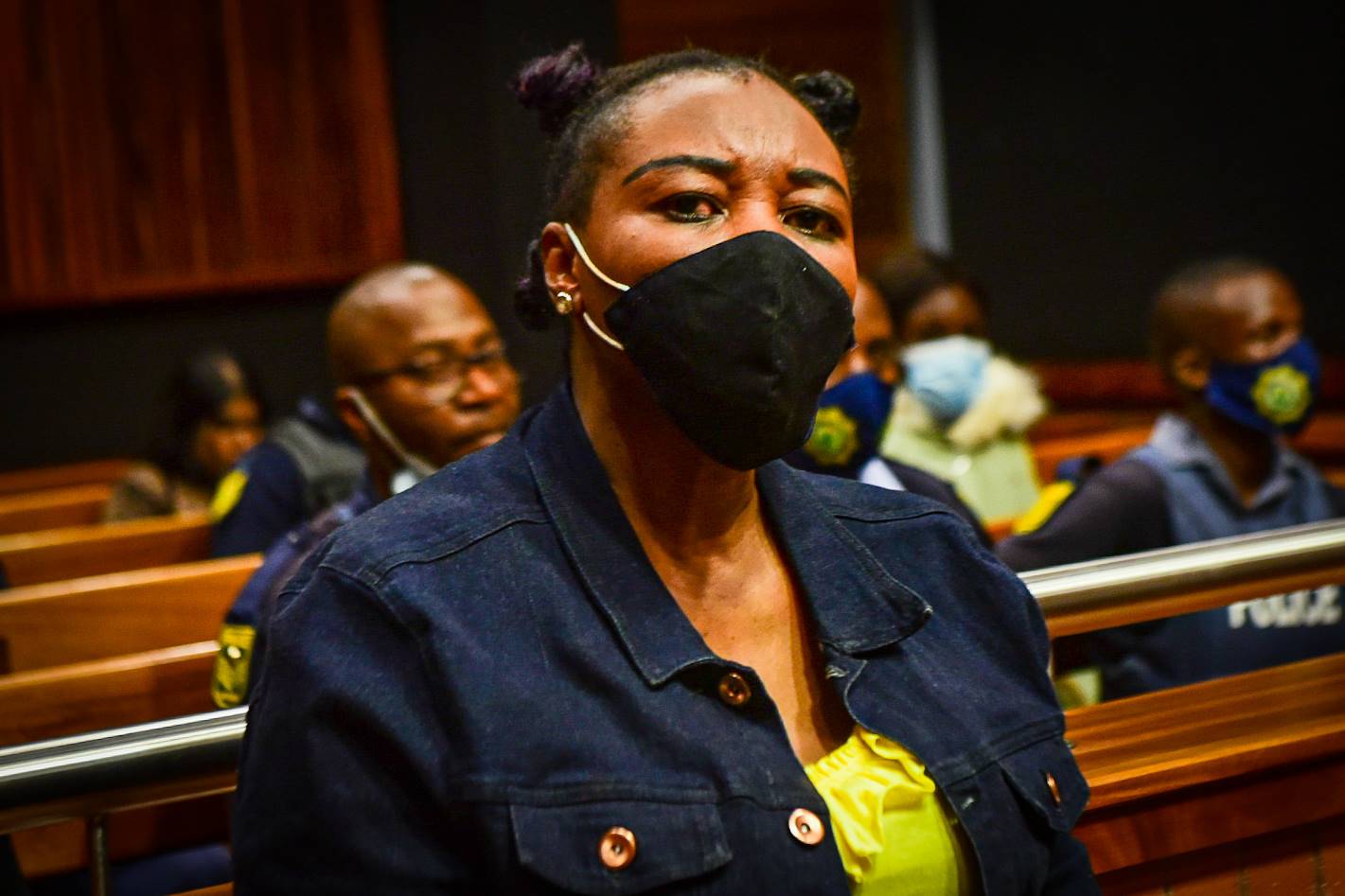 “I then told Cebisile that I needed to call Nomasonto to ask if she had the money she was meant to repay to Mr Madonsela. I called Nomasonto and asked her whether she was at home. She said she was.”

Ndlovu said Kunene had been listening to the conversation and had offered to get the two women transport to Nomasonto’s house, as it was too hot to take a taxi.

She said Kunene had left and returned after a short while in a car. In the vehicle with him were the driver and another man, Lakhiwe Mkhize.

The two women got into the vehicle and they all then headed towards Nomasonto’s home. Ndlovu said she had asked the driver to stop a short distance away from the dwelling and she and Cebisile had then walked there.

She said she had wanted the men to stay away, out of respect for Nomasonto’s husband, who could be infuriated by her bringing men to their home.

However, Kunene and Mkhize’s evidence revealed that the drive had been taken so that Ndlovu could point out Nomasonto’s house.

They claimed that Ndlovu had recruited them, saying she had a “job” for them, which was to kill Nomasonto.

On Tuesday, after the state closed its case, the proceedings were about Ndlovu’s testimony.

On Thursday, Ndlovu’s mother, Maria Mushwana, denied that her daughter had been in Bushbuckridge on the days leading up to Brilliant Mashego’s death, or on the day of the murder itself.

Mashego was Mushwana’s grandson and had been born to Audrey Ndlovu, who was found murdered in Tembisa in June 2013.

No, she wasn’t in Bushbuckridge – she was in Johannesburg.

This contradicted the evidence Ndlovu had given while she was on the stand – that she had seen Mashego in Bushbuckridge and the pair had met up at a shopping complex near a taxi rank.

She had added that the only reason she had agreed to meet up with Mashego was that she had an appointment with her boyfriend.

However, Mashego never made it home. His body was found dumped in a marketplace in Dwarsloop.

In addition, the state argued that Mashego had found out that Ndlovu had received over R717 000 in life cover for the death of his mother, Audrey, in June 2013.

Ndlovu admitted on the stand that she had taken out insurance for Brilliant as well, but said she had never claimed those policies.

During her cross-examination on Friday, Ndlovu blamed insurance agents for misrepresenting her relationship with her slain cousin, Witness Madala Homu. This seemed to contradict an affidavit she had signed under oath in a Hollard and Old Mutual insurance claim for Homu’s death in April 2012.

Prosecutor Riana Williams questioned Ndlovu about the insurance application, in which she had allegedly cited the deceased as a spouse in order to avoid paying higher premiums. She had subsequently received over R130 000 for that claim.

Williams also showed Ndlovu the claim application, which she said was in Ndlovu’s handwriting, asking her to confirm its contents, specifically regarding her relationship with the deceased.

I told the people for insurance that he wasn’t my spouse – that he was my brother – but they told me to put things as on the papers on the cover, and said they would let me know if there was a problem, which they didn’t.

She further denied that she had used the money for her personal benefit, as previously cited by Homu’s mother during her testimony.

Ndlovu insisted that she had given Homu’s mother R15 000 before the funeral, but this has been disputed by two other witnesses in previous testimonies.

The five people Ndlovu is accused of murdering in order to claim insurance payouts for their deaths are:

Listen to our latest podcasts.
Voting Booth
With less than two weeks to go to election day, political parties are ramping up their campaigning, bringing out influencers and celebs at their rallies. Do you think bringing out DJs, celebs and musicians will work to win votes?
Please select an option Oops! Something went wrong, please try again later.
I'm not influenced
90% - 120 votes
A gig is gig
6% - 8 votes
Need more of it
4% - 5 votes
Previous Results
The best of 2020
Can you guess who featured in our most popular articles from 2020?