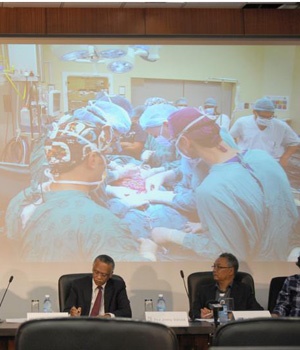 Nine men are already in line for a new penis, but they will have to wait a while.

The South African doctors who made medical history in December when they performed the world’s first penis transplant must do a proper cost analysis in the next few months before attempting another operation.

At this stage, a penis transplant has not been priced.

The head of the Tygerberg Academic Hospital will eventually have to decide who will pay for further research. But there is no doubt that their work will forge ahead.

“Whatever happens, our project will continue, thanks to the good support of provincial and national health management,” said Professor André van der Merwe.

Aside from the nine men on the waiting list, another 10 were eager to get on to the list, but they lived far from Cape Town, said Van der Merwe, the head of Stellenbosch University’s urology department.

He led the team that harvested a penis from a braindead patient in December in a two-hour operation and then transplanted it to its recipient in a nine-hour operation.

“It’s going very well with him. He has had minimal reactions to the medication that suppresses his immune system and his body has not yet rejected the penis,” he said.

“He and his girlfriend have accepted the penis and are regularly sexually active. He is also healthy and exercises regularly.”

He is back at work, according to the doctor, but the man’s colleagues don’t know he is the first recipient of a transplanted penis.

According to Professor Frank Graewe, a member of the medical team and head of Stellenbosch University’s department of plastic and reconstructive surgery, they are positive this procedure will be carried out successfully at all state hospitals.

“The most important elements of a successful operation are an experienced team and a well-chosen and motivated patient.”

Knowing more about the procedure and its importance, would you be willing to be a penis donor?

We live in a world where facts and fiction get blurred
In times of uncertainty you need journalism you can trust. For only R75 per month, you have access to a world of in-depth analyses, investigative journalism, top opinions and a range of features. Journalism strengthens democracy. Invest in the future today.
Subscribe to News24
Next on City Press
Online and banking fraud an issue as customers complain about unauthorised deductions

Listen to our latest podcasts.
Voting Booth
The CCMA has ruled that the dismissal of an employee for refusing to be vaccinated against Covid-19 was fair. What are your thoughts?
Please select an option Oops! Something went wrong, please try again later.
It is her right to refuse
21% - 8 votes
She is a risk to others
58% - 22 votes
Mandatory vaccination ?
11% - 4 votes
No to mandatory vaxxing
11% - 4 votes
Previous Results