Smaller parties band together, question the credibility of the elections 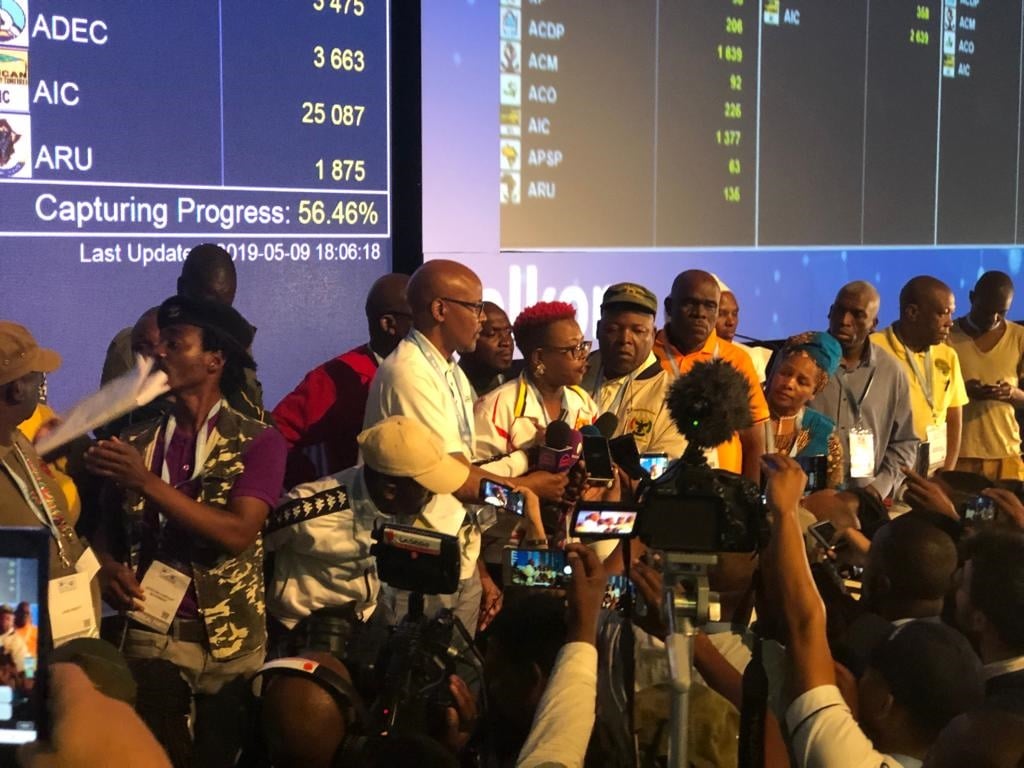 Mzwanele Manyi took to the stage and said the elections had not been free and fair. Picture: Palesa Dlamini/City Press

A group of smaller parties including Mzwanele Manyi’s African Transformation Movement , the Black First Land First party and the Socialist Revolutionary Worker’s Party marched into the Results Operation Centre in song and solidarity this evening to complain about the credibility of the elections.

Manyi took to the stage and said the elections had not been free and fair.

“I am a member of a political party and I voted but the ink is no longer visible on my thumb so had I wanted to vote again I could have done so easily,” he said.

“Because of some of these mishaps during the electoral processes we cannot trust the credibility of these elections.”

Various political parties including the African Transformation Movement are saying “these elections are not free and fair”. Mzwanele Manyi is currently addressing those at the IEC’s results operation center #SAElections2019 pic.twitter.com/SK7wTGrh0M

The Electoral Commission announced on Thursday that it would be probing allegations of double voting that took place during Wednesday’s national and provincial elections.

She said: “We are a bit uncomfortable because of all the issues that have been logged as being weaknesses in the system, especially the issue of possible double voting. That is a major issue for us as ATM and I think for a lot of the other political parties.

“We feel very strongly that we need to take this up because we cannot just keep quiet because, this is not just about ATM, it is about South Africans.”

Mashiya added: “If at any given moment there is a possibility that the results are not a true reflection of what the voters have done then we need to take that up as accountable leaders in South Africa, people that are representing the country.”

“A proper and intensive investigation needs to go into what really happened.”

Speaking about the parties chances in these elections, the spokesperson said that as a new political party, the ATM was confident.

“We are feeling confident because nationally we are sitting in the top 10 of all the political parties and in about three provinces we are within the top five,” she said. But activist Sizwe Mpofu-Walsh told City Press that the biggest issue plaguing Wednesday’s elections was one of communication from the Independent Electoral Commission, not the way the elections were executed.

Mpofu-Walsh, who is the son of EFF chairperson Dali Mpofu, told City Press that the issues that had arisen regarding alleged irregularities during the elections should be looked at from a broader perspective.

“There seem to be more problems in these elections than any other elections. But there are more than 22 000 voting stations and problems have been reported in less than a hundred of them, so that’s less than one percent of stations in the country that have experienced problems,” he said.

He, however, expressed that the elections were going incredibly well but he didn’t think there would be disputes over their credibility.

“My problem is in the way the IEC has communicated the isolated problems that have taken place.”

He added that: “The IEC needs to be more transparent in terms of what is happening. A lot of things happen in an election of more than 26 million people but when they do happen, they need to be communicated. The IEC has done a good job in how it has executed the elections but a bad job in communications where there have been problems.”

Mpofu-Walsh said that going forward the IEC needed to change a few things.

“The communications plan especially in the heat of the first day of results needs to be rethought. I ultimately think that although the IEC has resisted digitising this process, I really do think that we need to move this process into the 21st century,” he said.

Asked about the number of new parties taking part in the elections, Mpofu-Walsh said that the top three big parties would be disappointed.

“However I do think that the ANC will win.”

We live in a world where facts and fiction get blurred
In times of uncertainty you need journalism you can trust. For only R75 per month, you have access to a world of in-depth analyses, investigative journalism, top opinions and a range of features. Journalism strengthens democracy. Invest in the future today.
Subscribe to News24
Related Links
‘IEC: Investigation under way over allegations of double voting’
Voters have spoken. SA waits as election results trickle in
Next on City Press
26 025 police guns stolen or ‘missing’

Listen to our latest podcasts.
Voting Booth
Tourism Minister Lindiwe Sisulu’s comments on the Constitution and the judiciary has been termed an “extraordinary attack” that is “dangerous and regressive”. What are your thoughts?
Please select an option Oops! Something went wrong, please try again later.
She’s within her rights
11% - 48 votes
It’s all politics
24% - 106 votes
It was irresponsible
64% - 279 votes
Previous Results