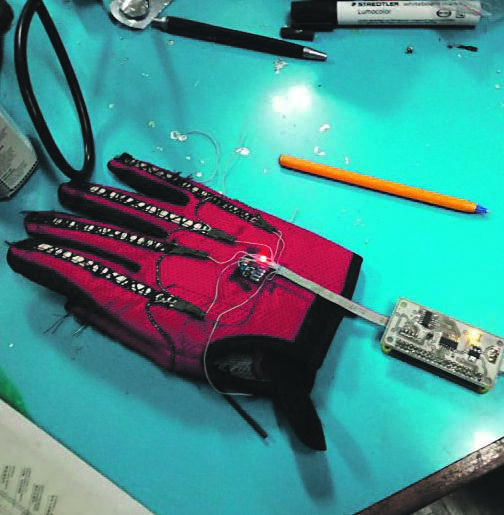 A Kenyan inventor, Roy Allela, was inspired by his deaf niece to create Sign-IO, a glove that interprets sign language into speech and that has been short-listed for this year’s Africa Prize for Engineering.

According to the World Health Organisation, about 400 million people worldwide suffer from a variety of hearing and speech impediments.

Many of these people use sign language to communicate with those around them. However, the difficulties lie in the fact that the greater public, with perfect hearing, are unable to understand sign language.

A Kenyan software engineer and Intel programme manager, Allela recognised this problem when trying to communicate with his deaf niece.

Sign-IO is a smart glove that reads the hand movements used in sign language and converts them into audio speech in real time. Allela says the aim of the glove is to assist those with a hearing and speech impediment communicate with people around them.

The glove is made up of sensors that are stitched into each finger.

The sensors pick up the finger movements of the signer, transmit the information via Bluetooth to a smartphone, and then vocalise the words being signed in real time with an accuracy of 93%.

One of the features integrated into the glove is that it allows people to speak as quickly or as slowly as they like, helping those who are either just learning to sign or those who have been doing it for years.

The application allows users to change the gender, language and pitch of the audio voice.

For his work, Allela won the Hardware Trailblazer award at the US Society of Mechanical Engineers Innovation Showcase competition.

Do you have a tech invention of your own that, like the one above, can ameliorate people’s lives?

SMS us on 35697 using the keyword GLOVE and tell us what you think. Please include your name and province. SMSes cost R1.50. By participating, you agree to receive occasional marketing material.

We live in a world where facts and fiction get blurred
In times of uncertainty you need journalism you can trust. For only R75 per month, you have access to a world of in-depth analyses, investigative journalism, top opinions and a range of features. Journalism strengthens democracy. Invest in the future today.
Subscribe to News24
Related Links
Young entrepreneur Nkululeko Tunzi creates innovative walking aid for blind people
Local entrepreneur Murendeni Mafumo creates water purification system to help needy
Young SA entrepreneur develops emergency app which may save your life
Next on City Press
Government is hauled to court for its position on the Miss Universe pageant in Israel