South Africans accuse foreign nationals working in Alex of stealing the jobs while those who are in the country legally question whether that’s really the issue at hand. Photo: Rosetta Msimango/City Press

The Operation Dudula Movement’s recent spate of activities against foreign nationals indicates a resurgence of mobilisation coupled with intensified social media tactics that exploit social divisions by fostering xenophobic sentiment under the banner of nationalism and patriotism.

In many cases, #OperationDudula activists are publicly taking the law into their own hands, raising questions about the capacity of law enforcement agencies to maintain order and protect all people in South Africa.

For the first six months after #OperationDudula appeared on social media in June, mentions of the hashtag occurred at low levels. Its volume was surpassed by the #PutSouthAfricaFirst conversation, which blamed foreign nationals for high levels of crime and unemployment in South Africa, and called for their deportation.

#OperationDudula continues to generate the most mentions in the recent online conversation about foreign nationals in South Africa.

Posters of #OperationDudula’s plan to remove foreign nationals from Soweto began circulating in June, with the first spike recorded around Youth Day.

READ: Close-Up | Why blame outsiders for our internal woes?

Posters of #OperationDudula’s plan to remove foreign nationals from Soweto began circulating in June, with the first spike recorded around Youth Day.

#OperationDudula appears to be an “events-led” movement – in addition to using social media to garner support, it draws heavily on physical mobilisation to amplify its message.

Between July and December, minor spurts in the conversation occurred over an organised march to the Union Buildings in August, the launch of #OperationDudula in Yeoville in November, and the circulation of a video of Dudula activists allegedly confiscating goods from a shop owner believed to be a foreign national.

Higher peaks were seen in January, when some supporters of #OperationDudula accused the EFF of hijacking their movement following the party’s announcement that it would check the employment ratios of foreign nationals to South Africans.

At the same time, posters announcing the movement’s launch in Pimville, Soweto, were circulating on social media.

The high number of mentions during the second week of last month – when #OperationDudula received its highest peaks – can be attributed to the group’s descent on Hillbrow and the alleged clash between Dudula members and law enforcement officers in Alexandra.

Earlier this week, supporters of #OperationDudula vowed to rid Alexandra of undocumented foreign nationals, leading to a clash with law enforcement.

The highly publicised activities on the ground feeding into a strong social media presence support the operation’s attempts to push away foreign nationals.

Both #PutSouthAfricaFirst and #OperationDudula take advantage of social media to amplify their messages.

Under the leadership of the now deactivated account of @uLerato_Pillay, the #PutSouthAfricaFirst conversation initially relied heavily on online misinformation and disinformation to blame foreign nationals for several social ills.

#OperationDudula appears to be an “events-led” movement – in addition to using social media to garner support, it draws heavily on physical mobilisation to amplify its message.

The peaks in the conversation’s trendline indicate that posts announcing a Dudula mobilisation receive little traction for several days and then a peak appears on the day of the operation, and conversation wanes after the operation comes to an end.

While some task themselves with closing foreign-owned shops, arguing that #Operation Dudula is beyond political or law enforcement interference, others continue to call on government to deport foreign nationals.

For example, the first few posts announcing plans to rid Soweto of foreign nationals on June 16 emerged as early as June 9, with little traction. On June 15, only 66 mentions contained #OperationDudula, with the highest peak recorded at 16 mentions at about 9pm that day.

On June 16, more than 900 mentions were recorded, with the highest peak occurring at 112 mentions at midday. Conversation once again dropped to 150 mentions by June 17.

#OperationDudula mentions in the hours between February 19 and 20

A similar trend to the one observed last year occurred when #OperationDudula planned its second mobilisation in Hillbrow on February 19 and 20, when the #OperationDudula conversation reached its highest peak.

Mentions of #OperationDudula increased from more than 2 000 on February 18 – a day before the weekend operation – to more than 14 000 and 15 000 on the two days of the operation. The highest peaks were observed between 5pm and 7pm on February 19, and at 4pm on February 20.

This suggests that, while online allegations and threats against foreign nationals play a hand in keeping #OperationDudula at the top of the list of trending hashtags on South African Twitter, the physical mobilisation of supporters has a bigger impact on the hashtag’s performance online.

The future of this movement and its impact on social cohesion in South Africa remain uncertain. 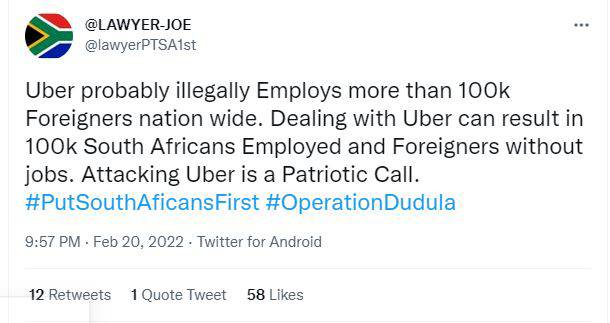 The highly publicised activities on the ground feeding into a strong social media presence support the operation’s attempts to push away foreign nationals.

#OperationDudula also leverages allegations of the low employment ratios of South Africans to foreign nationals in some businesses to garner support.

Supporters of the movement appear to have lost faith in government and the law, and believe that the removal of foreign nationals falls within their jurisdiction.

While some task themselves with closing foreign-owned shops, arguing that #Operation Dudula is beyond political or law enforcement interference, others continue to call on government to deport foreign nationals.

The militant activities of #OperationDudula supporters also raise questions around the danger of citizens taking the law into their own hands, as well as the status of the rule of law and the constitutional protection of all those who live in South Africa, regardless of whether they are citizens or not.

Among the calls for government to play an active role in addressing the issue of foreign nationals in the country are also pleas for the president and law enforcement to condemn the actions of movements such as #OperationDudula to avoid conflict between foreign nationals and South Africans.

While anti-foreigner activations and the coordinated use of #OperationDudula and similar-minded hashtags are on the rise, there appears to be little kickback from citizens and civic organisations opposed to all forms of xenophobia, either on the ground or on social media.

The future of this movement and its impact on social cohesion in South Africa remain uncertain. Will #OperationDudula continue to grow its support base by acting against foreign nationals and denigrating them on social media, or will Constitution-abiding South Africans and government authorities step in to restore the dignity and safety of our fellow Africans?

We live in a world where facts and fiction get blurred
In times of uncertainty you need journalism you can trust. For 14 free days, you can have access to a world of in-depth analyses, investigative journalism, top opinions and a range of features. Journalism strengthens democracy. Invest in the future today. Thereafter you will be billed R75 per month. You can cancel anytime and if you cancel within 14 days you won't be billed.
Subscribe to News24
Next on City Press
Transnet: Molefe and Singh also face arrest

Listen to our latest podcasts.
Voting Booth
A new report by the Electoral Integrity Project, which looks at the quality of electoral integrity worldwide, has identified South Africa as having the second-highest level of integrity in its elections in Africa. Do you agree with the report?
Please select an option Oops! Something went wrong, please try again later.
No
44% - 80 votes
Yes
31% - 55 votes
We should be first
25% - 45 votes
Previous Results