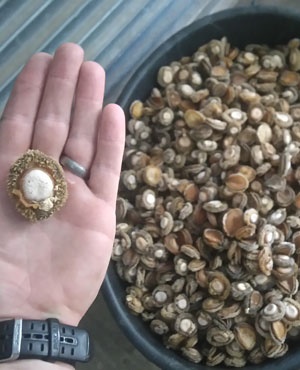 The agriculture, forestry and fisheries department has been rocked by allegations that senior officials devised an elaborate scheme to steal 3 tons of confiscated abalone.

An investigation by the department’s Fisheries Unit’s monitoring and surveillance director Nkosinathi Dana accuses the unit’s deputy director-general, Siphokazi Ndudane, acting chief director Thembalethu Vico and financial management acting chief director Nazima Parker of “illegally and unlawfully” authorising the use of the abalone in a staged sting operation in January that was aimed at defrauding the department.

In the report, submitted to the department’s acting director-general Mooketsa Ramasodi in February, Dana also accuses two Crime Intelligence Unit officers of being in on the plot.

Dana accuses Ndudane, Vico, Parker and the two undercover cops of swapping 3 tons of good-quality abalone with rotten stock when they discovered their plan had backfired.

“The initial objective of this was to defraud the department through misrepresentation that this abalone was going to be utilised to create a legend. Either way, once the abalone left our stores, there was no intention for it or its value to be returned,” Dana stated.

His report further states that, on December 18, Vico called Dana to a meeting with Parker, the two Crime Intelligence Unit operatives and Laeeq Aspelling, the custodian of the department’s confiscated abalone stores.

“The Crime Intelligence members were requesting the release of dried confiscated abalone that they were going to use for an undercover operation.

“The officers were in possession of a 252(A) authorisation signed by the deputy director of public prosecutions in the Western Cape.”

This section of the Criminal Procedure Act allows police to set up sting operations.

The authorisation was accompanied by an affidavit in which the two officers said they had a “source” who claimed he was approached by a Chinese national who wanted to use his permit to export a large quantity of illegally harvested abalone to the Far East, the report states.

At the meeting, Dana, who claims he alone may recommend the release of abalone for sting operations, asked the officers to go back to the National Prosecuting Authority (NPA) for another authorisation because theirs was based on a flawed affidavit.

Later, Dana said the two officers bypassed him and submitted the same application to Vico, who recommended the abalone be released.

On January 29, the NPA withdrew the authorisation after becoming aware of the irregularities, the report states. But Parker and Vico did not return the fresh stock.

The following week, Dana said, when he became aware that Vico and Parker were preparing to secretly return the abalone, he launched a surveillance operation.

“At about 10pm, a truck pulled up. At almost the same time, Vico and Parker arrived. As the offloading was taking place, it was observed that the returned abalone was of very poor quality ... smelling badly and most of it not fit for human consumption.”

Department spokesperson Steve Galane denied all the allegations, insisting Dana was not the only person who was allowed to recommend the issuance of abalone for sting operations.

“The objective of the operation was to infiltrate and deal with the abalone syndicates in China and South Africa. Not supporting it would cut against the mandate of the department,” he said.

Galane said Vico recommended the abalone be released because Dana hadn’t provided “proper” reasons the request should be declined.

He also denied any abalone was swapped, and said there had been “absolutely no theft” by Ndudane, Parker and Vico.

Related Links
North West DG hangs on despite tender scandal
Scandal-ridden public college being run like a ‘spaza shop’
How officials wasted more than R300m
Share
Next on City Press
What’s in City Press: Ace’s pals score big; How Mabuza fought back; Brand SA is rotten to the core