Government has emphasised that the increase in hospital admissions continues to place a strain on the health system in both the public and private sectors. Photo: Luba Lesolle/Gallo Images

Government was warned long before the third wave that a catastrophe loomed if restrictions were not tightened.

This severe third wave of Covid-19 infections could have been averted had government listened to warnings and suggestions from all health experts and practitioners who sit on the ministerial advisory committee on Covid-19 instead of prioritising the voices of some members over others.

This is according to vice-chairperson the SA Medical Association (Sama), Mvuyisi Mzukwa, who said that government seemed to be solely relying on advice from “certain” members within the committee, but muzzled others.

The committee was established last year as part of government’s response to the pandemic. It is made up of scientists and experts in various health disciplines.

President Cyril Ramaphosa is scheduled to address the nation tonight and it is expected that he will announce tighter Covid-19 restrictions following consultations with a range of societal stakeholders.

Mzukwa told City Press that Sama and other formations called for stricter regulations four weeks ago, “but we have been ignored”.

“To make it worse, even if something is done now, it will not change the peak. But if something had been done earlier, then that would have changed the trajectory of this pandemic, especially this wave,” he said.

We will take guidance from the ministerial advisory committee on which of these sectors to prioritise and move along until all work-based vaccinations are completed.
Acting Health Minister Mmamoloko Kubayi-Ngubane

He added that Sama chairperson Dr Angelique Coetzee, who also sits on the ministerial advisory committee, attempted to persuade government to move to a much stricter lockdown level prior to the country entering the current third wave, but her cautions fell on deaf ears.

“We [Sama] have been mentioning these things and making sure that people are aware that we could have taken action earlier,” said Mzukwa.

WHAT SHOULD HAVE BEEN DONE

“This has been the case since the appointment of the advisory committee; they would make recommendations to the national coronavirus command council on what steps to take and the subsequent response from government after consultations with the council would be at direct odds with the latter’s submission.”

Dasoo said health experts told government as early as March that a third wave was imminent. They urged government to make preparations accordingly, but this advice was not heeded.

Mzukwa said: “Now that we have these high numbers of admissions, where the healthcare system is overburdened, [the same people who disregarded calls] are now talking about moving to level 4.

“You don’t move from one level to a much stricter one when things are at such a critical stage and hospitals are overburdened.

“You move to avoid and prevent the overburdening of the healthcare system. But we were ignored as usual.”

Two other medical practitioners who sit on the ministerial advisory committee confirmed that “there is selective implementation of advice given to government”.

Mzukwa said Sama had resorted to forgoing the ministerial advisory committee route and “releasing statements” directly informing South Africans “of the gravity of this wave”, and the measures to take.

One of the suggestions that Sama raised at ministerial advisory committee meetings but that was not implemented was the call for “dashboards to monitor admissions, especially as they relate to Covid-19 across all provinces”.

He said there was no uniformity countrywide, as some of the provinces were implementing the suggestions, while others were not.

The Western Cape is among the provinces that have cooperated in this regard.

According to Mzukwa, lack of communication also leads to situations where ambulances continue to take people to hospitals that do not have beds or are experiencing severe pressure.

That is what is clogging the system in Gauteng at the moment, he said.

TO TIGHTEN OR NOT TO TIGHTEN?

On the possible move to a stricter level 4 or level 5 lockdown as is being suggested, Mzukwa said the consensus within the ministerial advisory committee was that these changes in alert levels were merely on paper.

“In actual fact, the move in alert levels does not happen on the ground. Look at the shebeens and taverns and everywhere else – people are drinking alcohol as free as they can be, even with the recently upwardly adjusted lockdown level. So it looks like it is just something on paper and it is not happening on the ground.”

Mzukwa lamented the fact that political parties were still congregating and running the risk of giving rise to superspreader events.

He was indirectly referring to supporters of suspended ANC secretary-general Ace Magashule, who breached level 3 restrictions when they turned out in their numbers to support him outside the Johannesburg High Court this week.

The supporters congregated for a mini-rally outside court even though the actual hearing was being held virtually.

Also breaching restrictions were members of the EFF, who held a mass protest in Pretoria, ironically, to demand the speedy roll-out of vaccines.

Revelations of divisions within the ministerial advisory committee have come to light at a time when the country is in the grips of a tsunami of infections, with Gauteng as the epicentre.

On Friday, the country recorded 18 762 infections, with Gauteng accounting for a staggering 11 777 cases.

The various sectors of the economy are recovering well, and slowing down the economy is not an option. We continue to perform a balancing act of saving lives and livelihoods.
Gauteng Premier David Makhura

Sources with intimate knowledge of the crisis engulfing the provincial health sector told City Press that “for the first time since the pandemic struck, Gauteng hospitals have had to relocate some patients to KwaZulu-Natal hospitals”.

Meanwhile, Minister in the Presidency Khumbudzo Ntshavheni believes that the tone of the weekly national command council meetings will be set by the provinces, as they will present their strategies on how to deal with the third wave.

The general picture is that some provinces will be looking to implement tighter localised restrictions to ensure that the districts that are most affected by the pandemic can curb the spread of the deadly virus.

The third wave is largely driven by a surge in cases within Gauteng, while the Western Cape has recorded the second highest number of cases. A general view of conditions at Helen Joseph Hospital on June 17 2021 in Johannesburg. Photo: Deon Raath/Rapport

Gauteng Premier David Makhura has been clear on his stance that closing the economy further would be detrimental.

“The various sectors of the economy are recovering well, and slowing down the economy is not an option. We continue to perform a balancing act of saving lives and livelihoods,” he during a press briefing this week.

The Gauteng government is looking at introducing targeted and localised restrictions for the next two weeks, while increasing staff personnel to deal with patients. It also plans to increase testing to clear those who may be infected.

The number of cases are a cause for concern in Johannesburg, Tshwane and Ekurhuleni.

Makhura said the province “is currently under fire”.

The third wave has seen Gauteng recording higher daily infections than during both the first and second waves, and one in every three people in the province is likely to be Covid-19-positive.

Government has emphasised that the increase in hospital admissions continues to place a strain on the health system in both the public and private sectors.

There has been widespread concern about the slow pace of the implementation of the vaccination programme.

In Gauteng, a total of 584 458 people have so far been vaccinated, which translates to only 28% of the targeted population. In the Northern Cape, a little more than 30 000 people have been vaccinated, as per data produced on Wednesday.

Acting Health Minister Mmamoloko Kubayi-Ngubane said that accelerating the vaccine roll-out was just one of the many strategies being employed by government.

She announced this week that pharmaceutical company Pfizer had committed to delivering more than 15.5 million doses of the Pfizer-BioNTech vaccine in the third quarter of the year and nearly 2.1 million doses next month.

READ: Gauteng teachers are pleased to be vaccinated

Johnson & Johnson delivered 1.2 million doses on Thursday night and government is awaiting confirmation of the delivery of 500 000 more.

“With this flow of vaccines, we will be able to press ahead with the vaccination of front line workers, sector by sector. We will then move on to workplace vaccinations in both the formal and informal sector.

“We will take guidance from the ministerial advisory committee on which of these sectors to prioritise and move along until all work-based vaccinations are completed,” she said.

“The vaccination of the education sector has pushed our daily vaccination numbers beyond the 100 000 mark. We are really pleased about this and, with the anticipated flow of vaccines to come, we are confident that we will be building towards that 300 000 daily target that the president has set for us.”

In a media briefing yesterday, Kubayi-Ngubane said that the Covid-19 Delta variant, which has become the dominant variant, transmits faster than both the initial virus and the Beta variant, which was first detected in South Africa.

“The Delta variant is actually more than twice as much transmissible as the initial variant,” Kubayi-Ngubane said.

She added, however, that the Pfizer-BioNTech vaccine had an 80% efficacy rate against the Delta variant.

She said this information on the Delta variant was shared with the national command council yesterday morning.

The council will meet with Ramaphosa today before he presents this information to the president’s coordinating council, the main coordinating body at national level, which consists of Ramaphosa, Deputy President David Mabuza, key ministers, premiers and the SA Local Government Association. 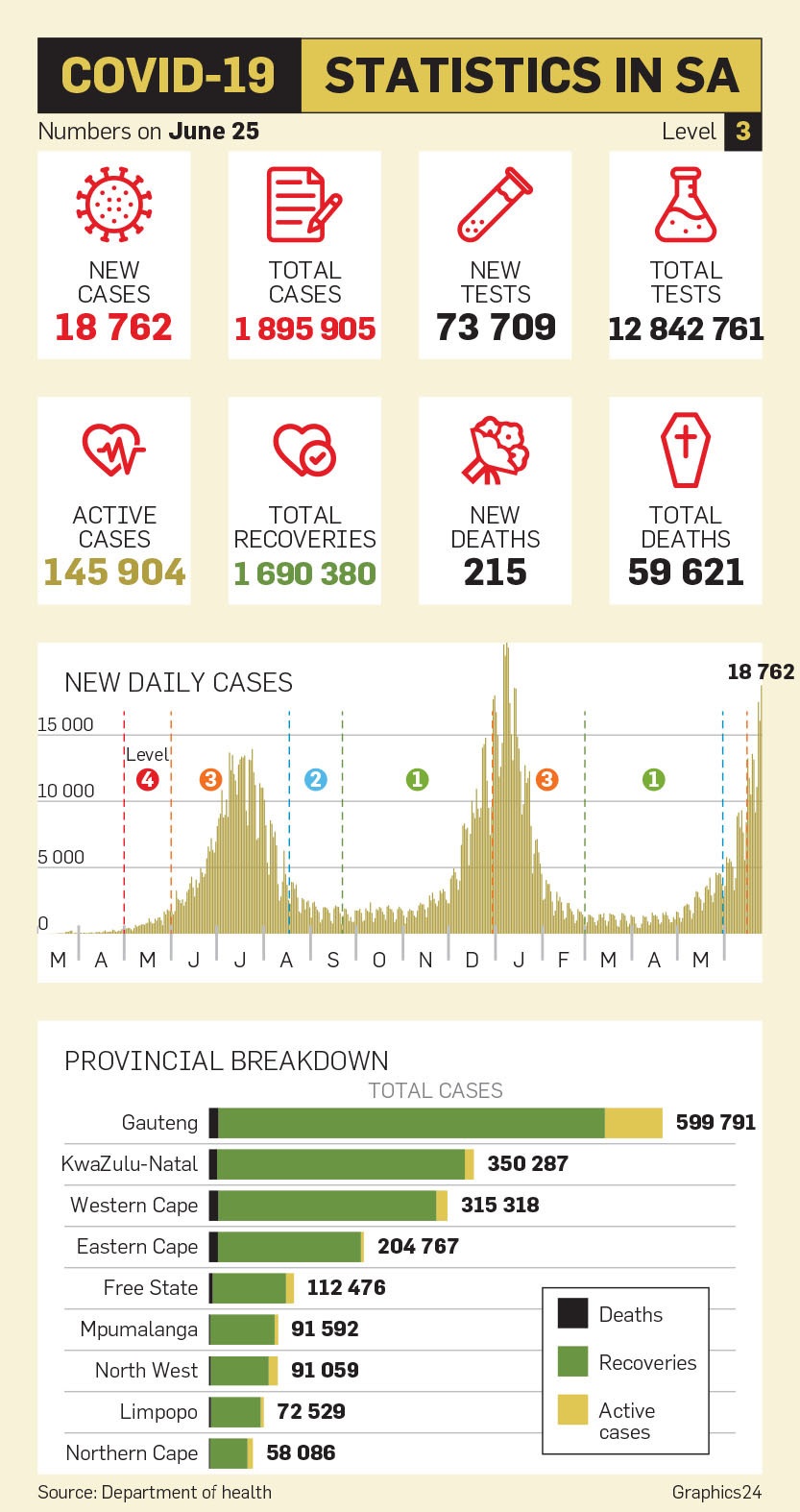