Mineral Resources Minister Gwede Mantashe was forced to abort a meeting in Xolobeni that turned violent, as a group of people opposed to mining clashed with those who supported mining development in the area.

The minister, who was both booed and cheered, had to be whisked out of the marquee along with AmaMpondo King Zanozuko Sigcau and other dignitaries as an already tense situation became uncontrollable and violent.

Police had to use stun grenades to disperse the crowds on Wednesday afternoon.

Some of the group that did not want the titanium mining to be introduced to the rural Mbizana village of Xolobeni under the Amadiba Administrative Area picked up chairs and started throwing them when a villager who claimed to be a member of the Amadiba Crisis Committee [ACC] turned against the anti-mining group and said he now supported mining.

Simlindile Matsheleza was the first person to speak from a group of 16 who had been chosen from the crowd to voice their views on the hot topic.

Others had formed a queue to speak after him when chaos ensued.

He said he used to be anti-mining too but when outsiders started infiltrating the ACC, he decided to change his tune.

Things become heated as members of the ACC claimed he was not part of the community.

In an interview afterwards, Matsheleza told City Press that he was from Xolobeni village. He said he feared for his life now that he had spoken out.

“I am so scared. Some of them said that they are going to kill me. So I am very scared,” said Matsheleza.

He said he wanted mining to take place in Xolobeni because it would bring development and create job opportunities. He could not say why he had opposed the mining.

“I just did not want it before because I heard people saying they don’t want it and that it was wrong. I don’t have a specific reason why I used to oppose it,” he said.

Mantashe, who was seated at the main table, stood up as ACC members started singing and picking up chairs, and announced that the meeting was closed. Earlier Mantashe delivered a report at the meeting which was held at the Xolobeni Sports Grounds.

A court last year ruled that the community of Xolobeni had a right to say no to the proposed mining development.

Mantashe told the crowd of about 2000 people who had packed the eight-pole marquee that his visit to Xolobeni was part of the consultation processes that the court said must be undertaken by his department in order to get the full consent of the community before a mining licence can be issued.

In an interview after the mayhem, Mantashe said the meeting had gone as planned.

“We came here to give a report of what has happened since the last meeting. We did that and completed it. That’s it, so what has happened here is that you are beginning to see cracks within the crisis committee [ACC] itself and you can’t help that. If there are cracks in the anti-mining group we will help them reconvene and unite,” said Mantashe.

The minister’s interview just outside the marquee was interrupted by the sounds of stun grenades that were fired from inside as police had their hands full trying to control a chanting, mostly anti-mining, group that demanded that Matsheleza should return to the meeting and explain himself.

Mantashe seemed unmoved. Journalists were eager to either run for cover or go see what was happening inside.

“What we are going to do now, is to conduct a survey in this area. The outcomes of that survey will be taken to court to be certified and then depending on what the majority says, then only at that point can we determine what to do next,” he said.

Heavily armed police had barricaded the entry points to the Xolobeni Sports Grounds where the meeting took place and people were searched for dangerous weapons.

Those with fighting sticks and knobkerries were told to leave them behind before they could make their way into the venue.

Thousands had braved the rainy weather and were in high spirits, singing struggle songs.

Sibusiso Mqadi, Amadiba Crisis Committee chairperson, said the whole thing had been staged and that they did not know who Matsheleza was.

“The way I see it this whole thing was planned. They already knew what this man was going to stand up and say. Even now I still don’t know the purpose of Gwede’s [Mantashe] visit except that he came here to ensure that we are divided as a community. Most of the people whom he invited in that meeting are not even from Xolobeni,” he said.

Meanwhile a seemingly aggressive AmaMpondo king Sigcau – who was booed by those who opposed mining – said he was not pro or anti anything. “It does not matter how much you shout. This is Faku’s land [the king’s forefather]. This is my land. The point that I am driving is that this Amadiba community is a vast community. I do believe that mining, agriculture, tourism can co-exist. 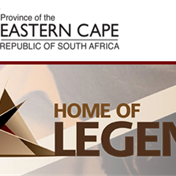