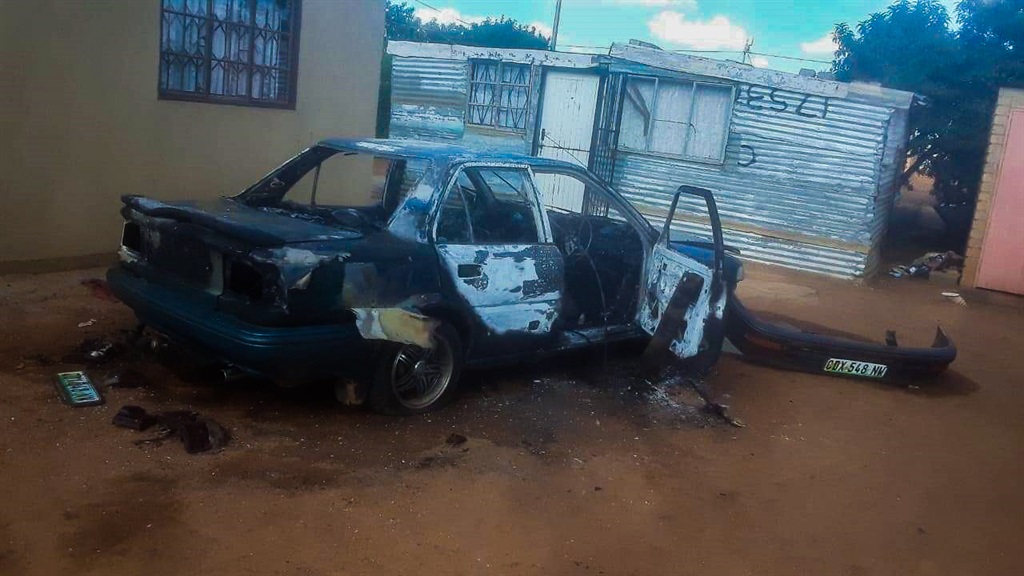 Of all the fire-damaged properties, police said very few owners of the torched houses and vehicles in the area have opened cases. Pictures: Facebook/Maklera Magazine

The torching of more houses and vehicles has possibly been prevented after two men were arrested in possession of petrol bombs and unlicensed firearms in the troubled Jouberton township in Klerksdorp, North West.

Police said four more houses were burnt down on Tuesday night, bringing to the total of destroyed homes to 11. Four vehicles were set on fire since Sunday.

Of all the damaged properties, very few owners had opened cases with the police amid fears that the suspected gang-related clashes were not over. “Three people have opened cases after their houses were burnt and only one case related to the torching of a vehicle was reported to the police,” said SA Police Service (SAPS) spokesperson Colonel Adele Myburgh.

Using the terror group names such as Al Qaeda, Boko Haram and Vietnam, the warring gangs clashed after a well known member of one of them had his German sedan torched.

Residents who wished not to be named, told City Press in telephonic interviews that it was known in the township that the gangs were formed to hijack tenders, especially those awarded to people from outside the Matlosana Local Municipality.

“The groups went from terrorising [members of] the public and foreign shopkeepers in the township and later resorted to tenders. They decided to impose companies owned by gang members to be awarded certain tenders. It appears the warring groups later clashed, which led to the torching of the first car.

“Then followed a series of acts of revenge which all left a trail of destruction in burnt properties,” said a resident whose neighbour’s house was among those set on fire.

But the provincial department of community safety and transport management had a different understanding of what sparked the violence.

“An innocent incident where two vehicles collided at a public drinking place has plunged the entire township into rampant acts of violence. [There was] an exchange of gunshots between the two people whose vehicles were involved in this unfortunate incident,” the department said in a statement.

It said according to the Matlosana Local Municipality the lawlessness that ensued was led by the local gang with the group running amok and destroying properties.

“It’s rumoured that there are four main groups operating under different names such as Al Qaeda, Boko Haram, DS and Vietnam. These gangsters forcibly entered the municipality and delivered a memorandum in which they demanded to be given tenders,” the department said.

Tensions remained high in the township on Wednesday after another evening of violence.

The SAPS said it would maintain a presence and patrol the area, adding that the situation was calm with roads that had been barricaded now open for traffic. Police said the third suspect, who was linked to one of the incidents, was arrested on Monday when the local police station was stormed by a group of people demanding to see the station commander.

A video clip circulating on social media showed one of the men inside the charge office trying to grab a firearm from the waist of a uniformed police officer.

“One of the gangs was accusing certain police officials of taking the sides. They wanted to address this with the station commissioner, but it all ended in a scuffle with the police [officers] who were trying to push the group outside,” said one community member.

Myburgh said one of the groups tried to storm the Matlosana municipal offices on Tuesday but “they were noticed and doors were locked before they could enter”.

We live in a world where facts and fiction get blurred
In times of uncertainty you need journalism you can trust. For 14 free days, you can have access to a world of in-depth analyses, investigative journalism, top opinions and a range of features. Journalism strengthens democracy. Invest in the future today. Thereafter you will be billed R75 per month. You can cancel anytime and if you cancel within 14 days you won't be billed.
Subscribe to News24
Related Links
North West premier keeps SIU waiting for green light to probe more corruption cases
Local government in South Africa is broken: but giving the job to residents carries risks
North West Sopa: Job Mokgoro promises to tackle corruption but fails to give update on section...
Next on City Press
Watch | Joburg’s Kaserne building implodes, temporary accommodation erected