Thandi Modise: ‘They think I am this stern aunty’ 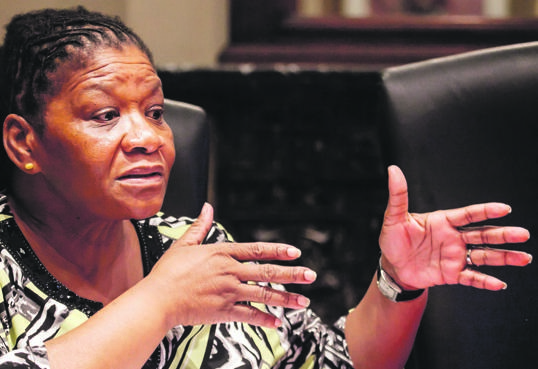 In this all-encompassing interview of the former “reluctant premier” of the North West and former chair of the National Council of Provinces, Modise gives us an insight into her mind: from fights with Madiba to the ANC's battle for its soul to bringing a gun to the first Parliament and silently laughing at MPs.

“Thina Batswana, the older you get, the more licence you have to speak your mind. And that is what I do. You speak your mind because usasaba ntoni? What have you not seen in the world?”

This is what national council of provinces (NCOP) chairperson Thandi Modise does in an interview last week as the sun begins to set on the fifth Parliament since the establishment of the new democratic dispensation in 1994.

She wears a dress with a bright blue shweshwe pattern that reminds me of what elderly women don when attending umcimbi (a traditional ceremony) at home.

She sits with her arms folded across her chest as she susses me out.

I do not detect a firearm, which is what Modise and Winnie Madikizela-Mandela brought along on their first day in Parliament almost 25 years ago.

Modise’s office is tasteful. It has grey velvet couches, and a South African flag sits on an imposing wooden desk.

It is a world away from the surroundings of her youth, exiled as she was in Angola, training for guerrilla warfare.

“I joined Umkhonto weSizwe when I was about 17 years old. Guerrilla training is different from normal military training; you must be prepared at any time to assume a leadership position. You must find solutions,” she says when asked how she prepares for each ANC deployment.

Every time I am thrown into a situation, I just say to myself: ‘I now need to understand the rules of this situation endingena kuso (which I am entering into) and take it from there.’
Thandi Modise

She emphasises important points in isiXhosa.

This week, Modise, alongside National Assembly Speaker Baleka Mbete and her deputy, Lechesa Tsenoli, will oversee the final state of the nation address (Sona) of the fifth Parliament.

At this time last year, the presiding officers stunned the nation by postponing it for the first time.

“The Sona that didn’t happen?” she says, covering her face and laughing when asked about it.

“We were quite calm about it. We had been forewarned that it was going to be rougher than usual. We took a trip to Tuynhuys and met with the president. Our view was that we do not go ahead with it because we were tired of seeing disruptions and getting bad publicity. ‘Let us give you guys a chance to do whatever you need to do,’ we told then president Jacob Zuma. It was a short, amicable meeting as he agreed with us. We all said that what happens on the floor of Parliament reflects on the wellbeing of South Africa.”

Modise repeatedly shifts forward and back in her seat to find a comfortable position. Besides a simple gold watch, she wears no jewellery.

Her face is free of makeup and her long dreadlocks are gathered in two thick, neat plaits that run down the back of her head.

Asked about the current state of the ANC, the former “reluctant premier” of the North West says the party’s growth allowed unsavoury characters to slip in.

“I have not been surprised because as we opened up the party, opportunists came in. They may not have had the advantage of getting the full ANC education, like some of us did. You serve the people, not the leader. There is a difference,” she says. “I am shocked at the things that are coming out. You look at the whole Bosasa saga and get shocked that here, among our ranks, this can actually happen.

“I am not judging because the story is still unfolding and you don’t know if there are exaggerations. But whatever it is, I do know and believe that the ANC I joined as a young woman will rise to the occasion and will cleanse itself. Because we have to do it.”

Modise speaks of the ANC as an inheritance that must be left in good condition.

“I used to have fights; I was defiant when I was younger. One day, while I was in the middle of a fight with Madiba, I said: ‘Nyan nyan, I don’t know what you want.’ He replied: ‘Mtanam ayinofela ezandleni zami iANC.’ (I cannot allow the ANC to die on my watch.)”

What do South Africans not know about her?

“They think that I am this very stern aunty,” she says, adding after a long pause: “But I can get emotional. I wish Parliament, especially the NCOP, did more about the issue of children, especially orphaned children and young girls in the rural areas, and that we relooked at laws that prevent or regulate drug-dealing, alcohol consumption and gambling.

“These three contribute to violence against children and women. For me, that is something which, if ever I retire, I would want to give my life to preventing.

Sometimes South Africa must not be scared to go back. Were we right when we outlawed [corporal] punishment for children at home and at school?
Thandi Modise

She also insists that Parliament needs to advocate more for an overhaul of higher education, which is failing to produce job-ready graduates.

Although she denies having any regrets over decisions she took this term, she says: “I hope that the sixth Parliament will not see members dragged out of the House. I hope that we will never see MPs fighting on the floor of the House.

“I wish that we would go back to defining why members of the House are called ‘honourable’.

“Parties bleed MPs across the board every five years. When you do not retain people, you create a situation where there is too much competition, where it is a case of: ‘I feel I need to impress my party bosses. I must be loud and prove that I can denigrate the other parties better.’”

Modise laments that MPs have not found a way to put South Africa before their parties.

While Mbete and Tsenoli sometimes allow themselves a laugh at the shenanigans playing out on the floor, Modise rarely lets her poker face slip.

“I have trained my face not to show when something hilarious is happening,” she says, chuckling.

“I sometimes laugh when members of Parliament have a party line and you can see the difference between the mouth and the eyes. You see someone is saying something but doesn’t really believe it.

“More often, if it is men, they will start off by clearing their throat. Then you know that this is a party line and not a personal conviction.” On the sixth Parliament

Does she have the energy for the sixth Parliament?

“I won’t say no to one more term. But then, you know, wherever they place you is fine.”

Is it not time for young blood to take over?

“The country is at a point where, even if you want to leave, you feel guilty. You do not want to feel like you are running away because things are not so good.

“The economy is not doing well, and neither is your politics – do you simply hand over and go away or do you want to say, ‘If they feel that I can still continue, I will stick around’?

“If they tell me to go, I would like to go and do things. I have a book to write, I have poems to finish. I write in both English and Setswana, so that is what I would do.”

As we part ways, she says: “Ke a leboga.” It is the first time she has used her mother tongue.

Related Links
‘Nothing untoward’: Zuma snubs state of the nation address
No-frills state of the nation on the cards as Parly slashes costs
When the teflon president fell
Share
Next on City Press
Post office board chair threatens Ndabeni-Abrahams with legal action over ‘abuse of power’