he public land debate is coloured by inflamed rhetoric, crude proposals and dire warnings. The Economic Freedom Fighters (EFF) beats its monotonous, if hypnotic, drum of expropriation and nationalisation. The Zulu king summons the spirits of defeated Zulu regiments in veiled threats of violence to protect his own narrow interests. The president takes refuge behind biblical imagery while the ANC leadership dithers. A self-promoting chairman of the land committee calls for a million new restitution claims to be lodged at the risk of turning the current morass of unresolved claims into a sink hole of immeasurable proportions.

Fortunately, a survey conducted by Media24 suggests that, although the association of radical land reform with quick fixes for profound problems has had some effect, the public has a rather more sophisticated grasp of issues than many political leaders think.

The survey was conducted by Forum24, Media24 News’ in-house research unit. It used a panel method and is not a representative random survey. The results were weighted to the population who have online access. The research offers a good spread of provinces, ages, ethnicity and income levels to give a view of South African adults very close to the national profile of the population.

Although it is suggestive rather than definitive, the same methodology accurately predicted the outcome of the 2016 local government elections. It differentiates the responses of blacks, coloureds, Indians and whites. This terminology may offend some readers but it does provide a more nuanced view of attitudes.

The questions ranged from the very broad to the more specific. The question “Do you want to farm” received support from 71% of the black population but it is so vaguely phrased that it is difficult to judge what the responses imply. Do people living in town want to move to rural areas? Is the expectation that people will be given viable commercial farms, or assisted to start household gardens on existing stands or something in between? There is anecdotal evidence that suggests some people would like to be given land as an addition rather than an alternative to the current means of earning a living. When broken down by ethnicity this number dropped to 46% among blacks but climbed steeply to 69% for coloureds, 71% for Indians and 89% for whites. Most respondents wanted land reform to have positive outcomes for economic growth. Seventy-nine percent agreed the main purpose of land reform should be to provide food security, jobs and exports. An even more overwhelming majority – including 83% of blacks – believe that the most important role that white farmers can play is to mentor new black farmers.

However levels of support for the parties most prominently engaged in the debates sits uneasily with these perspectives. The EFF is viewed by 33% of the sample as having the most viable solution for our land issue, the ANC trails at 19% and the Inkatha Freedom Party barely registers with a mere 1%. But the largest number – 35% – believes that none of the parties offers a realistic solution. These responses give a sense of the stormy surface of the debate and the sometimes contradictory eddies. However, other sections of the survey provide insights into deeper and enduring currents of attitude and aspiration. When asked to rank the most pressing priorities for the country; controlling crime, improving education and health services, reducing corruption and creating jobs enjoyed support levels well above 80%. Land reform lagged far behind with 44% support. It did receive 53% support among black respondents, but still ranked far below the other issues. This pattern of priorities has been an enduring feature of polling results since the 1990s. If land is not specifically listed as an issue, its relative importance tends to be even lower on people’s lists of priorities. The somewhat higher levels achieved in this survey might reflect the growing emphasis on the land in public debate. However, despite the presently high profile of land reform, the vast majority of respondents – including 68% of blacks – still think that it is more important to create jobs for the youth than to provide them with land. 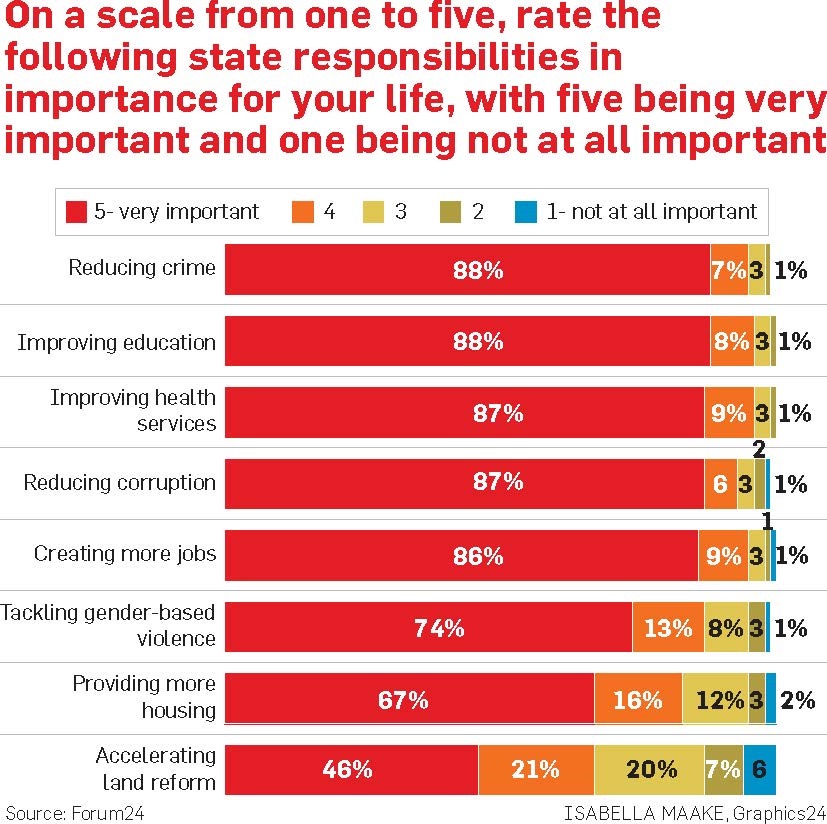 While the EFF has the highest support for its overall policies, the leadership might be a little disconcerted to read that a mere 15% believe that the land should be state-owned. The fact that only 4% agreed that land should be owned by traditional leaders – rising to a mere 6% in KwaZulu-Natal – will probably do little to quiet the king’s bellicose rhetoric. However, the fact that 83% of black respondents believe land should be held on an individual or family basis should give pause for thought to those inclined to prostrate themselves at the feet of traditional leaders at the first whiff of royal resistance. Strong support for the proposition that land reform should include urban as well as rural land will encourage political parties to think harder about the allocation of land in and near towns and cities.

The land debate has so far been conducted largely in terms of competing slogans accompanied by, at best, skeletal policy proposals. The public hearings have, though, allowed individuals and communities, deeply scarred by the dispossession of their land and their interminable wait for its restitution, to express their pain and anger. It is also likely that the land issue has become for many people a shorthand expression of their dashed expectations that the coming of democracy would usher in a new era of opportunity for all South Africans.

But the overwhelming and enduring priority that the vast majority of South Africans place on improvements in the control of crime, the quality of healthcare and education, and levels of employment should be a warning to leaders who routinely resort to populist and inflammatory rhetoric. Politicians who seek easy popularity through simplistic proposals, racist rhetoric and the offer of quick fixes might achieve short-term prominence. But their support might evaporate like morning mist under a scorching sun if the implementation of land reform diminishes rather than enhances the quality of life of the majority of our people.

We live in a world where facts and fiction get blurred
In times of uncertainty you need journalism you can trust. For 14 free days, you can have access to a world of in-depth analyses, investigative journalism, top opinions and a range of features. Journalism strengthens democracy. Invest in the future today. Thereafter you will be billed R75 per month. You can cancel anytime and if you cancel within 14 days you won't be billed.
Subscribe to News24
Related Links
Separate the wheat from the chaff on land debate
Despair after land and a future are stolen
We want our own land
Next on City Press
Torching of Bushbuckridge offices might be a cover-up for corruption