Tembisa, a day after the township erupted in a violent protest for affordable electricity and service delivery. Photo: Tebogo Letsie/City Press

The traffic cop who allegedly shot and killed Linda Shabalala during the protest in Tembisa in Ekurhuleni on Monday, was back in the area on Tuesday.

Residents, who said they witnessed the shooting, claimed they saw the Ekhuruleni Metro Police Department (EMPD) member patrolling the area on Tuesday.

We saw the person, and we took a video of him. He is even here today [Tuesday], and maybe he thinks we do not remember him.

The 52-year-old Shabalala, who rented a backroom at the Masinga residence for about three months, was allegedly shot at close range by an EMPD member.

“I saw the person who shot him. He first pointed the gun at me and my sister’s child. He aggressively told us to go inside the house, and we just remained outside. Brother [the deceased] was taking photos, and the guy shot him at close range. It was live ammunition, a shotgun,” said Masinga.

“I think he just wanted to run to his room, and he fell to the ground. When we checked him, he was still breathing but his soul left the body after 15 minutes,” said Masinga, pointing at the scene covered with boxes and bricks in the yard where Shabalala died.

Landlord Shirley Mokansi said they were traumatised and wanted justice to be served:

We are traumatised because we saw what happened. This officer came straight here and shot the deceased when he was inside the yard. We can’t cope. We opened a case yesterday, and the police are working on it. Justice must take over, they must arrest this guy because we assume he planned this.

Mokansi and Masinga described Shabalala as a quiet person who did not have a problem with anyone. They took him as a brother because he was the only older person they had in the yard.

Mokansi said no official had visited the family since the shooting on Monday. 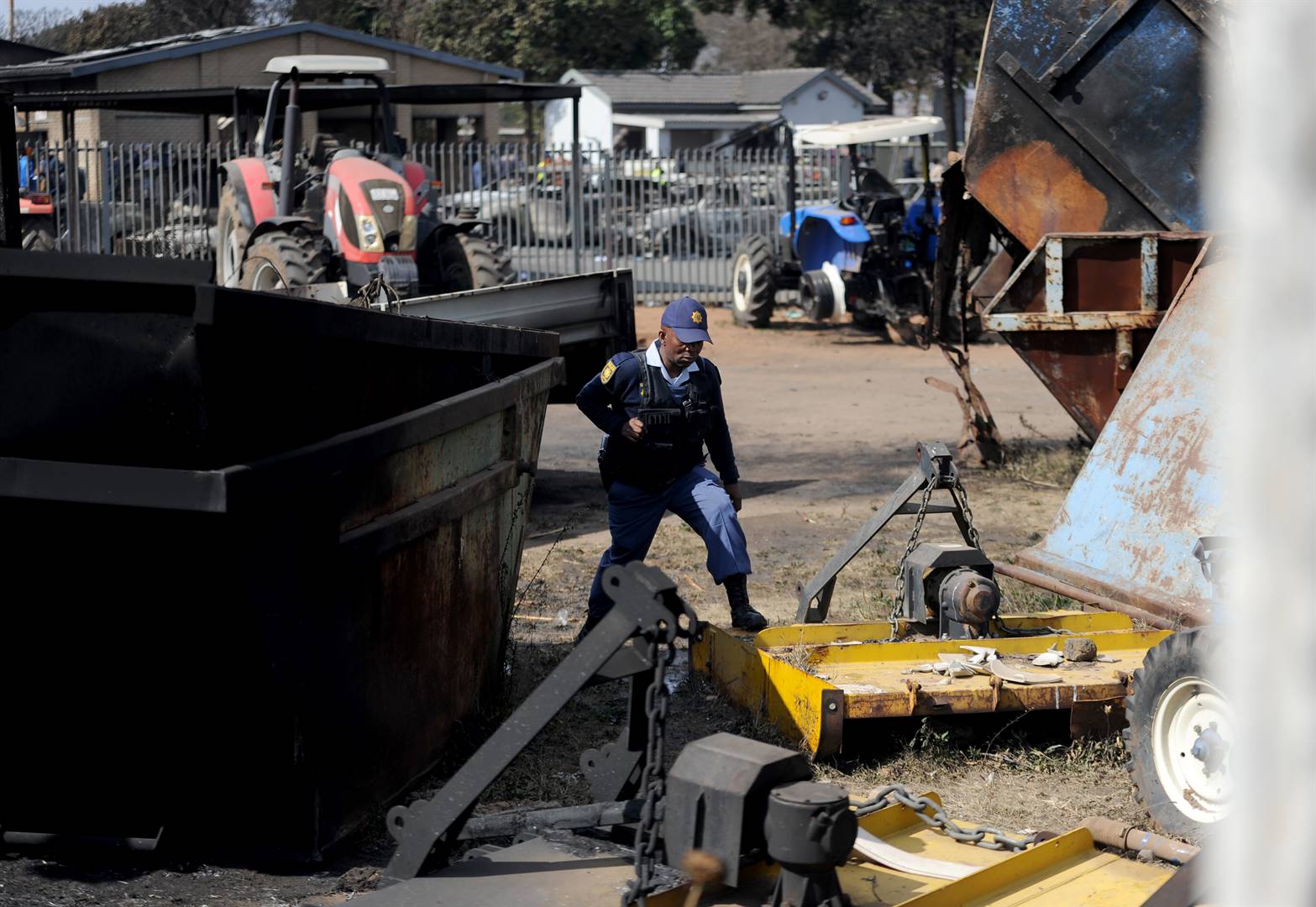 They said Shabalala, who came from Wattville in Ekurhuleni, had two children he talked about all the time. His family members had not yet made it to Tembisa.

Following Monday’s protest in Tembisa, the death toll has risen to four. While two of the deaths are said to be linked to the police, the other two were alleged as a result of criminal acts, while the suspects were trying to bomb an ATM.

Walking onto the premises, you notice the blood of the two deceased – one spot just outside the gate, and the other inside the premises.

While trying to make sense of what happened, two family members of one of the deceased walked in to ask for permission to traditionally collect the spirit of their relative.

The brother, who did not want to be named, said he did not have enough information on how his brother died. He told City Press that he was the one who covered his dead body with boxes. He was with a visibly devastated aunt who said he came to Tembisa on Tuesday from Daveyton, also in Ekurhuleni.

Said the aunt who did not want to be named:

We would like to give you more details, but as you can see, we also do not have any information. He rented a place with his brother around here.

The aunt said from the community centre, they were headed to the police station to prove that they were related to the deceased. This would allow them to get a formal letter to start with the burial preparations. She added that they did not blame anyone for how their family member died.

Ekurhuleni Member of Mayoral Committee for Community Safety, Letlhogonolo Moseki, confirmed that 31 cars were torched, and that four had died.

Independent Police Investigating Directorate (Ipid) spokesperson Lizzy Suping said Ipid was aware of the deaths linked to the police, and an investigation was underway.

We must make sure that our investigation can be able to indicate whether live ammunition was used and if it was by the police as alleged by the community.

Although some streets were still barricaded by burning tyres, stones and bricks as well as vandalised traffic signs and street poles, the situation was almost back to normal and calmer on Tuesday compared to Monday’s riots which saw municipality offices being burnt down.

Most areas in Tembisa were without electricity on Tuesday.

EMPD spokesperson, Kelebogile Thepa said they were aware of the allegations made against their own.

“We have been made aware of such allegations, and we have summoned the Ipid to commence their investigation in which dockets have been opened and registered. Also, as the EMPD we are running our internal investigation under the internal affairs unit. Something is being done by both, and such processes are running parallel so one doesn’t want to impose on the other.”

She said that no police used live ammunition on community members to stop them from protesting. The protest in Tembisa led to the death of four people and the burning of municipal property including vehicles. Photo: Tebogo Letsie/City Press
We live in a world where facts and fiction get blurred
In times of uncertainty you need journalism you can trust. For 14 free days, you can have access to a world of in-depth analyses, investigative journalism, top opinions and a range of features. Journalism strengthens democracy. Invest in the future today. Thereafter you will be billed R75 per month. You can cancel anytime and if you cancel within 14 days you won't be billed.
Subscribe to News24
Next on City Press
Al Jama-ah loses leave to appeal Shadrack Sibiya's interdict