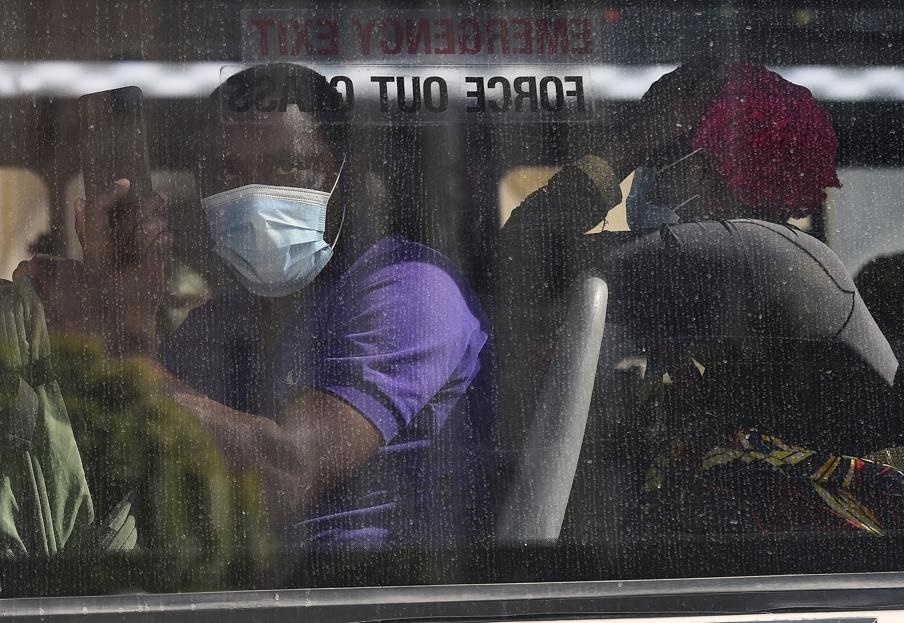 Foreign migrants wait on a bus after police removed them from the Central Methodist Church in Cape Town. Picture: AP Photo

Tiwonge Chimbalanga, like many refugees in the country, is growing worried as food runs out and there is limited support during the Covid-19 coronavirus lockdown.

The 27-year-old transgender woman, who lives in Manenberg township in Cape Town, says the lockdown has been tough.

“I work at a homeless shelter which is closed now so the money I normally get is not coming anymore. I have not eaten in two days.”

Originally from Malawi, Chimbalanga has been in South Africa for 10 years.

While there are instances of refugees and migrants facing specific discrimination under lockdown, we have also noted the unifying nature of the lockdown.
Sally Gandar

I decided to search online for refugee centres that are helping people such as Chimbalanga with basic needs like food. I came across the Scalabrini Centre of Cape Town, a non-governmental organisation which notified its clients on its website that it is closed until further notice because of the pandemic.

Chimbalanga says as a refugee transgender woman, before the lockdown she sought help from organisations that help members of the LGBTI+ community in Cape Town.

Most had similar announcements and she didn’t know where to go for help.

Sally Gandar, head of advocacy and legal adviser at the Scalabrini Centre says: “Since the lockdown commenced we’ve started an advocacy hotline. Many refugee and asylum communities share the same concerns as South Africans – employment, survival, safety and health.

“But specific to the refugee community are concerns around documents that have expired during the lockdown as the refugee reception offices are closed. This has resulted in some refugees and asylum seekers’ bank accounts being frozen.”

Gandar says between 4% and 6% of people in South Africa were born in other countries.

While government has been widely praised for its coordinated response to the pandemic, some activists are concerned that the regulations are not explicitly when it comes to refugees and asylum seekers.

“In any public health response, there needs to be a whole-of-society approach,” she says. “It is imperative that the discourse [in tackling the pandemic] is inclusive if it is to be fully effective, because exclusions can implicitly lead to xenophobic tendencies. We are aware that some of our clients are fearful that during lockdown xenophobic tensions might resurface.”

She adds: “While there are instances of refugees and migrants facing specific discrimination under lockdown, we have also noted the unifying nature of the lockdown.”

She gave the example of a caregiver from Zimbabwe who told the centre that she has a 99-year-old patient who lives alone and if she didn’t go to work she doesn’t know how they would cope.

On Tuesday, the department of home affairs temporarily extended the visas of foreign nationals during the national lockdown.

In a statement, the department said that immigrants whose visas expired from mid-February would not be penalised until the end of the lockdown on April 30.

The exemption also applies to those with pending applications who will be allowed to study, work or conduct business.

Gandar says before the announcement this week, some of their clients were already facing challenges at work and at clinics when they sought treatment.

“A refugee hospital worker, whose document [permit] expired this week, was told by her employer that although they understand the situation, legally she cannot come to work until her document is renewed.

“This is distressing as it robs South Africa of a critical essential service worker at a time when they’re most needed,” says Gandar.

NGOs have stepped in to provide support and essential such as food for those who cannot work.

“Our welfare programme has been inundated with requests, which is likely true for other NGOs offering social assistance.”

Social development platform Femme Projects has been on a fund-raising drive to help support shelters and feminist-led initiatives.

The money raised will buy sanitisers, toiletries, food and reusable pads. It has also been actively spreading information and delivering the basic goods around Cape Town over the past two weeks.

Melanie Nathan, executive director of the African Human Rights Commission, says they are getting requests for help with food and shelter from across the continent.

As an organisation that focuses on the advocacy and support for the LGBTI+ refugees, their hope is that the community can benefit from local shelters and food programmes and that clinics and hospitals do not discriminate against their clients.

We live in a world where facts and fiction get blurred
In times of uncertainty you need journalism you can trust. For only R75 per month, you have access to a world of in-depth analyses, investigative journalism, top opinions and a range of features. Journalism strengthens democracy. Invest in the future today.
Subscribe to News24
Related Links
Migrant worker exodus undermines Covid-19 lockdown
Next on City Press
Ramaphosa self-quarantining following possible exposure to Covid-19 Read more on:
cape townrefugeetransgendercovid-19coronavirus
Podcasts
Podcast | How to pay off your home and car

Choose a newsletter
Voting Booth
Thousands of Gauteng motorists who refuse to pay their e-tolls could be fined R500 every time they drive under a toll gantry from July next year. In addition, they will have to pay a R100 levy for every one of these fines.
Please select an option Oops! Something went wrong, please try again later.
e-tolls must be scrapped
72% - 34 votes
I still won’t comply
15% - 7 votes
I’ll do my duty and avoid fines
4% - 2 votes
Good idea to help the economy
9% - 4 votes
Previous Results
Dumisane Lubisi
Tributes from friends and colleagues of Dumisane Lubisi