Voters have spoken. SA waits as election results trickle in And now they await the results, which officials have said could be announced on Saturday.

The vote for a new Parliament and nine provincial legislatures is the toughest electoral test yet for the ANC, which is hoping to reverse or at least arrest a slide in support.

As South Africans were mulling over their options, the Daily Maverick broke the news on Tuesday that a Russian agency had been involved in a plan hatched to create a disinformation campaign that favoured the ANC and put out propaganda against the opposition DA and EFF for the 2019 election.

The elections are the first test of national sentiment since President Cyril Ramaphosa replaced scandal-plagued Jacob Zuma as head of state in February 2018 after four years as his deputy.

For a full view of what happened on voting day see our elections page here: SA Elections 2019

“I’m a member of the ANC but I didn’t vote for them this time,” said construction worker Thabo Makhene (32), in the commercial hub of Johannesburg.

“They need to catch a wake-up. The way they run the state, mishandling state funds, they’ve lost their morals.”

Queues built up at polling stations throughout the day, and some voting stations, such as those at the University of the Witwatersrand and in Alexandra, still had long queues at 9pm. The independent Electoral Commission said voters in the queue would still be allowed to cast their votes.

The commission said it was “extremely pleased with the smooth progress of voting today”.

There were incidents where voting operations were adversely affected by inclement weather, community unrest, power outages and some logistical challenges, but overall, it described the elections as a success.

Some polling stations around Johannesburg opened late or did not have voting materials, while in the Western Cape Province officials said ballot papers were running out at some locations.

Five of the more than 22 000 polling stations had still not opened as of 5pm due to unrest in the communities, the electoral commission said without elaborating, only saying that efforts were being made to resolve the issues.

At 11pm last night the IEC confirmed that they were investigating two allegations of double voting. "Two separate instances have been brought to the attention of the Electoral Commission over the past few hours in which it is alleged voters were able to cast more than one vote at different voting stations," the commission said on it's official Twitter account. However, the commission said that the election process contains a few safeguards and checks which would "protect the integrity of the process."

By midnight the first set of results trickled in from Umzimvubu, Eastern Cape which placed ANC in pole position with 11 votes and the EFF with eight votes, while the United Democratic Movement managed to get two votes. The African Transformation Movement, formed last year, secured it's first ever vote. 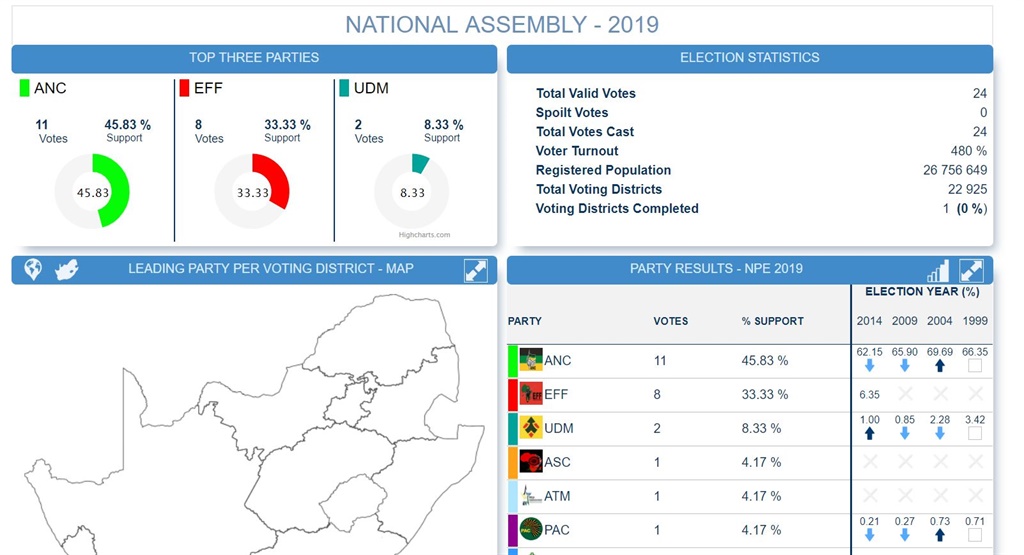 An age of discontent

Opinion polls suggest the ANC will again win a majority of the National Assembly’s 400 seats but analysts say its margin of victory may fall as efforts to address racial disparities in land ownership, housing and services falter. The country remains one of the most unequal in the world, according to the World Bank.

Joblessness, with more than 27% out of work, high crime and corruption have also fuelled discontent.

“The weather changes everyday, why can’t we?” he said as he waited to vote in the township of Soweto in Johannesburg.

In Cape Town, Anneke du Plessis (43), who works at a media company, said her vote was to end corruption.

“We have to unite and stop this downward spiral. This is the most important vote since 1994,” she said.

Some voters said they would back the ANC.

“They have made mistakes before but this time we have the right man,” said Alpheus Zihle (69), a pensioner in Alexandra in Johannesburg.

#SAElections2019 With less than three hours to go before polls close, here's what some party leaders had to say to encourage voters pic.twitter.com/aXLeIlv5Au

Hundreds of people covered in blankets and coats in the chilly winter morning gathered outside a polling station in Soweto, where Ramaphosa cast his vote.

“We’ve made mistakes, but we are sorry about those mistakes, and we are saying our people should reinvest their confidence in us,” the president said.

“We are going to correct the bad ways of the past.”

Read: Now we know where we have gone wrong, we will correct it – Ramaphosa

The ANC’s biggest challengers are the main opposition party the Democratic Alliance (DA) and the leftist Economic Freedom Fighters (EFF).

Analysts have put that falling support down to graft allegations against government officials, a slowing economy, high unemployment and demands from black citizens for more equitable distribution of land.

Ramaphosa – who became ANC leader after narrowly defeating a faction allied with Zuma – has promised to improve service delivery, create jobs and fight corruption. But his reforms have been held up by divisions and opposition within his own party.

Africa’s most industrialised economy grew at an estimated 0.8% in 2018 after recovering from a recession in the first half of the year when a drought hit farming, although blackouts at power utility Eskom continue to drag on activity. Growth is forecast at 1.5% this year.

Voting in pictures: South Africans and political leaders at the polls

The centre-right DA won 22% of the parliamentary vote in 2014. It appointed its first black leader Mmusi Maimane in 2015 and made headlines by leading coalition victories in local government elections in Pretoria and Johannesburg a year later.

But splits within the party could see its support wane.

“Fear says to us let’s stick with what we know, hope says let’s bring change,” Maimane said after casting his ballot in Soweto, where he grew up.

Read: ‘Let Mmusi run the country to take it forward, clean it up’: Maimane

The EFF’s leader Julius Malema, a fiery orator who formed the party in 2013 after he was expelled from the ANC, cast his vote in the northern city of Polokwane.

“If you need change, the EFF is the way to go,” said Malema, whose party won 6% of the vote in 2014, making it the third-largest presence in Parliament.

Read: ‘All these people who are queuing are here to change government’: Shivambu

It wants to nationalise mines and banks, and played a key role in holding Zuma to account for spending state money on non-security upgrades to his private residence.

But assurances of change were not enough for some voters.

“When it comes to election time, everyone is going to say they are going to do this and that for you. But once they get the votes ... there’s not much done,” said 30-year-old Nathen Irusan in the town of Tongaat, about 37 kilometres north of Durban. – Reuters, additional reporting by City Press

We live in a world where facts and fiction get blurred
In times of uncertainty you need journalism you can trust. For only R75 per month, you have access to a world of in-depth analyses, investigative journalism, top opinions and a range of features. Journalism strengthens democracy. Invest in the future today.
Subscribe to News24
Related Links
‘Not much has changed’ – Vuwani youth not convinced to vote
Funding an elections campaign is not child’s play, says Mashatile
‘Our last resort’: Kidnapped journalist’s family pleads with Ramaphosa for help
Next on City Press
Newly appointed Joburg Mayor Jolidee Matongo has died