Some soldiers are seriously thinking about joining the “terrorists” of al-Shabaab in Somalia. Picture: Public Disservice

Lack of state services and protection encourages despair and militancy

The reason why Somali soldier Ali (20) is seriously thinking about joining the “terrorists” of al-Shabaab who are waging a violent insurgency in his country, often with terrorist methods, is that he doesn’t receive a salary from his government; he hasn’t for months.

“We don’t even get weapons. The government is not committed to us in this war. It would be easier for me to be with the ‘boys’,” (common jargon for al-Shabaab) he says as we meet him – a cigarette dangling from his mouth, his uniform dirty – at a roadblock on our way to the Middle Shabelle region that is partly controlled by al-Shabaab.

“My parents live close by here. If I joined the boys, I could at least visit them without getting killed.”

A transnational investigation by the African Investigative Publishing Collective (AIPC) into state capability in six African countries has shown that state neglect and wastage of budgets for citizens’ services lead to despair, alienation and, in the worst cases, to young men taking up arms against governments.

In Somalia, team member Muno Gedi interviewed several soldiers who either considered joining the terrorists or had already done so.

In contrast, militants were seen as more organised.

“Al-Shabab is not good but at least I will not live with fear,” said one soldier called Abdinur (27), who was interviewed at an army camp in Middle Shabelle.

"A number of interviewees higher up the ranks in the army, among them Abdinur, a deputy commander at a battalion in the capital Mogadishu and a source at the Somali National Intelligence Agency, expressed scorn for the government, saying they were aware that the army received millions in support from donor countries, but that only the “president and the prime minister know where it goes” and that the money was used for “their private projects”.

He said he was much happier since he had deserted.

“All the safest places are under the control of al-Shabaab. It is only here that I can be safe and get a little salary,” he said, adding that he “had lost his two best friends because the government won’t give us equipment”.

The transnational team found that state neglect and disservice were also a factor in militancy and insurgency in Mali and Cameroon in West Africa.

After years of neglect by the central government in Cameroon, an armed insurgency aimed at independence in the western region has recently emerged.

Team member Chief Bisong Etahoben, who reported in Cameroon, traced a set of state projects meant to assist citizens, which had been bankrupted by the government in the past 20 years.

These included an agricultural grains development project that had, according to previous staff members, paid for ruling party officials’ “voyages, weddings and baptisms”, and the national airline where the “usual godfathers” had “given all the jobs to unskilled relatives” and “helped themselves to free air tickets for themselves and their families”; as well as two rural farmers’ loan schemes.

In the last case, according to a senior official in the finance ministry who spoke to Chief Etahoben, “government and ruling party officials had borrowed large sums of money, knowing they would never pay back”.

Very recently, Cameroon also lost the opportunity to host the Africa Cup of Nations after budgets for stadiums and hotels had been spent without delivering the needed infrastructure.

CHILDREN ONLY RECEIVE THREE SPOONS OF PORRIDGE EVERY OTHER DAY

In Mali, meanwhile, a school meal programme specifically designed to keep children in school and away from armed militias who recruit among the unemployed population is failing.

Teacher Ousmane Dicko, interviewed by reporter David Dembélé in one of the deprived schools in north-eastern Youwarou, where children only receive three spoons of porridge every other day, said that “schools were even closing” since “the municipality keeps half of the grain for itself”.

The mother of Samerou, a 12-year-old boy in Douentza in Mali’s north, despaired about the future of her son if he remained uneducated, but said he was simply too hungry to “go and also find no food at school”. Interviewed locals and school teachers in three different regions of Mali pointed at local government officials keeping the money and food or selling the food for their own accounts, instead of distributing it to the schools.

Trying to trace budgets and food, Dembélé found that regional state officials were unwilling to answer any questions about the disappearances, while no control at all was exercised by the central administration over the distribution of them. The National Centre for School Canteens (CNCS), which officially manages the programme, told Dembélé that “they don’t track” food or money.

Meanwhile, the chief executive officer (CEO) of the CNCS, Sarmoye Boussanga, a man known for his loyalty to the country’s president, insisted that all was working well.

In Kenya, the AIPC team found no militancy but despair as they interviewed patients who were unable to pay for medical care.

Esther Wambui, a patient at the Kenyatta Hospital in Nairobi, told team member Joy Kirigia that she could not afford chemotherapy treatment for her cervical cancer.

Wambui’s sister Gladys Mwihaki, who makes $4 (R15.72) a day as a washer woman, told Kirigia that “all Esther does is cry all night and we just don’t have the money”.

The Kenyan state has, however, spent large sums on – largely superfluous – medical machines such as X-ray and CT scan equipment for certain hospitals.

The machines are sourced from big pharmaceutical companies in a “medical equipment supplies” scheme – at a cost, so far, of $257 million – that has become notorious in Kenya for its opacity, lack of consultation and suspicions of kickbacks for state officials. 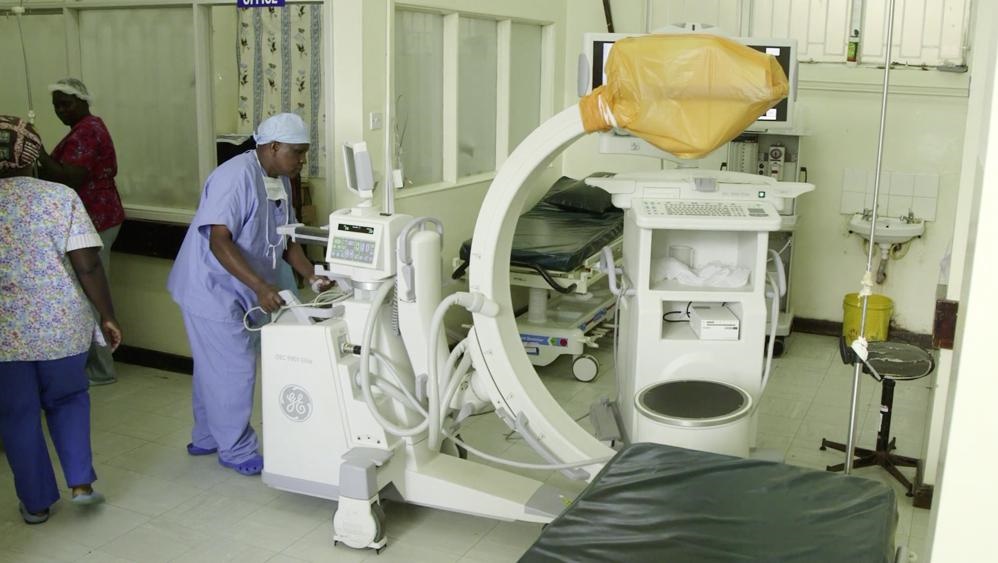 In Kenya, medical equipment distribution is notorious for kickbacks

Kenya’s Senate Finance Committee found last year that at least half of the hospitals that had been listed in the contract as recipients, but had never been consulted, had not utilised the equipment, because they either did not have the trained personnel or even the electricity to use them, or already had similar machines.

Kenya’s Auditor-General Edward Ouko told reporter Kirigia that “in some cases we have gone to [regions] when things were delivered, but there is actually nothing there or there is something but [it is] in boxes”.

Repeated attempts by Kirigia to obtain comment from the ministry of health were unsuccessful and the contracts with the pharmaceutical companies remain undisclosed.

The payments of Kenyan taxpayers’ money to the pharmaceutical companies are nevertheless continuing: at least another $118 million is still to be spent on similar equipment.

According to figures from the ministry’s human resources strategy, an estimated 165 000 patients die in the country annually of diseases such as cancer, TB, Aids and pneumonia, many of them under similar conditions as Wambui, without receiving needed treatment.

In Nigeria, similarly, budgets meant to provide primary health care, as well as education and other services on local levels, were found “trapped” in a gigantic bureaucracy.

Earlier this year the local Premium Times revealed, based on a data search of government budgets, that close to $4 billion in annual government allocations for local municipalities had not been paid by Nigeria’s federal state authorities to the local level in the past twelve years.

A spokesperson for Kogi state governor Attai Aidoko, approached by reporter Theophilus Abbah to comment on the dilapidated state of a clinic in that region, said that the governor “had done his best to bring that project to his constituents” and blamed the “local level” for the fact that the clinic had never served any patients.

The team found that corruption was not always to blame for the money wastages; it was often a question of dysfunctional systems and bad governance, which, as was also noted, create more opportunities for those who do want to steal.

Ghana, for example, has repeatedly invested millions of dollars in tomato canning factories, meant to process the harvests of the country’s famed tomato farmers, who in the northern regions make up 70% of the economically active population. However, bad management of the canning projects has led to bankruptcies and a halt to operations every time.

A 2010 research study by the International Food Policy Research Institute in Washington, the US capital, mentions “frequent breakdowns resulting from a lack of spare parts and obsolete machinery, lack of technical competence, bad financial management and poor marketing” as causes for the failures.

FRUSTRATION WILL FORCE YOU TO COMMIT SUICIDE

Since at least 2007, absent or failed government assistance to the tomato farmers has led to suicides. Interviewed by reporter Zack Tawiah, municipal CEO for the Tano South region in Ghana, Collins Offinam Takyi, confirmed that two farmers – identified only as Abuu and Appau – did so last year, drinking a “pesticide called Aerocon”.

“Two of them drank it and they died ... they had borrowed a huge amount from money lenders,” Takyi said.

Farmers Kwabena Asante and Issahaku Ayama, interviewed by Tawiah, confirmed being on the verge of desperation. Asante said the government was neglecting the farmers while Ayama, a former winner of the regional best tomato farmer award for two years in a row, said that indeed, “frustration will force you to commit suicide by poisoning”.

There is, as said above, no indication that corruption was a factor in the bad management of the tomato canning factories or the lack of assistance to the farmers generally.

However, in Ghana, like in the other countries where the team investigated, responsible state officials refused to comment when asked questions about their duties and portfolios.

Repeated phone calls made over a period of a week to Ghana’s ministry of trade were not met with a response.

Phones were either switched off, just kept ringing or were answered with a promise that the call would be returned, which then did not happen.

Based on the finding that money often is available to provide services to citizens, and that proper management of these budgets seems crucial, the AIPC team recommends in its conclusions that a dialogue involving civil society and good governance pioneers in the state structures of the six countries, as well as donor countries and development partners, should take place on how to improve the situation.

We live in a world where facts and fiction get blurred
In times of uncertainty you need journalism you can trust. For only R75 per month, you have access to a world of in-depth analyses, investigative journalism, top opinions and a range of features. Journalism strengthens democracy. Invest in the future today.
Subscribe to News24
Related Links
Apartheid and the useless men in our lives
When aid in Africa goes horribly wrong
African oligarchs and their global networks of corruption
Next on City Press
R10 billion set aside for Covid-19 vaccine purchasing, delivery and inoculation plan

Read more on:
somaliawest africagovernancemilitaryhealth and safetyal shabaab
Podcasts
Podcast | How to select the right exchange traded funds in this crazy market