We are not out of the woods yet, say Phoenix residents 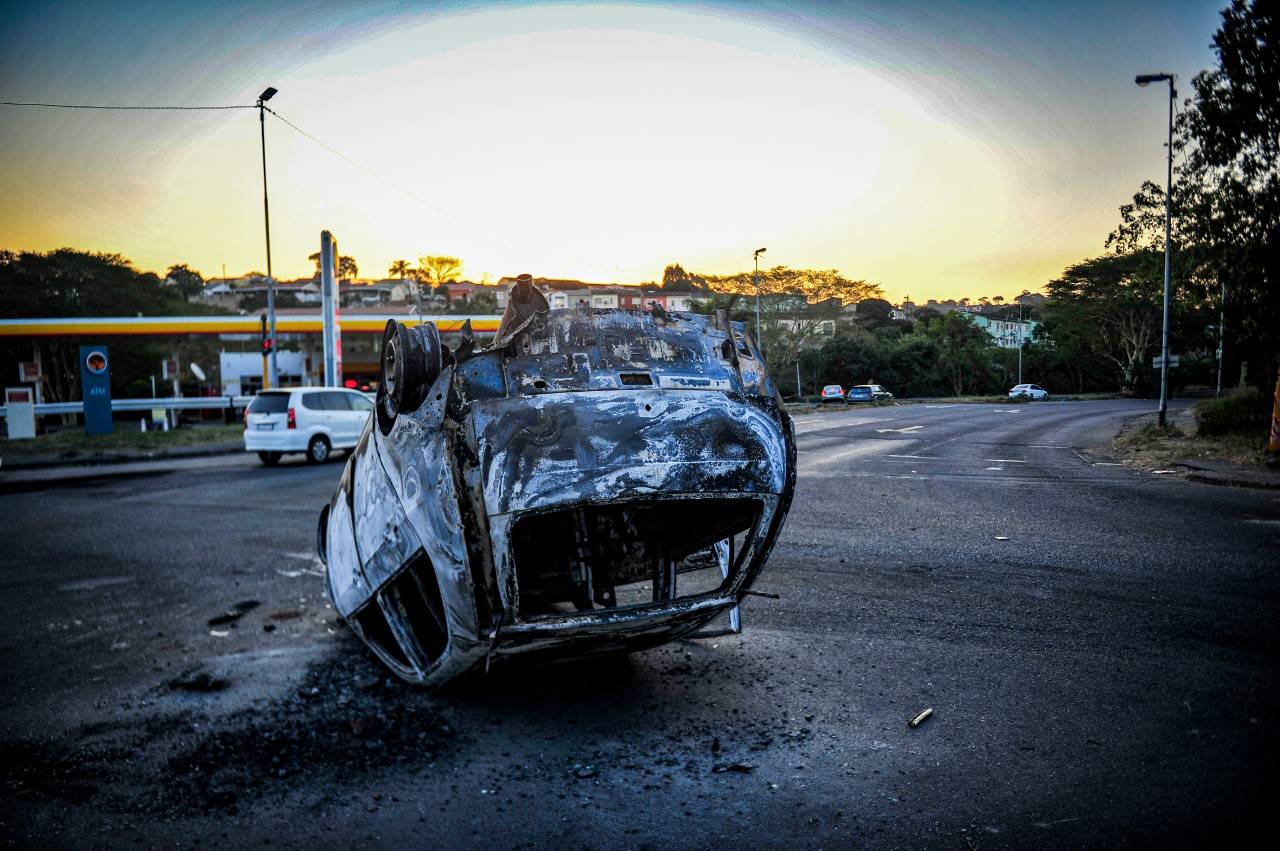 HECTIC One of over a dozen vehicles that are still on the streets of Phoenix, after having been set alight. Photo: Rosetta Msimango

Contrary to Police Minister Bheki Cele’s utterances on Thursday afternoon that calm has been restored to Shastri Park in Phoenix, located about 25km northwest of Durban Central, in KwaZulu-Natal, residents told City Press that they were still on a knife-edge.

On entering the town, we were met by at least three vehicles burnt to ashes during the violent clashes. Remnants of other torched cars, or lightly smoking tyres and tree branches, could also be seen at every turn, following racial tension sparked by public violence during the ongoing looting and destruction of property across the province. Over a dozen torched cars filled the streets’ various intersections.

“It was hectic. There is a burnt car at almost every corner of the area,” she said.

Of course it shocked us all and took us by surprise, but people felt they had to protect what was theirs; their properties and their lives.
Chantel Naicker*

While unable to share further details about her own harrowing experiences during the reported racially charged violence, another member of the community, Vinesh Naidoo* echoed her sentiment and told City Press: “People are going crazy here. People should not be coming to Phoenix. It is not safe at all.”

He further told City Press that he had “never seen anything like that”.

While admitting that petty crimes were nothing to shy away from, Naidoo said that what had transpired in Phoenix was unprecedented.

I have not seen such violence in my life. It has left me in shock. These are my people, but what happened here was just scary. Cars burning, streets literally on fire. Are we, ourselves, safe?
Vinesh Naidoo*

While things seemed calm when City Press visited the area, Naidoo said he felt that “things are far from over”.

During his visit to the torn town, in an attempt to broker a semblance of peace between two racial groups, after reports surfaced that people had died after being shot by armed residents, Cele subsequently revealed that 20 people had lost their lives. However, he warned that this number could increase as a number of individuals could not be accounted for.

Cele engaged in a closed meeting with all Phoenix leadership structures, following the violence and deaths in the area.

The SA National Defence Force has been deployed to the area to assist the SA Police Service to restore law and order.

Ministry of police spokesperson Lirandzu Themba told City Press that Cele would be visiting surrounding areas on Friday in an effort to “rebuild relationships that have been broken”.

RT @PalesaDlamini_0: Umhlanga Ridge and Prestondale Crescent residents are armed and stationed at the entrance to their neighbourhood, together with members of the SA Police Services pic.twitter.com/g89JO9cer8.#SAUnrest #CityPress

Addressing the media at the Phoenix Police Station, the minister said that the dominant element which had led to the loss of lives in the area was that of “criminality”.

A Zwelisha community member, who had been making his way back from work, said: “All I can say is that things are calm today.”

Cele added that there were at least 1 400 arrested in KwaZulu-Natal so far, and that 67 people had been killed in the province in total.

Listen to our latest podcasts.
Voting Booth
According to a letter Health Minister Joe Phaahla sent to MECs, the country is ready to get rid of masks in public as a health protocol. Is it time to go maskless?
Please select an option Oops! Something went wrong, please try again later.
About time
64% - 140 votes
No
36% - 79 votes
Previous Results