Weed will save us: Local research project looks into uses of ‘very versatile’ plant From left: Cannabisiness project manager Hennie Venter, VUT professor Fanyana Mtunzi andtechnical manager at VUT Willie Augustyn pose for a portrait inside a greenhouse where they will plant cannabis and hemp for their research. PICTURE: Cebile Ntuli

Invested parties are exploring target-specific use of cannabis to treat illnesses, clean the environment and bridge the medicines gap.

Cannabis, more specifically its hemp strain, could bring relief to communities living near mine dumps because it can store toxins, such as uranium, in its leaves.

A cannabis and hemp research and development project, a partnership between the Vaal University of Technology (VUT) and private firm Cannabisiness, will be looking into the uses of the “very versatile” plant.

The university’s subsidiary, Dihlare Remedy Institute of Traditional Medicine and Traditional Knowledge, based at its Sebokeng campus, has been working with local traditional healers to develop safe and effective medicines that were used in African communities.

READ: We have a choice to either join the emerging cannabis economy or stand by and watch

The partnership follows the department of health’s update to the Medicines and Related Substances Act, removing the stringent restrictions on cannabidiol (CBD) – one of the two main components of the cannabis plant.

Former health minister Aaron Motsoaledi deregulated CBD-containing products with a maximum dose of 20mg, deeming them safe to use for minor symptoms.

This, and last September’s Constitutional Court ruling that cannabis can be used at home, has led to the growth of not only the commercial development of CBD products, but research projects as well.

“My wife was diagnosed with rheumatoid arthritis about five years ago and none of the conventional medicines worked for her. She was extremely sick and bedridden for eight months. We went through a clinical trial, but the medication in the trial had adverse effects and she contracted tuberculosis and spent a further two weeks in hospital,” he said.

“I started getting desperate, seeing my wife in hospital and going backwards and that none of these medicines worked for her.”

Then one of his friends was paralysed in a car accident and suffered from nerve pain, for which he used cannabis.

“He asked if I had tried cannabis oil and I hadn’t, but was ready to try anything,” Venter said.

Venter and his wife tried the concoction his friend made, mixing CBD extract with an olive oil carrier. He says that within a week they were seeing “great success” and a reduction in her inflammation and pain.

But it wasn’t perfect. One batch would yield success but another wouldn’t and they didn’t understand why.

“I thought I needed to look into this so I started contacting universities and heard of Fanyana Mtunzi, who was doing traditional medicines research,” he said.

Mtunzi, a professor at VUT, shared Venter’s interest in CBD research, particularly for its medicinal use, and they acquired a permit to conduct the research from the SA Health Products Regulatory Authority, as well as collaborative assistance from the Industrial Development Corporation.

“When you look at medicines, you want a specific profile of it to treat a certain ailment. But with this plant you have more than 1 000 different chemical compounds. We’ve only identified 580 of those: 140 are cannabinoids, with 40 being successfully mapped and we want to find out what those other chemicals are,” he said.

“We cannot expect to treat ourselves effectively by ‘throwing’ or ‘carpet-bombing’ all these chemical compounds at our endocannabinoid system and hoping that the desired compound might hit the right target, while wondering if the correct dosage is administered. We need to be more accurate and target-specific in cannabinoid treatments and medicines.”

Professor Martha Pinkoane, head of health sciences at VUT and the project’s clinical manager, spearheaded Dihlare’s programme in training traditional healers to use simple biomedical procedures such as blood pressure checks to observe their patients’ health and to know when to refer them to a clinic, doctor or hospital.

“It is not easy. We have engaged and worked with 400 healers, but have only been able to get through to 120,” she said.

“They bring their medicine to us and professor Mtunzi takes them in for toxicology tests to identify what works and what doesn’t. It becomes a problem when you come back and tell them that some of their medicine is toxic and can’t be used. And because you’re a researcher and a biomedical person, you are seen as a sceptic and as trying to bring down their business,” she said.

Part of their work at Dihlare involves commercialising the products that the healers bring.

Mtunzi said so far they had seven product prototypes, ranging from a hair ointment using CBD extract and avocado oil to capsules they made from a liquid immune-boosting concoction from a traditional healer. 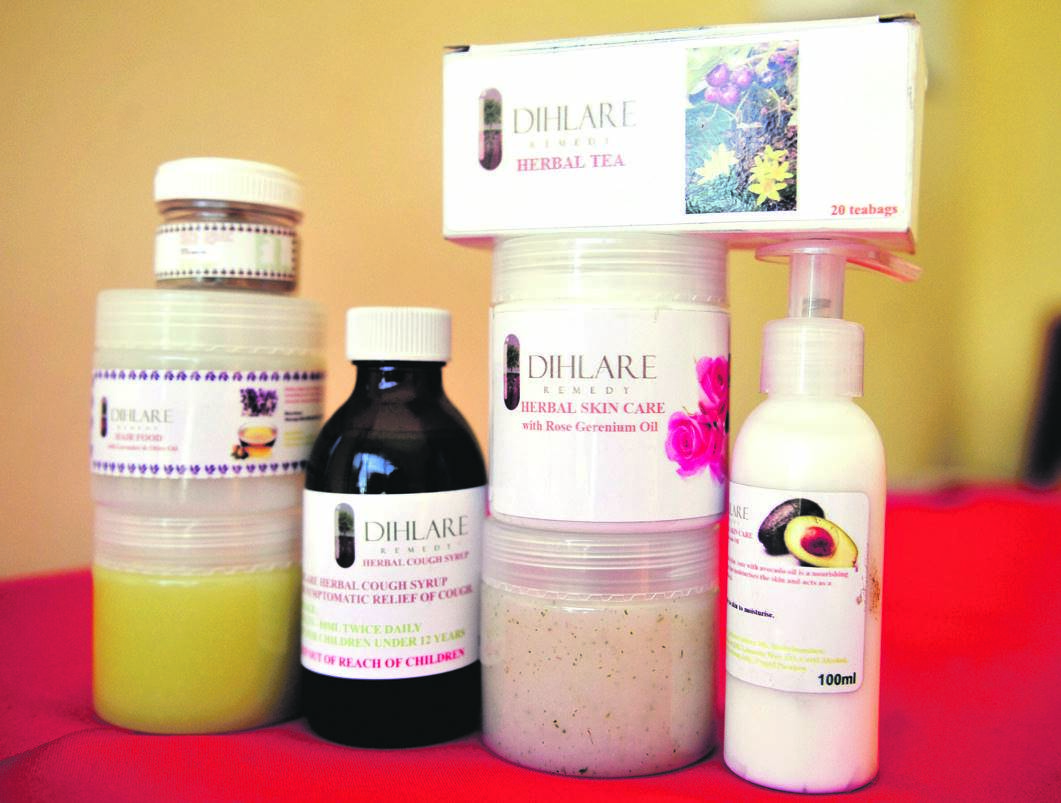 Dihlare Remedy is an Institute of Traditional knowledge and Traditional Medicine. These products are made from traditional medicine which undergo by science to makes sure the products won’t be too harsh on human skin. Picture: Cebile Ntuli

“We sign a memorandum of understanding with the healers and sign contracts on what we will do with their products and how they benefit,” he said.

“They come with the raw material and say to us: ‘We have this that we use for a headache.’ We know for headache treatment we expect plants to have certain properties and we check if it is not toxic.”

USING HEMP TO CLEAN UP THE ENVIRONMENT

Five hectares of campus property will be used to grow both cannabis and hemp from the beginning of next month.

The phytoremediation project’s technical manager Willie Augustyn, who previously worked at the Nuclear Energy Corporation of SA, said hemp would help in the remediation of uranium, a heavy metal mining by-product in many communities near old gold mines.

Research, he said, has shown that the hemp plant is a “hyperaccumulator” that can store high levels of contaminants in its leaves.

The contaminated plant could then be repurposed in the production of other materials such as car engine parts.

Venter said: “The research results are of extreme importance to the communities surrounding the ArcelorMittal Vanderbijlpark steel mill, which is one of the major industrial polluters in the Vaal Triangle.

“The aim of the research is not to blame any companies for the pollution levels in the soils, but rather to work in collaboration with these companies and government departments in creating greener remediation processes that not only clean up years of industrial pollution but restore safe living conditions to our communities,” he said.

“It will also help with much-needed employment for our local and national communities.”

We live in a world where facts and fiction get blurred
In times of uncertainty you need journalism you can trust. For 14 free days, you can have access to a world of in-depth analyses, investigative journalism, top opinions and a range of features. Journalism strengthens democracy. Invest in the future today. Thereafter you will be billed R75 per month. You can cancel anytime and if you cancel within 14 days you won't be billed.
Subscribe to News24
Related Links
SA entrepreneurs jump on the bandwagon as legal cannabis products gain traction
Dagga high on new Eastern Cape premier’s list
There's money in weed
Next on City Press
‘If I have to die for justice to prevail, so be it,’ says Senzo murder accused’s sister