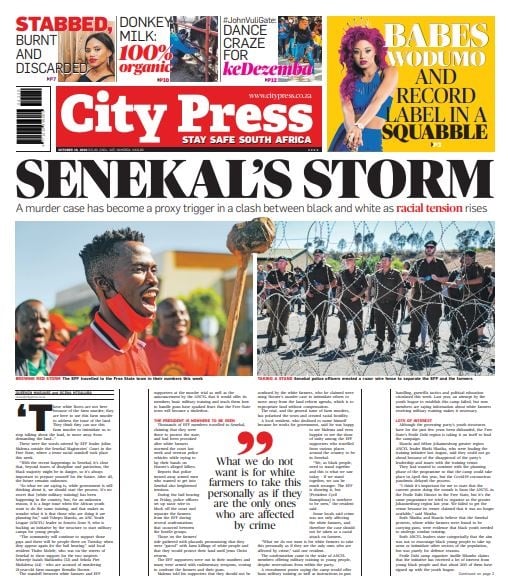 “She was the most responsible among all of us.”

This was how Phola Nkani Sakawuli, a close friend of the late Bathabile Colleen Phohlo (40), described her yesterday, following the discovery of her lifeless body at a dumpsite in Randburg, Johannesburg, last month.

President Cyril Rampahosa wants to privatise some of the country’s most lucrative commuter train routes to improve access for nearly a million people.

During his speech in Parliament on the economic recovery plan on Thursday, Ramaphosa said government would “advance greater participation in the rail industry by giving third parties access to the network and renewing sidings”.

Those who think they are nothing but slog animals should think again, says a farmer who’s selling their milk and singing their praises

Appreciated by the queer community

The ANC Youth League’s controversial attempt to offer military training has caused an uproar again, but this time the organisers are determined to go ahead with the programme. A poster used to recruit young people says the camp will offer basic military training, as well as instruction in gun-handling, guerrilla tactics and political education, among others.

Another investigation into fruitless expenditure

An explosive confidential section 106 investigation report into allegations of impropriety concerning supply chain management processes in the appointment of service providers at the Sol Plaatje Municipality in the Northern Cape has revealed how the municipality wasted millions of rands on an Audi Q7 and deviation contracts.

While the world has been experiencing climate disasters such as earthquakes, tsunamis and, more recently, Covid-19 over the past 20 years, wealthy nations have done little to tackle the harmful emissions that cause climate threats.

The termination of DA Gauteng member of the provincial legislature Nkele Molapo’s party membership and how the party handled her sexual harassment claim against a provincial leader have left some DA members unhappy.

ANC to have final say on Masuku

Former Gauteng health MEC Bandile Masuku will know this weekend whether the ANC’s provincial executive committee (PEC) endorses his removal from his post.

The art of Covid

Moriarty promises to grow the DA

DA Gauteng provincial chairperson Mike Moriarty says that, while the party’s federal chairperson, Helen Zille, is capable of doing the job, he has more to offer.

The Kagiso Shanduka Trust was awarded an irregular tender in the Free State for rural education development and related infrastructure project that should have gone out for competitive bidding, leaving the provincial education department R500 million in the red.

A contractor allegedly manhandled and threatened an official who refused to pay for a miniature substation that was not supplied in one Mpumalanga municipality, while, in another, a polygamous councillor employed his two wives.

After the record company failed to meet their demands, the beat producers have now approached a Durban lawyer to launch a lawsuit

What’s in store for Miss SA this year?

Reigning Miss Universe Zozibini Tunzi is returning to South Africa to act as a judge at this year’s Miss SA competition next week.

We live in a world where facts and fiction get blurred
In times of uncertainty you need journalism you can trust. For only R75 per month, you have access to a world of in-depth analyses, investigative journalism, top opinions and a range of features. Journalism strengthens democracy. Invest in the future today.
Subscribe to News24
Related Links
Senekal in the eye of a storm as farmer's murder sparks racial tensions
Axed health MEC Bandile Masuku fights on
Gauteng premier Makhura ‘discharges’ health MEC Bandile Masuku over PPE corruption
Next on City Press
Concerns as Doctors Without Borders pulls out of North West Choose a newsletter
Voting Booth
Thousands of Gauteng motorists who refuse to pay their e-tolls could be fined R500 every time they drive under a toll gantry from July next year. In addition, they will have to pay a R100 levy for every one of these fines.
Please select an option Oops! Something went wrong, please try again later.
e-tolls must be scrapped
77% - 150 votes
I still won’t comply
15% - 30 votes
I’ll do my duty and avoid fines
3% - 5 votes
Good idea to help the economy
5% - 9 votes
Previous Results
Dumisane Lubisi
Tributes from friends and colleagues of Dumisane Lubisi