When Christopher Reid started having strange dreams in 1992, he never imagined that they were a sign of his calling to be a sangoma.

Being a white man born and raised in opulence and privilege in colonial Rhodesia (now Zimbabwe), the dreams of drums that filled his head always left him emotional and confused.

“I started dreaming of this dark place with only candlelight, a black man and woman putting white beads on me, with my whole body covered in blood,” says Reid.

Now an experienced sangoma commonly known by his spiritual name Ntombemhlophe, he lives in a four-rondavel homestead down the high hills of Gwenxintaba in Lusikisiki.

It is not unusual to see him skillfully balancing a bundle of wood on his head as he strolls through the yard to the other end of the homestead with ease, like one of the village women.

Reid moved to Cape Town during the Rhodesian war to further his studies and later moved to Port St Johns when his mother fell ill with cancer. 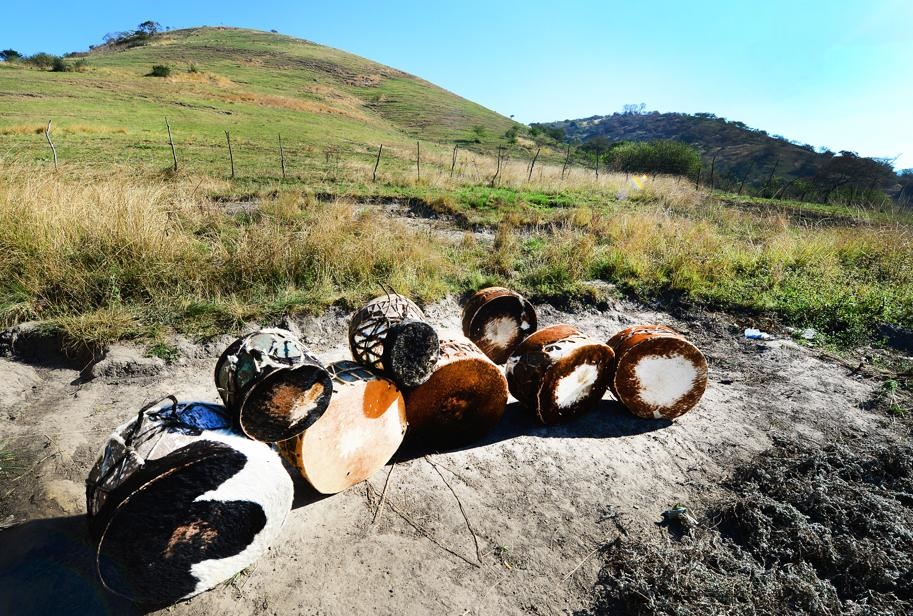 Drums on the sun ahead of the sangoma initiation ceremony. Photo: Leon Sadiki Nyamekeli ithongo Nhlabatsi and his spiritual sister Nonhle Khumalo who went through the process of becoming a sangoma before him. Photo: Leon Sadiki A candle light shines on Ntombemhlophe's face as he sits inside one of the rondavels known as “emakhosini”. Photo: Leon Sadiki 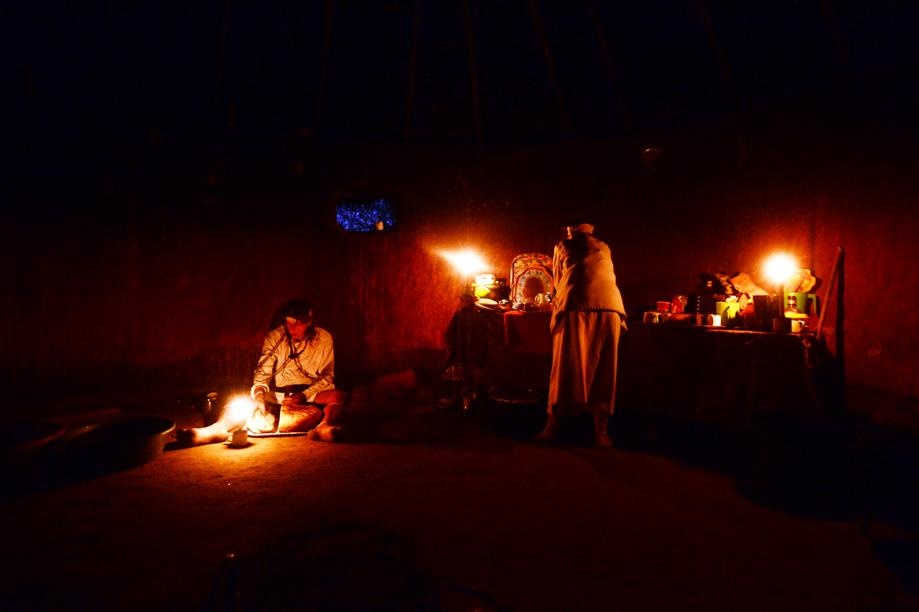 Candles and incense on the floor. Picture: Leon Sadiki

Nyamekela is Ntombemhlophe’s spiritual son and he speaks fondly of his guide.

“I was shown utata Mhlophe in a dream and that he was meant to be my mentor, teacher and spiritual father,” says Nyamekela.

A photographer by profession, Nyamekela is now a sangoma.

He has travelled from Zola, Soweto, to the village to celebrate ukungqwamba of one of the sangoma initiates in the homestead.

It is a celebration that symbolises that the initiate is a step closer to being a sangoma.

In total, 29 initiates have been trained to be sangomas under the mentorship of Ntombemhlophe.

The ceremony takes place at night, and song and dance predominate.

But most important is that it is on this night that initiates change their white garments for the red.

This symbolises that they are halfway through their training to become a sangoma.

Villagers attending from near and far are kept awake by umqombothi, food and the sounds of stomping feet as the sangomas dance to connect with the ancestors.

Among residents, Mhlophe is known for his love for the community and his spiritual gift that he shares with those around him.

Mbuyiseni Mguntu (33) is one the sangomas from the community who never miss a ceremony at the homestead.

He started on his path when he became mentally ill in high school and his mother took him to a traditional healer who advised her that he needed to become a sangoma in order to be healed.

“I now help people in my community with this gift from the ancestors,” says Mguntu.

We live in a world where facts and fiction get blurred
In times of uncertainty you need journalism you can trust. For only R75 per month, you have access to a world of in-depth analyses, investigative journalism, top opinions and a range of features. Journalism strengthens democracy. Invest in the future today.
Subscribe to News24
Related Links
For R5 000, sangoma will pray for an informal miner's safety
US nurse comes to SA to graduate as sangoma
There is no such thing as a modern sangoma
Next on City Press
Mogoeng Mogoeng ordered to apologise for comments about Israeli-Palestinian conflict

Read more on:
traditional healersangoma
Podcasts
Podcast | How to select the right exchange traded funds in this crazy market

Choose a newsletter
Voting Booth
Covid-19 variant, 501Y.V2, has attracted much negative coverage, but as researchers learn more about the variant they are discovering that positives can also be gleaned like the fact that those infected by the variant are showing signs of immunity against re-infection.
Please select an option Oops! Something went wrong, please try again later.
Hoping we learn more soon
29% - 2 votes
We need more scientists
0% - 0 votes
Knowledge is power
57% - 4 votes
Not interested
14% - 1 votes
Previous Results
The best of 2020
forsubscribers
Can you guess who featured in our most popular articles from 2020?