When victim and attacker have to wait side by side 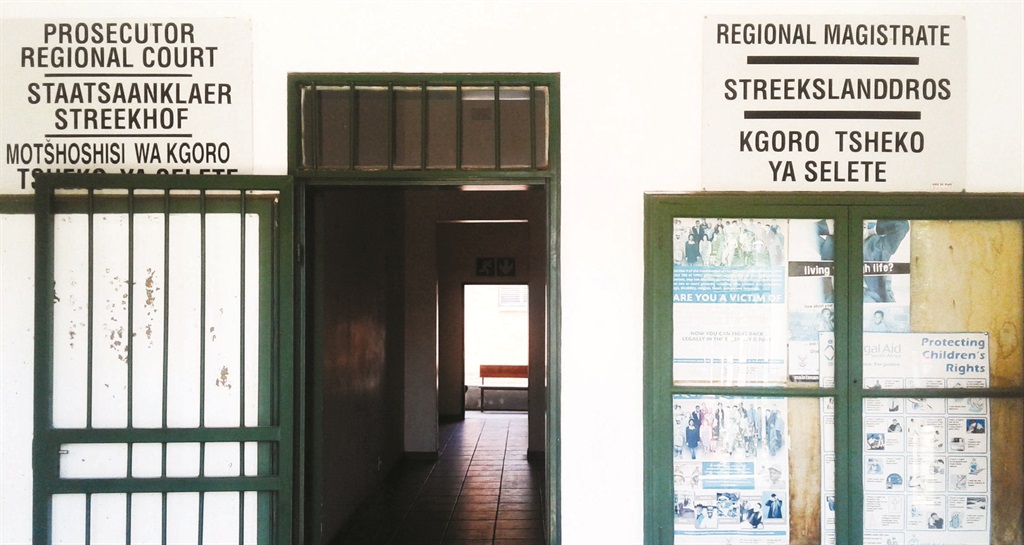 Outside the regional court in Groblersdal, complainants may run into alleged perpetrators during adjournments Picture: LUCAS LEDWABA

The magistrate adjourns the case after a lengthy cross-examination of a woman accusing her male neighbour of attacking her in her RDP house. After the court has risen, both rape accused and complainant leave through the same side door to wait on the row of benches lined up outside on the veranda.

It’s an awkward sight: the complainant tensely opening the wooden door leading outside while the accused, who was subsequently found guilty of rape, waits nervously behind her. She fumbles with the door handle, apparently nervous at the presence of the man behind her.

Such is the daily reality at the Groblersdal Magistrates’ Court in Limpopo, whose regional court is one of the country’s hybrid sexual offences courts.

“The court in this instance may be lacking one or a few features. For example, it might not have separate waiting areas for adults and children but have one waiting area for both due to special limitations, or there may be one prosecutor instead of two. Or an intermediary may not be available on site but may be available from another court or region on a needs basis,” he says.

The Groblersdal court doesn’t have a waiting room.

“We don’t have. They just sit there outside. It doesn’t make the job any easier,” says regional court prosecutor Mulalo Christopher Mapome.

It is even more of a challenge when child victims are involved, he says.

But, on the positive side, the court does meet a number of the requirements, including closed-circuit television and sound facilities. The room next door to the court room has similar facilities as well as toys child witnesses can use during testimony.

When the room isn’t in use for witnesses, other staff do their administrative work there.

Mapome says the upgrading of the facilities has made operations smoother, both for victims and staff.

“It has made our job easier. It’s easier for us to communicate when cross-examining [and] leading evidence with witnesses. It’s proper,” he says.

Mapome says the court handles cases from eight police stations, which cover vast areas including densely populated settlements such as Dennilton and Tafelkop. The court deals with between seven and 12 sexual offences cases daily – most of which, Mapome says, involve children. Adding to the workload is the fact that the regional court also hears other criminal cases.

While the addition of specialised equipment has made their work easier, there are still challenges. There is a lack of specialist interpreters and there is no clerk to deal specifically with sexual offences cases. The court does, however, have a social worker.

Of having no dedicated clerk, Mapome says: “We need to type reports [and this leads to] overloading of court clerks. Cases take longer to be finalised,” he says.

The court now has a backlog of 165 cases, mainly related to sexual offences. This is because cases had to be temporarily withdrawn because the court previously didn’t have adequate equipment, such as CCTV, to hear some of them, but these have been reinstated.

“The roll is moving now. But if we had a separate building only for the sexual offences cases then it would make our job even easier,” says Mapome.

Have you used the services of a sexual offences court? Tell us about your experience.

SMS us on 35697 using the keyword COURTS and tell us what you think. Please include your province. SMSes cost R1.50. By participating, you agree to receive occasional marketing material

We live in a world where facts and fiction get blurred
In times of uncertainty you need journalism you can trust. For only R75 per month, you have access to a world of in-depth analyses, investigative journalism, top opinions and a range of features. Journalism strengthens democracy. Invest in the future today.
Subscribe to News24
Related Links
'Sometimes we cry too' – sexual offences court officials
SA’s first sex offences court
‘I felt depleted leaving the court’ – sexual offence victim
Next on City Press
Government ‘wins first round’ in SA-Israeli Miss Universe fallout