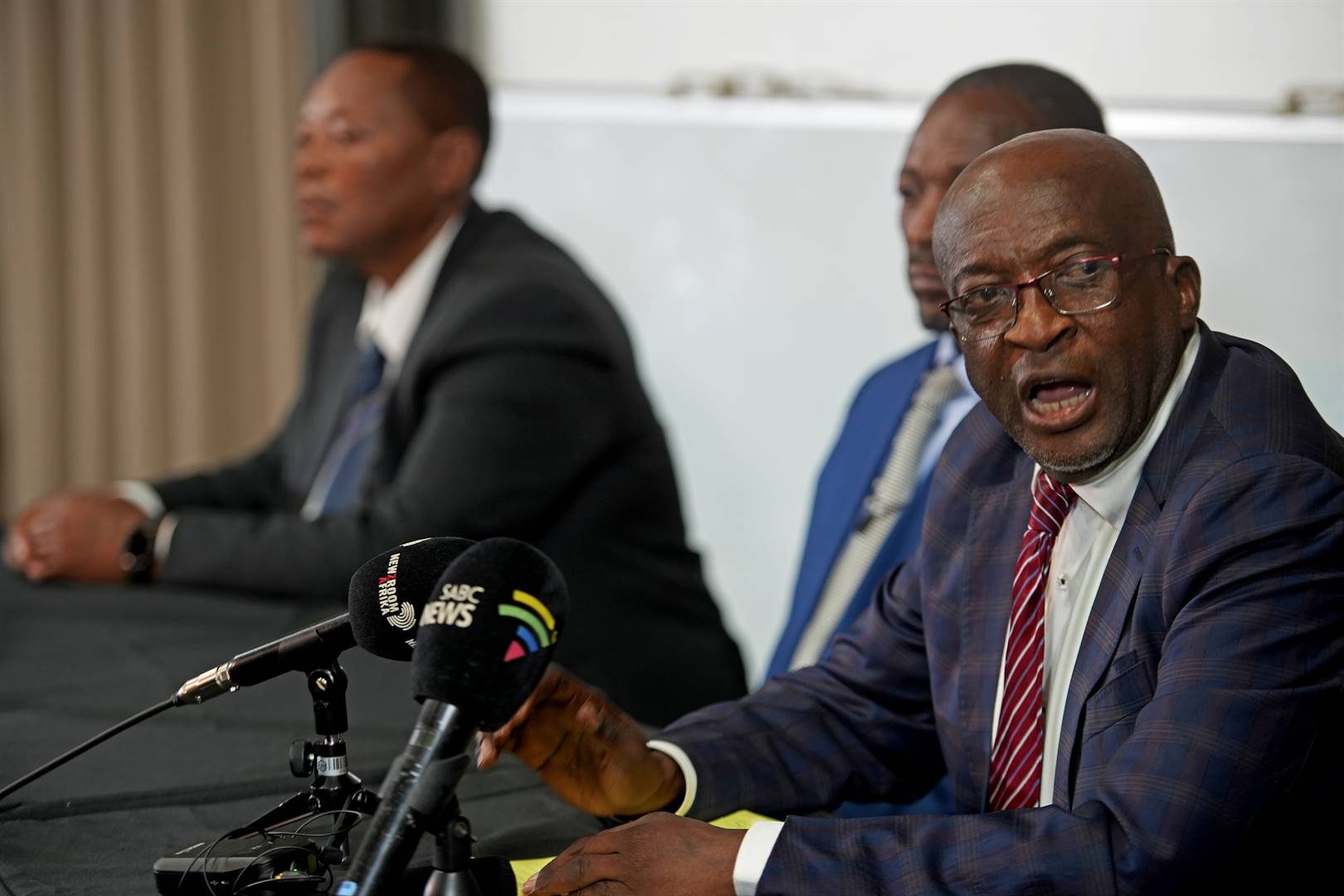 Zulu Princes (from left) Mbonisi, Vulindlela and Mathobisizwe – who are the brothers to the late King Zwelithini KaBhekuzulu – addressing the media at a press briefing where they voiced their disassociation with the upcoming coronation of King MisuZulu. Photo: Tebogo Letsie/City Press

The brothers of the deceased Zulu king, Goodwill Zwelithini, have distanced themselves from the upcoming coronation of the current king MisuZulu kaZwelithini, saying that the royal house wants Prince Buzabazi kaZwelithini to ascend the throne.

The brothers claim the process followed to ordain MisuZulu was irregular and did not receive the blessing from the royal house.

In a press briefing at the Indaba Hotel in Johannesburg on Thursday, Prince Mbonisi kaBhekuzulu, Vulindlela kaBhekuzulu and Mathubesizwe kaBhekuzulu proclaimed that the coronation process was a violation of the customary rituals, which required them to be the ones taking him to the kraal.

Brothers of the late Zulu King Goodwill Zwelithini have distanced themselves from the upcoming coronation of current king MisuZulu pic.twitter.com/LgHDpZ5o7l

The trio said the hallowed process could only be conducted by the remaining brothers of the late king and they condemned the coronation as it is against Zulu customs.

“The people who have organised the coronation and are behind the current king are unknown to the royal house. The late king did everything with us and told us how he wanted things in the royal house to be done. We have been quiet for too long and these people are leading the Zulu nation astray,” said Mathubesizwe.

They further implied that the current king was not preferred by the deceased king because of some “misdemeanours” and their choice was Zwelithini’s right-hand man (Buzabazi), who did everything for him, including resolving family conflicts.

We also saw all of his children while growing up, and we can tell you that he (Buzabazi) loves his family more than anything else… We know people who are a negative influence on our children but deep down, they know that we are the only ones who have the right to cover royal proceedings.

Mathubesizwe admitted that the conflict over the throne was causing a lot of division in the royal family, but this was perpetuated by certain family members who have their own agendas.

“...It’s a mess now because the kids are divided. It’s a pity that we are only coming out now, so that gave them a chance to do as they wanted in the royal family.”

Vulindlela further revealed that they were waiting on the National Prosecuting Authority to decide pertaining to a criminal case opened to investigate the tampering with the late king’s signature on his will.

The announcement of the coronation was made through Prince Mangosuthu Buthelezi as the traditional prime minister of the monarch.

The entering of the kraal (ukungena esibayeni in Zulu) ceremony is performed in line with a Zulu custom for the king to fulfil the necessary rituals in celebration of his installation as the leader of the Zulu nation.

The ceremony is scheduled for Saturday at KwaKhangelamankengane Royal Palace.