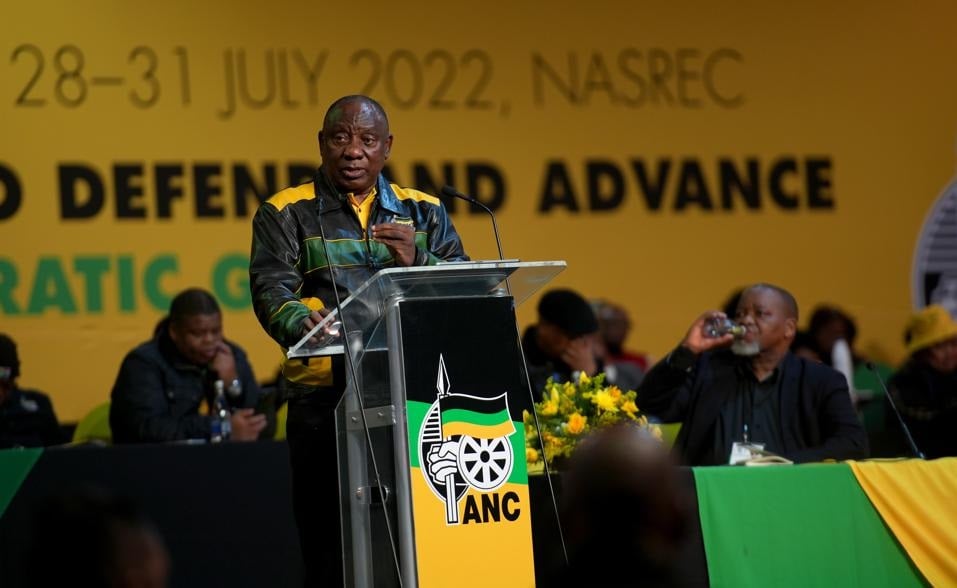 ANC president Cyril Ramaphosa hopes the party’s policy conference currently under way in Nasrec, South of Johannesburg, will end with ideas and solutions to the challenges facing the country and strengthen what he says is a weakened ANC.

In a two-hour-long opening address at the policy conference on Friday, Ramaphosa talked about the challenges the country was facing, including unemployment, crime and gender-based violence, and urged the delegates to use the conference to ask themselves what could be done to solve these challenges. He also addressed the division in the party that led to its weakness. “The ANC is today at its weakest and most vulnerable since the advent of democracy,” he told the delegates.

Ramaphosa said the weakness of the party was clear in how it performed in the local government elections, where the ANC, in some municipalities, failed to get the outright majority to lead. He said it was also evident in how people had lost trust and are increasingly frustrated with the party and government.

Our weaknesses are reflected in many of our branches, which are not involved in the lives of their communities but are activated only for the purpose of electing delegates for conferences or nominating candidates for public office.

“Perhaps most strikingly, our weaknesses are evident in the divisions within our ranks.”

Ramaphosa said this to a half-empty hall, a momentous contrast to the usually fully packed elective conferences of the party.

He also spoke about the divisions in the ANC, which were not because of ideologies or policies, but rather by the competition for positions to have access to public resources. He said the divisions did not only affect the party but also weakened public institutions, which affected service delivery.

“These divisions manifest themselves in patronage, gatekeeping, vote buying and manipulation of organisational processes. These divisions are driven by corruption and the need by those responsible for corruption to avoid detection and accountability.”

Ramaphosa highlighted the issue of division as some of the provinces attending the conference, including KwaZulu-Natal, have already made it known that they would use the policy conference to call for an end to the step-aside resolution of the 2017 Nasrec elective conference.

However, the president said the party would not turn its back on the resolutions it implemented five years ago, especially those dealing with corruption.

“On this, there can be no going back. There can be no compromise. We cannot abandon our principled position on corruption in pursuit of false unity.”

Ramaphosa said the renewal of the ANC depended on ending corruption.

“Our movement must be united around our values and mission. It must be against corruption, patronage and factionalism.

Meanwhile, Cosatu president Zingiswa Losi – while giving a message of support – emphasised that the policy conference needed to discuss the renewal of the party and reaffirm its core values. She also said Cosatu wanted a “pro-working class” ANC that does not shy away from defending the rights of workers and is committed to eliminating the legacy of apartheid and colonialism.

“We want a committed, honest and an ANC with integrity and humility, which is critical in building an effective organisation and government. Our hope chair, for this policy conference, is that it should represent a turning point in the renewal of the ANC and in tackling and reversing the negative tendencies that have eroded the political integrity and moral standing of the party amongst our people.

“This meeting should reaffirm the core values and principles of the ANC, that of unity, selflessness, sacrifice, collective leadership, humility, honesty, discipline, hard work, internal debates, constructive criticism and self-criticism. We need, as a federation, to see a renewed and rejuvenated ANC emerge.”

Newly elected general secretary of the South African Communist Party (SACP) Solly Mapaila told the delegates that the policy conference – among others – needed to seriously discuss the issues of land and the recent framework announced by Ramaphosa to rescue the energy crisis at Eskom.

Mapaila said the SACP was “not completely happy” with the framework, as it places the responsibility on the private sector, which does not account for the people of South Africa.

“When the people have no electricity, they don’t call corporations, they call the government. So, we need to take full responsibility recapitalise Eskom in a manner that we can discuss with society so that we are accountable for the actions that we’ve taken ourselves. We still believe that these are issues that will further require engagement at this policy conference within the framework of the alliance.”

Mapaila added that the ANC needed to deal with the land question and said that any revolutionary knows that the ownership of land determines whether a society is rich or poor.

“We can’t be dilly-dallying on the matter of this nature, on the land question, in the midst of poverty. We need, therefore, this policy conference to come out much clearer [on the question of the land].”

Unlike other lively ANC conferences, the first day of the policy conference was lukewarm with minimal singing from the delegates. The only time the conference came alive was when Ramaphosa called for more youth in leadership.