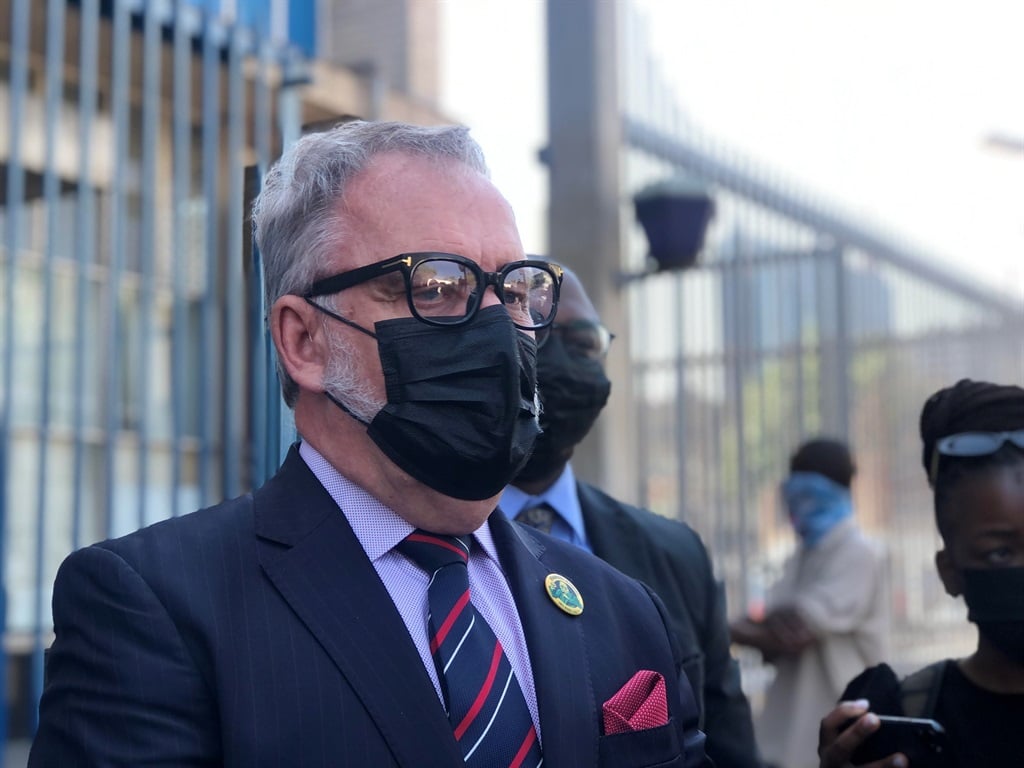 Carl Niehaus claims he was laying the charges on behalf of staff who were afraid of being victimised and harassed. Photo: Juniour Khumalo/News24

Former Umkhonto weSizwe spokesperson Carl Niehaus has stepped up his war with the party’s top brass by laying charges against the ANC and national office bearers at the Johannesburg Central Police Station on Wednesday.

The charges include fraud, theft, corruption and other statutory crimes in relation to the nonpayment of staff salaries and benefits, which include UIF, medical aid and provident funds.

He was accompanied by Rudolph Baloyi from Eric Mabuza Attorneys.

[WATCH] Former MKMVA spokesperson Carl Niehaus arrives at the Johannesburg Central Police Station. Despite having been dismissed last week, he is going ahead with laying charges against ANC officials for non-payment of salaries. @City_Press pic.twitter.com/JvVifzsvzQ

Niehaus was summarily dismissed from his position in the office of the secretary-general last week, but claims he was laying the charges on behalf of staff who were afraid of being victimised and harassed.

ANC staff representative Mvusi Mdala told City Press that they had nothing to do with the charges: “We are not a part of this, he [Niehaus] is alone.”

Niehaus’ impromptu briefing outside the police station saw him plead his dedication to fighting for worker’s rights.

[WATCH] Niehaus: “It is clear to us that there was an intention from the management of our employer to use the action against me as an intimidation against other staff members.” pic.twitter.com/P9FrQNjBEq

He brought along his friend, Luthuli House staffer McDonald Mathabe, who read out a statement, purportedly on behalf of ANC employees. After claiming that the matter was purely a labour issue, Mathabe backed Niehaus against his dismissal.

“We are not here to play politics. This is a labour matter, not a factional political issue. It is outrageous that the senior management of the ANC saw it fit to summarily dismiss comrade Niehaus for simply having issued a statement saying that he was going to lay charges about apparent criminal acts that have come to our attention,” he said.

“A caring employer would not have done what they had done; they could have called Carl. They could have said: ‘Comrade Carl, can you come to the office, can you come and explain to us what is this all about?’ You do not send a letter to a fellow colleague at 2.30pm and then say that, by 4pm, you should tell us why we should keep you as an employee.”

He added: “Carl managed to meet the deadline and submitted a response and, despite that, he was dismissed. Who did comrade Febe Potgieter consult with? Were there labour processes followed?”

What’s next for Niehaus

Niehaus appears intent on ensuring that he is not ignored by party leadership.

His ability to mobilise members to work against the party’s leadership is not a joke, although some view him as the Luthuli House clown.

His friendships and comradery with former party leader Jacob Zuma and suspended secretary-general Ace Magashule have endeared him to many disgruntled ANC members.

Niehaus has been at the forefront of what has come to be known as the radical economic transformation (RET) faction within the ANC, a cult-like following that supports Zuma and Magashule.

READ: RET lobbyists in the ANC threaten Ramaphosa with jail

With the wings of the RET group now largely clipped, Niehaus seems disinclined go down without a fight.

He intends to appeal his dismissal, and then he plans to participate in a meeting of ANC members at the Ipelegeng Thusong Service Centre in Soweto to discuss organisational issues.

“This is simply and singly a staff matter. I have been summarily fired from my position in the African National Congress. Let me clarify that it does not mean I have been expelled from the ANC. I am sure that [the appeal] will be successful because, as comrade McDonald indicated, every single piece of labour legislation has been violated in the way I was fired,” Niehaus said.