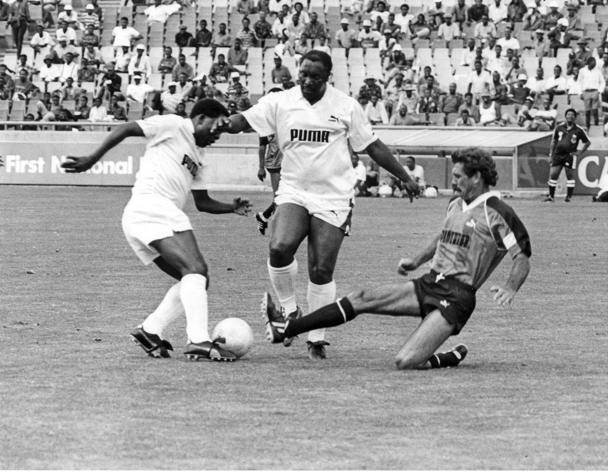 When I joined City Press as a senior sports writer in 1998, the same year Sepp Blatter took over from João Havelange as Fifa president, there was excitement in Mzansi about everything football.

This happened against the backdrop of the triumph of Soweto giants Orlando Pirates in the 1995 CAF Champions League final against Côte d’Ivoire giants Asec Mimosa through that historic Jerry “Legs of Thunder” Sikhosana breakaway goal.

A year later, Bafana Bafana were to add another footballing milestone in the country’s short history since readmission into the Fifa family in 1992.

Those two late second-half goals by Mark Williams against Tunisia at the traditional home of football, now known as FNB Stadium, will remain etched in the history of this country’s football folklore. Mzansi, despite being a newcomer, had arrived in a big way.

READ: Ex-Bafana captain Neil Tovey: 'Madiba was in contact with me throughout AFCON 1996'

With Blatter now at the helm of Fifa, South Africa’s intention to host the World Cup had also started to gather momentum.

The campaign was ably aided by the new boys on the block, Bafana Bafana, who had qualified for their maiden World Cup.

Who can forget the late Phil “Chippa” Masinga’s thunderbolt that sunk Congo Brazzaville at a sun-drenched FNB Stadium to send Mzansi to France in 1998. Things might not have gone according to plan in France, but the social bond Bafana Bafana had created with the fans was now unbreakable and growing from strength to strength.

Between 1998 and 2000, the campaign for South Africa to host Africa’s maiden World Cup had reached a crescendo and it seemed like only a miracle was going to deny the country the right to host the 2006 fiesta.

But when New Zealander Charles Dempsey abstained from voting on July 6 2000 at the Fifa headquarters in Zurich in Switzerland, giving Germany a 12-11 narrow victory and the right to host to the 2006 World Cup, the national heartbreak was almost palpable.

Unperturbed by this setback, the triumvirate of now Safa president Danny Jordaan, Molefi Oliphant and Irvin Khoza was asked by the country’s football family to give it another go and bid for the 2010 World Cup.

The rest, as football journalists love to say, is now history.

It is within this period that City Press established itself as the dominant force and a source of reference for every piece of football history in the country.

Apart from profiling the game’s core stakeholders, including players, clubs, national teams, the politics of the game, its failures and success, among other things, this newspaper took the coverage of local football to the next stage.

Between 1998 and 2004, when South Africa won the right to host the 2010 spectacle, City Press had become the undisputed bible of South Africa’s football-related news.

Both Vusi Mona, who was the editor during the early 2000s, and Mathatha Tsedu, who took over from him, religiously devoted acres of space in the newspaper to the coverage of sport – or, I should say, football.

So dominant and thorough was City Press’ coverage of football that Jomo Sono and Aubrey Tau (now owner and CEO of MojaLove TV) christened the publication Mzansi’s bible of soccer, a name that has stuck with the title to this day.

Having introduced a standalone sports section, City Press became the unrivalled football publication, and between 1998 and 2006, the newspaper won almost every football award on offer.

In fact in 2001 and 2002, the publication won every award on offer in the sponsorship, provincial and national awards categories.

Chimhavi is a former City Press sports editor, News24 bureau chief and Safa spokesperson, and is now head of stakeholders at Safa

We live in a world where facts and fiction get blurred
In times of uncertainty you need journalism you can trust. For 14 free days, you can have access to a world of in-depth analyses, investigative journalism, top opinions and a range of features. Journalism strengthens democracy. Invest in the future today. Thereafter you will be billed R75 per month. You can cancel anytime and if you cancel within 14 days you won't be billed.
Subscribe to News24
Next on City Press
Fred Khumalo: Reporting from the frontline was a blast