South Africa is home to some spectacularly wealthy people, as highlighted in this edition of City Press.

Understandably, given the high levels of poverty and the backlog in basic services, policymakers, academics and the general public have tended to focus on poverty and the poor. But the rich should also interest us. Where do they get their money from and what do they spend it on?

However, a focus on the wealthy as anomalies – as objects of curiosity – obscures the important fact that they are anything but anomalous. In fact, they are products of an economic and social system that continues to produce and reproduce staggering inequalities.

The result of this system is the wealth we see in these pages. The magnitude of these riches should force us to ask deeper questions about wealth in our society. How has our history of dispossession and apartheid affected the accumulation and distribution of wealth in South Africa?

Why, but for a few exceptions, has this pattern of accumulation and distribution persisted in post-apartheid South Africa? How is it possible that we can have a society with so much wealth and so much poverty? Why does the economy continue to reproduce so much inequality?

The first and most important point to make about understanding inequality in South Africa is that it has deep historic roots in our colonial and apartheid past – it is not something that has only recently happened. These historical roots go back several centuries, as detailed in Stellenbosch University Professor Sampie Terreblanche’s History of Inequality in South Africa 1652-2002.

In its extensive review of inequality trends in South Africa, the Southern Africa Labour and Development Research Unit found that overall inequality decreased only slightly between 1993 and 2014, from 0.681 to 0.655, despite a temporary increase accompanying the global financial crisis that began in 2008, when inequality rose to 0.69. The main reason it did not increase over the entire period is because of social grants and other similar programmes.

What are the factors that drive the reproduction of inequality?

The labour market remains at the core of the country’s socioeconomic challenges, and is also at the core of the inequality issue. In 1994, the narrow unemployment rate, which excludes workers who have given up any prospect of finding a job and have stopped searching for work, was 20%, rising to 26.7% in 2000 and falling to 22.5% in 2007, according to International Labour Organisation figures. 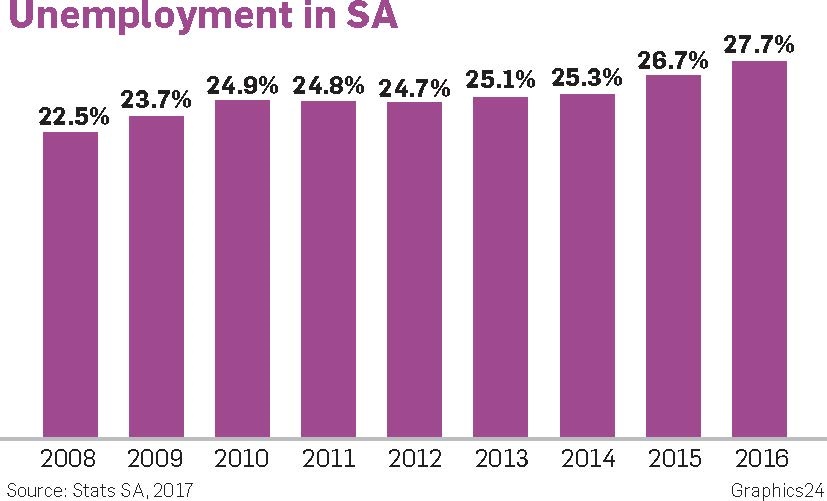 By last year, however, the unemployment rate had risen to 27.7%, the highest level so far in this decade, according to figures from Stats SA. Other studies have shown current political uncertainty and poor economic growth are predicted to drive the narrow unemployment rate towards 30% in the next few years.

The South African labour market can be characterised as divided into two, where the high-skilled segment is dominated by excess demand for workers, skills shortages and very high wages, while the low-skilled tier is characterised by excess supply of labour, unemployment and very low wages.

All of this matters for inequality.

As we have said, South Africa has some of the highest income inequality in the world. In 2015, the top 10% of full-time employees took home, on average, 82 times more than the bottom 10%, and research shows that white workers, on average, earn three times more than black workers.

On aggregate, a 2014 study found that, across the JSE, the ratio of the average salary of a company’s chief executive to the average wage is 73:1. In 2016, PwC calculated a pay ratio for a sample of South African firms between 13 and 66, and this was 13 to 62 last year.

Researchers investigating poverty and inequality in South Africa have for many years had access to excellent poverty data, and data on income inequality. However, there has been very little written about the extent and dynamics of wealth inequality, a field of study that has attracted increasing attention since the seminal contribution on wealth inequality by Thomas Piketty in 2013.

A 2016 paper by Anna Orthofer from Stellenbosch University is the first significant investigation into wealth inequality in the country. She used previously unpublished personal income tax data from the SA Revenue Service for the 2010/11 tax year and the striking results underscore the importance of including an analysis of the distribution of wealth in any study of inequality.

Not only are these findings striking, they also show us how the pattern of economic growth in post-apartheid South Africa has worsened wealth inequality.

We should all be concerned that the country is making little progress in addressing income and wealth inequality, and that the little bits of data we have suggest wealth inequality is now worse than it was during the height of apartheid. In 1970, the richest 20% of the population owned 75% of all wealth.

In the face of the persistence of inequality in South Africa, what can we do?

Of course, employment creation and increasing economic opportunities for those on the margins of the economy must be a key part of the solution. However, we believe that there has been insufficient attention paid to the structures of economic, political and social power that continue to produce and reproduce poverty, and particularly inequality, in South Africa.

We argue that an intersectional approach – an approach that seeks to identify interlocking systems of power including race, gender, class, culture, employment, age and sexuality – is necessary to understand the way in which these different dimensions of power interact to reproduce inequality.

To do this, researchers from the Southern Centre for Inequality Studies at Wits and our partner institutions are examining how inequality is produced and reproduced across spaces and classes through the education and healthcare systems, and in the labour market.

While power underpins all social relations, it is often taken for granted or completely overlooked as it is often hidden behind other social relations. It is our view that addressing poverty and inequality requires us to think beyond technocratic policy solutions, and to look much deeper at power.

Changing power relations to generate coalitions that will support policies that improve equality outcomes are needed, both inside and outside the state, if we are to overcome our legacy of poverty and inequality.

What steps should be taken to reduce poverty and increase equality in SA?

SMS us on 35697 using the keyword INEQUALITY and tell us what you think. Please include your name and province. SMSes cost

We live in a world where facts and fiction get blurred
In times of uncertainty you need journalism you can trust. For only R75 per month, you have access to a world of in-depth analyses, investigative journalism, top opinions and a range of features. Journalism strengthens democracy. Invest in the future today.
Subscribe to News24
Related Links
How parastatal honchos stack up in wage stakes
How much does your boss earn? Do you really want to know?
What goes on behind the high walls?
Next on City Press
The top 20: Everything you need to know. In numbers