Arrows stop Downs in their tracks 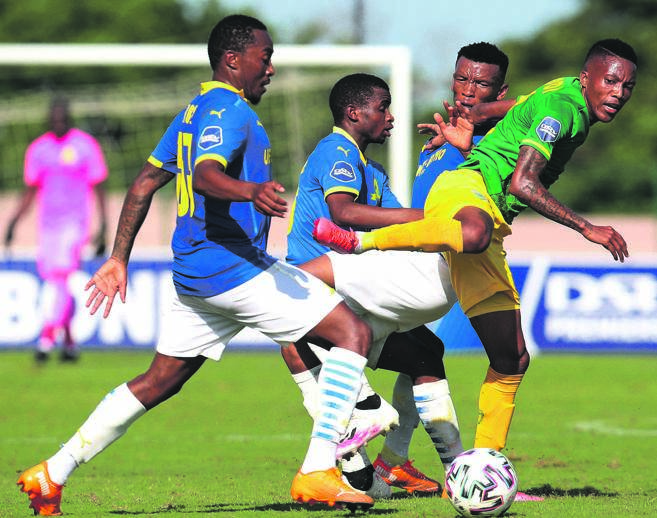 Mamelodi Sundowns might just hang in there to end the year atop the DStv Premiership standings, but their draw against Golden Arrows yesterday offered trailers Swallows FC the chance to equal points at the summit.

Sundowns rounded off what has been a difficult week in their camp following the passing of their defender Motjeka Madisha, who tragically died in a car accident on Sunday.

With their 1-1 stalemate at Sugar Ray Xulu Stadium in Durban yesterday, Sundowns made it four points out of a possible six, having collected the spoils with a 2-0 win over TS Galaxy on Tuesday.

The Brazilians not only maintained their unbeaten league run, they also kept fellow pace-setters Swallows at bay, with just three points separating the two.

Swallows are away at Black Leopards in Thohoyandou in Limpopo this afternoon, but a win for the Birds might still not be enough to dislodge Sundowns, who have a superior goal difference.

Back to yesterday’s game in Clermont, the draw also meant that Arrows maintained their unblemished record, even though coach Mandla Ngcikazi’s side has now registered the most stalemates in the campaign – six so far – against two wins in eight outings.

Sundowns rounded off what has been a difficult week in their camp following the passing of their defender Motjeka Madisha, who tragically died in a car accident on Sunday.

But the unblemished record means different things to the sides.

In contrast, Sundowns have been amassing the points, which has kept them on top of the log since the new season kicked off at the end of October.

Yesterday, the defending league champions were up against a side that has always proved to be a hard nut to crack.

The fact that Sundowns had former Arrows coach Steve Komphela on the bench mattered little as Ngcikazi’s team frustrated their more illustrious opponents the whole afternoon.

The visitors took an early lead through debutant Mothobi Mvala, who headed home from a corner kick 17 minutes into his first game for Sundowns. He joined them from the now defunct Highlands Park at the start of this season.

But Arrows were back level following some excellent inter-passing that led to Michael Gumede’s equaliser five minutes later.

Read: A dark cloud is hovering above us – Mngqithi

Generally, it was a balanced game, but Arrows will feel hard done by over some of the referee’s decisions that went against them.

One such was when Sundowns defender Ricardo Nascimento got away with a clear handball that could have resulted in a penalty for Arrows.

While other PSL clubs wrapped up their programmes for the year this weekend, Sundowns still have a CAF Champions League assignment to deal with before they go for the recess.

The multiple championship-winning South African team travels to Botswana for a clash with Jwaneng Galaxy on Tuesday in the second preliminary round of the continental club competition.

The same applies for Kaizer Chiefs, Orlando Pirates and Bloemfontein Celtic – the country’s other representatives in the CAF inter-club competitions.

Chiefs host Angolan champions Primeiro de Agosto in the first leg of the second preliminary round of their fixture at FNB Stadium on Tuesday.

On the same day, Pirates will be away in Luanda, Angola, for a CAF Confederation Cup first meeting with Sagrada Esperança.

Celtic, who have also advanced to the second preliminary stage of the second-tier competition, host Rivers United of Nigeria in Bloemfontein on Tuesday.

Meanwhile, Sundowns will restart their Premiership campaign in the new year with a blockbuster fixture against Pirates at Loftus Versfeld on January 2.

We live in a world where facts and fiction get blurred
In times of uncertainty you need journalism you can trust. For only R75 per month, you have access to a world of in-depth analyses, investigative journalism, top opinions and a range of features. Journalism strengthens democracy. Invest in the future today.
Subscribe to News24
Related Links
Sundowns coach Manqoba Mngqithi in hot water
A season of firsts as SA populates CAF stage
Laffor: ‘This is not the end, life has to go on’
Next on City Press
SA Under-23s get early return ticket from Olympics