The role Ntseki has played in his two-year spell with Bafana has been more behind the scenes.

But Baxter singled out his right-hand man for special praise this week when he confirmed his technical team ahead of the Afcon tournament, which kicks off in Egypt on June 21. Baxter said Ntseki always had his back.

“We try to speak the same language with the players, even though his languages [vernacular and Afrikaans] are a little bit difficult for me to understand sometimes. But he has been brilliant and he will continue [in the role].” 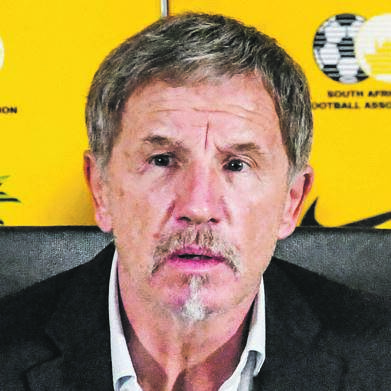 Ntseki’s role has been that of a scout who profiles players. The 30-man Afcon provisional squad announced this week was partly due to his influence.

He is required to follow the action everywhere – either attending matches or watching some games on TV.

Some of the players who surprisingly did not make the provisional team were SuperSport United utility player Aubrey Modiba and France-based Lebogang Phiri. Ntseki said scouting players was a process that had been going on behind the scenes for the entire season.

Even players from small clubs were considered.

“In essence, when you look at the 30 names, you should have a starting 11 and ask yourself if the 12 on the bench can come in more than one position,” the former school teacher told City Press.

The team will be whittled down to 23 before the final list is submitted 10 days before the start of the Afcon.

“It was not about following the players we had in the team, but [looking at] others who could come in, such as [Orlando Pirates midfielder] Ben Motshwari,” said the former first division player.

Ntseki (49), from Botshabelo township in the Free State, said the selection was made in line with the profiles of Bafana’s opponents in Group D – Ivory Coast, Namibia and Morocco.

Ntseki – who guided the SA Under-17 team at the 2015 World Cup – has been involved with the national teams at all levels for 10 years.

Baxter announced two squads this week – one for Afcon and the other for the Cosafa Cup in Durban.

The format was prompted by CAF postponing the Under-23 qualifiers, which were moved from next month to September.

The Cosafa squad – which assembles today – will be guided by David Notoane.

South Africa has been given a bye at Cosafa and Notoane’s Olympic hopefuls will face Botswana in the quarterfinals at Princess Magogo Stadium next Sunday.

Baxter and Ntseki would oversee the Bafana training camp in Johannesburg next week.

Bafana will kick off their campaign against Ivory Coast on June 24; face Namibia four days later and; round off the group phase against Morocco on July 1.

We live in a world where facts and fiction get blurred
In times of uncertainty you need journalism you can trust. For only R75 per month, you have access to a world of in-depth analyses, investigative journalism, top opinions and a range of features. Journalism strengthens democracy. Invest in the future today.
Subscribe to News24
Related Links
Baxter lauds Tau, outlines Afcon plans
Baxter opens Afcon door for young guns
Pressing Issues: Dear Stuart Baxter, do you take the South African nation seriously?
Next on City Press
Look who’s back for the Proteas