Baku prepares to host the battle of London Willian of Chelsea and Pierre-Emerick Aubameyang of Arsenal do battle on the field. The two sides will contest the Europa League Cup on Wednesday. Picture: Visionhaus /Getty Images

As Arsenal and Chelsea head towards Baku, Azerbaijan, for Wednesday’s Uefa Europa League final, much of the focus is on the venue rather than the game itself.

Arsenal have already announced that attacking midfielder Henrikh Mkhitaryan will not be part of the Gunners’ squad for the match in the Olympic Stadium in the capital city.

Mkhitaryan comes from Armenia – a country with which Azerbaijan has no diplomatic relations. The two are involved in an ongoing conflict over a disputed region within Azerbaijani borders.

“We have thoroughly explored all the options for Micki to be part of the squad, but, after discussing this with Micki and his family, we have collectively agreed he will not be in our travelling party,” Arsenal said.

“We have written to Uefa expressing our deep concerns about this situation. Micki has been a key player in our run to the final, so this is a big loss for us from a team perspective.”

Even Jürgen Klopp, whose Liverpool side will be playing in the Champions League final in Madrid a few days later has weighed in on Uefa’s decision to host the final in Azerbaijan, a country that has been accused of a lack of press freedom and of violating human rights.

Only 6 000 tickets have been allocated to each finalist, although the stadium seats 68 000. But the lack of enthusiasm from fans to travel to Baku has seen teams hand back half their respective allocations.

Willian of Chelsea and Pierre-Emerick Aubameyang of Arsenal do battle on the field. The two sides will contest the Europa League Cup on Wednesday. Picture: Visionhaus /Getty Images

Arsenal coach Unai Emery, who has won the competition thrice with Sevilla, has a big decision to make over who to play in goals. Petr Cech, who has been the club’s cup goalkeeper, has been linked with a move to Chelsea as a technical director. Some pundits have suggested that Emery should, under the circumstances, opt to give first-choice keeper Bernd Leno the chance to shine in Baku.

Like his Arsenal counterpart, Chelsea boss Maurizio Sarri will be without some of his players. The Blues played a charity match in the US at the end of the Premier League season, and Ruben Loftus-Cheek suffered a ruptured Achilles tendon in the 3-0 victory against the New England Revolution.

Sarri, who was critical of the timing of the friendly match, said that it was a pity he could not pick Loftus-Cheek.

Also missing from the Chelsea line-up is defender Antonio Rüdiger and Callum Hudson-Odoi, and a question mark hangs over N’Golo Kanté.

“Of course, we are trying to recover Kanté. He has started participating in some parts of training, so we are optimistic he will be able to play the final.”

The Italian said he felt for Chelsea’s supporters.

“The location is a big problem for our fans. It would be better in another location. Probably the situation will be the same for both teams, but for everybody, it is better to play with 30 000 fans of Chelsea and 30 000 fans of Arsenal.

“Usually against Arsenal, it’s an open match. They have two very dangerous strikers, Alexandre Lacazette and Pierre-Emerick Aubameyang. They are very dangerous as a team in the offensive phase. They are aggressive and able to press well in the opposition half, so it’s not easy to play against them. Their coach worked very well, so [we expect] a difficult match.”

Unlike Arsenal, Chelsea have qualified for next season’s Champions League, but a win on Wednesday will see the Gunners become the fifth English team in the lucrative competition next season.

Emery said he was aware of the importance of the competition: “We need to battle against them. We finished behind them in the Premier League and, last year, they were in front of us.”

We live in a world where facts and fiction get blurred
In times of uncertainty you need journalism you can trust. For only R75 per month, you have access to a world of in-depth analyses, investigative journalism, top opinions and a range of features. Journalism strengthens democracy. Invest in the future today.
Subscribe to News24
Related Links
Hanging Judge: When is offside not offside?
Millions at stake as Arsenal take on Man United
Spurs and Arsenal bring action galore but end with draw
Next on City Press
'Thank you, God, for soccer, for Maradona' 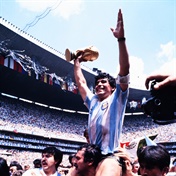