Benni in the Bafana Zone 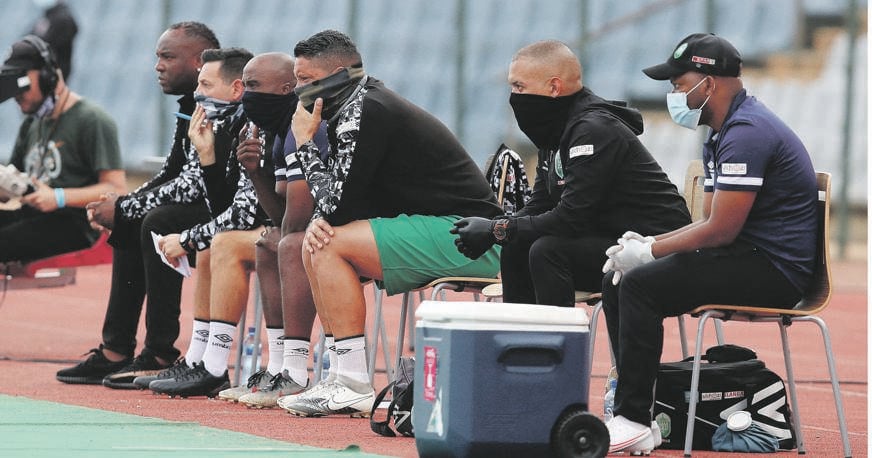 “For now, he’ll monitor the players and officially assume his duties on May 29 to prepare for the Zimbabwe game next month,” said the official.

“It’s true that he’ll come with his own assistants and this is a move from what Safa used to do by appointing assistants for the coach. Benni was adamant that he wanted his own backroom staff and Safa had to give in.”

However, this move has seemingly irked his employers, AmaZulu, who are unhappy that the deal was done behind their backs.

The timing of the pursuit is at the centre of Usuthu’s annoyance, as the club is fighting for the DStv Premiership title. They believe this could destabilise the team and make their coach lose focus.

AmaZulu chairperson Sandile Zungu told City Press that, having not been officially informed of his coach’s imminent move to the Bafana hot seat, he was still treating the news as hearsay.

“We haven’t heard anything from Safa and, to us, it’s still a mere rumour,” said Zungu.

He said McCarthy was still their coach and their aim was to keep him as long as possible.

He’s contracted to us and he’s done a fantastic job for us. Ideally, we’d love to keep him for the next 10 years
AmaZulu chairperson Sandile Zungu

“He’s contracted to us and he’s done a fantastic job for us. Ideally, we’d love to keep him for the next 10 years, just like Pitso [Mosimane] at Sundowns.”

Zungu referred to the rumours as being disruptive, but said: “They won’t succeed in destabilising us.”

He would not discuss what AmaZulu would do regarding the issue of compensation.

“That’s a hypothetical question and I won’t respond to it,” he said.

He said it was concerning that he had to field calls about his coach’s move instead of concentrating on yesterday’s KwaZulu-Natal match.

“We have a very important game today [Saturday] that we should be concentrating on, but, instead, I’ve been taking calls about my coach. But this won’t destabilise us,” he repeated.

WE HAVE OUR MAN

On Friday, Safa issued a statement confirming that a new coach had been appointed.

“Safa has finalised outstanding matters with the new incoming coach and the announcement will be made next week,” said the association’s CEO, Tebogo Motlanthe.

With not long to go before Bafana’s opening Qatar World Cup qualifier against Zimbabwe in the first week of next month, Safa had to move quickly to secure the services of a coach after failing to tie down their preferred candidate, Carlos Queiroz.

According to the Safa official, McCarthy fitted the bill, as he had all the requirements they were looking for.

“Remember, this isn’t just about the World Cup qualifiers. It’s also about a long-term relationship that will go beyond the Qatar World Cup, even if [we don’t] qualify. Much as we want to qualify for next year’s World Cup, we’re cognisant of the fact that this is short notice and we need to plan ahead. We believe Benni is the right man to take us forward and we’re confident he’ll do well.”

McCarthy has transformed AmaZulu into a formidable side since he joined in December.

Under the stewardship of Bafana’s leading goal-scorer with 31 goals, AmaZulu have moved from relegation candidates to title challengers. They overtook Sundowns at the summit of the log yesterday, following their narrow 1-0 victory over Golden Arrows.

With their victory, Usuthu became the first side to break the 50-point mark, as they were sitting exactly on 50 points. However, Sundowns have played three games fewer.

Listen to our latest podcasts.
Voting Booth
According to a letter Health Minister Joe Phaahla sent to MECs, the country is ready to get rid of masks in public as a health protocol. Is it time to go maskless?
Please select an option Oops! Something went wrong, please try again later.
About time
66% - 107 votes
No
34% - 55 votes
Previous Results