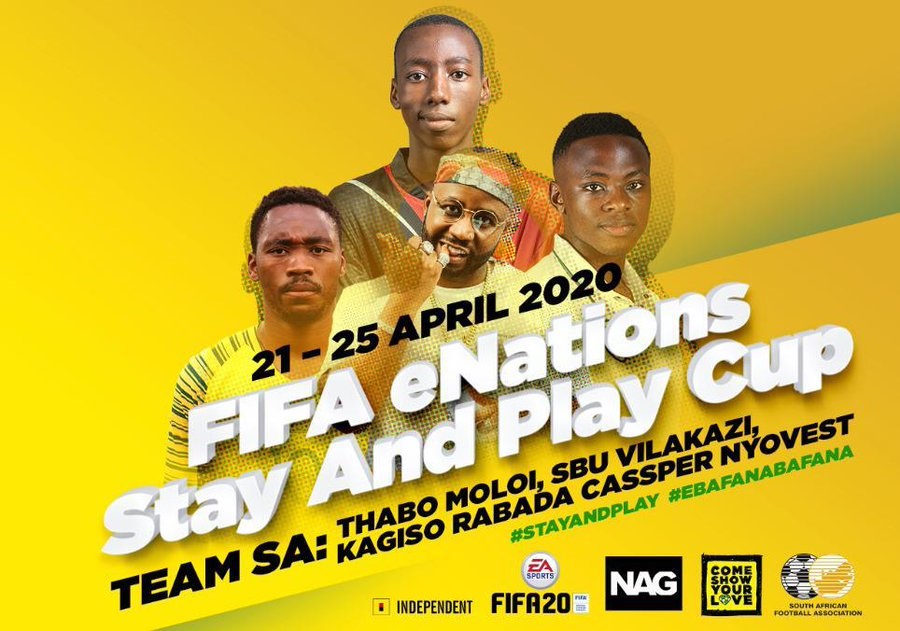 This week Bafana Bafana called up a rapper, a cricketer and an 18-year-old gamer to help Sibusiso Vilakazi take part in a football tournament from the comfort of their lounges.

The idea of the tournament was to encourage people to stay at home during the Covid-19 coronavirus pandemic. Proceeds from the tournament to go a national charity helping to fight the virus. Safa chose the Nelson Mandela Children’s Fund as their charity.

Unfortunately, the eBafana team was knocked out after losing their second and third round games against Saudi Arabia and Qatar on Wednesday. However, their round one game against the United Arab Emirates showed the team’s potential as they won 12-8 over two legs.

Led by professional Fifa player Thabo “YvngSavage” Moloi, the team initially comprised of Cassper Nyovest, Kagiso Rabada and Vilakazi, but a substitute had to be made with Rabada’s Protea team mate Andile Phehlukwayo coming in due to some logistical and technical issues.

“I didn’t expect to play with some of the people I look up to,” the 18-year-old Moloi says. “I listen to a lot of music so to actually speak to Nyovest was a great feeling.”

Moloi says he was not intimated by being the professional gamer in the team and that “being the captain helped in trying to teach them what I know”.

Moloi opened eBafana’s account in the first game on Tuesday with an 8-2 thrashing of the UAE, which was followed by Vilakazi putting on a concerted effort despite his 6-4 loss in the second leg. However, on aggregate South Africa managed to win the tie and claim three points.

Watch Round 1 - SA vs UAE Thabo Moloi from BafanaBafana on www.twitch.tv

The second round on Tuesday, against Qatar, had to be postponed due to connectivity issues. On Wednesday the game finally got under way, however, Rabada could not take part due to a prior commitment and so Phehlukwayo took his place. Despite a second half resurgence, Phehlukwayo was beaten 6-4 and it was all left to the professional Moloi to mount a comeback.

But it was not to be as the second leg had to be abandoned, not because of a pandemic, weather conditions or protests, but due to “technical glitches in the Fifa [game] system and the network”. This meant that the 6-4 loss became the aggregate and eBafana lost the round.

Moloi says that South African gamers struggle with connectivity issues a lot when they play against overseas opponents. “Sometimes there is a five-second delay so you have to try and plan for that. I’m used to it now, but for some new guys it can be difficult to get used to it,” he says.

Despite that a mouth watering-encounter was on the cards as round three saw South Africa take on gamers from Saudi Arabia, with former Fifa eWorld Cup winner Mosaad “MSdossary” Aldossary set to battle the South African number one PlayStation Fifa gamer Moloi.

Even though Aldossary scored two quick goals in the opening 15 minutes (game time, not real time) it was an absorbing game that saw Moloi, on the back foot, trying to stage a comeback of sorts with a few technical changes to his team.

Just before the end of the half he got one goal back, but that was short-lived because within 15 minutes the former world champ and eSports player of the year restored his two-goal cushion.

After that it was a “park the bus” strategy for Aldossary while Moloi tried every trick in the book to score, even managing to hit the crossbar with one sensational attack.

Moloi says that playing against some of the world’s top gamers is not a novelty anymore and that with better connection and network we would already have seen more South Africans in the top echelons of pro gaming. The game ended 3-1 to Aldossary, and that set up the Middle East nation with a solid platform as Nyovest took the reins, or rather controller, for the second leg.

Nyovest notoriously took on Trevor Noah in a recent Fifa match-up but lost to the US-based comedian. However, with some experience under his belt and a jibe at Bafana keeper Itumeleng Khune – who Nyovest claims has been “ducking these hands” – the rapper entered the virtual realm with confidence.

Trevor is a pro. I didnt know until I was told by the top Fifa players that Trevor been jamming. Khune keeps ducking these hands cause he knows. He doesn't wanna end up on social media with a bad score. https://t.co/pthrXuE7Ti

That all soon evaporated as, time after time, Nyovest was beaten in defence as he struggled to form any tangible attack. The final score ended in a 5-0 whitewash – which some sources claiming this is grounds for Nyovest to call a loved one and “confess” his poor gaming skills.

Moloi stood up for his eBafana team-mate by rating him a six out of 10.

“He is a good player, it’s just that the connection was really slow and I guess he wasn’t used to that type of connection. There is no skill gap in delay,” the pro-gamer said.

He gave Vilakazi a seven out of 10, mainly because he scored a few more goals.

The tournament ended in the group stages for the South Africans but with the fire lit and the popularity of gaming on the rise, we will see more from this burgeoning industry.