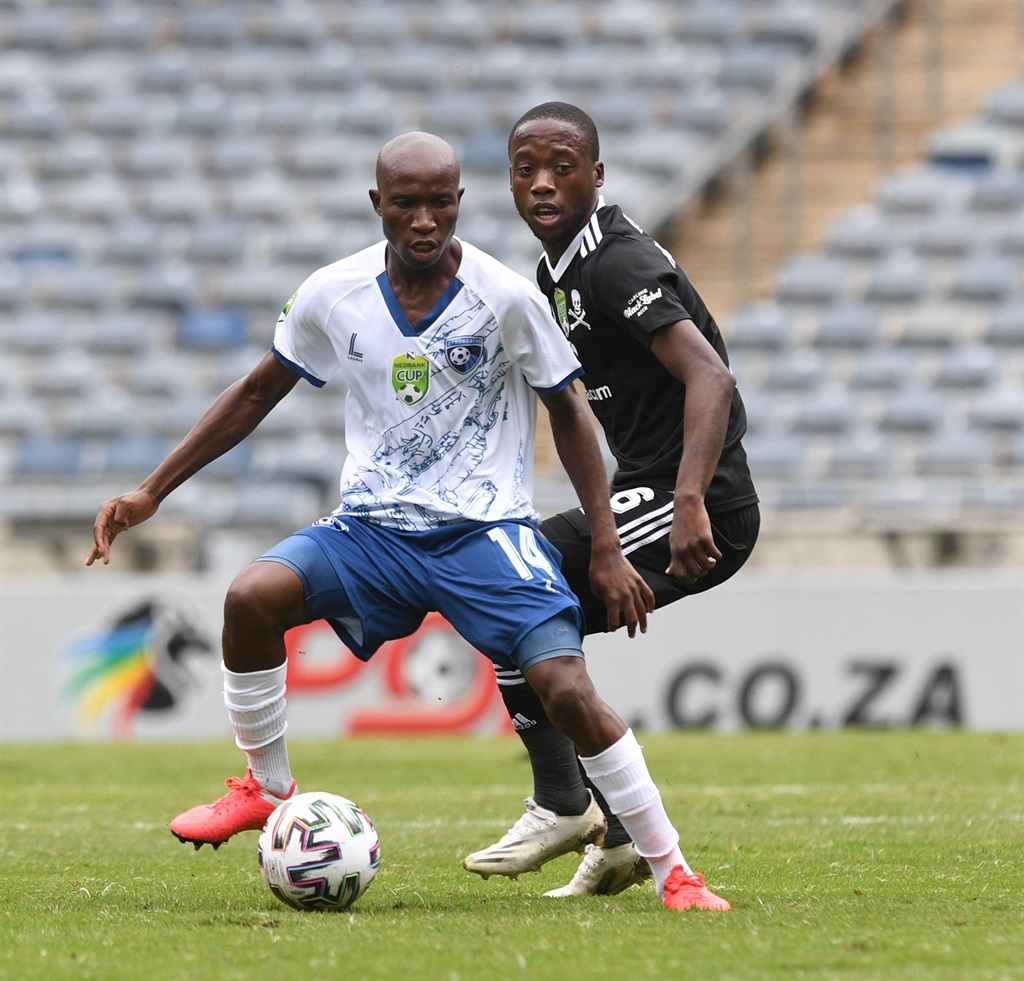 Thapelo Maleka of Uthongathi challenged by Ben Motshwari of Orlando Pirates during the 2021 Nedbank Cup - Last 32 match between Orlando Pirates and Uthongathi on the 06 February 2020 at Orlando Stadium, Soweto Picture: Sydney Mahlangu/BackpagePix

Orlando Pirates continued their unbeaten record in cup competitions this season, although they were made to sweat by a tenacious Uthongathi FC in their Nedbank Cup first-round win at Orlando Stadium yesterday.

The Buccaneers’ unblemished record is a continuation from their run in the MTN8, which they lifted in December, and they are now looking to do the same in the R7 million Ke Yona cup.

Uthongathi made Pirates earn their money though, through a gutsy performance by the GaldAfrica Championship campaigners from KwaZulu-Natal.

Bucs striker Gabadinho Mhango grabbed the winner in the 64th minute to help his team march into the last 16 round.

While the Sea Robbers have bagged positive results in cup competitions, their league form leaves a lot to be desired.

Pirates went into the match yesterday having been humbled 2-0 by Golden Arrows in their Premiership league encounter on Tuesday.

In that match in Durban, Bucs coach Josef Zinnbauer fielded a team without an outright striker.

Winger Thembinkosi Lorch led the attack the last time out, but the German tactician went with Mhango upfront yesterday.

The Soweto giants remain without main strikers Zakhele Lepasa and Tshegofatso Mabasa, who are sidelined by injury.

Zinnbauer handed defender Thabiso Sesane his PSL debut and the teenager gave a solid performance at left back, until he was replaced by Linda Mntambo towards the end of the match.

Sesane made his official debut for Pirates in the team’s 1-0 away win over Angola’s Sagrada Esperança in the CAF Confederation Cup in December.

The 19-year-old is another young player Bucs have given a chance in their star-studded squad, with 18-year-old Ayanda Tshobeni having recently earned his debut.

While Uthongathi held their own against their much-fancied opponents, their lack of experience worked against them at times.

The Tongaat-based outfit had their moments in the opening half, but they all went to waste, either because of indecisiveness or players being hesitant in front of goal.

On the other hand, Pirates’ Mhango was just eager to reclaim his place in the team. The Malawian international at times tried too hard, but he eventually utilised the moment that settled the game in Orlando on a rainy afternoon.

The encounter was also a chance for the Uthongathi players to make a name for themselves. An impressive performance against a powerhouse such as Pirates could propel any player to stardom and a lucrative contract.

And the team, coached by Simo Dladla, have nothing to be ashamed of after their satisfying performance. In fact, Uthongathi had a few chances to snatch victory from the hosts, but lack of experience was their only undoing.

Midfielder Thapelo Maleka looked to be the catalyst for his team, but he fell short against the seasoned duo of Thabang Monare and Ben Motshwari.

Last season, Pirates were eliminated in the first round of the Nedbank Cup by the now defunct Bidvest Wits. The teams played to an exciting 3-3 draw before Wits progressed with a 3-2 penalty shoot-out win.

READ: Ke Yona upsets could be on the cards as Pirates and Chiefs face tricky NFD opponents

Ironically, many of the players who starred for Wits in that win are now employed by the Buccaneers. Deon Hotto, Thulani Hlatshwayo and Monare played for the university side.

As expected, Bucs channelled much of their attack to the left side, where Hotto was operating. However, the Namibian international did not always find the intended target with his crosses. The ploy was to play crosses into the box, but it was not the best tactical option.

Mhango was closely watched by the central defensive duo of Ntsikelelo Nxadi and Xolani Slawula.

Uthongathi’s defence must be commended for holding up against a barrage of attacks from Bucs. They will now turn their attention to the NFD, where they are three points behind leaders Sekhukhune United, in their quest for promotion.

We live in a world where facts and fiction get blurred
In times of uncertainty you need journalism you can trust. For only R75 per month, you have access to a world of in-depth analyses, investigative journalism, top opinions and a range of features. Journalism strengthens democracy. Invest in the future today.
Subscribe to News24
Related Links
Pirates rule Soweto - again
Gavin promises to go all out in hunt for his first win over equally stressed Zinnbauer
Ever-present Nyauza has kept Bucs’ back door shut
Next on City Press
Mahlasela and Maart revive careers in lower division