A general view of the Hillsbrough signage on the Hillsborough Stadium in Sheffield. Picture: Stu Forster/Getty Images

The police commander in charge of operations at the 1989 Hillsborough football stadium crush that killed 96 Liverpool supporters was found not guilty of manslaughter on Thursday.

Former Chief Superintendent David Duckenfield was in charge of the stadium in Sheffield, northern England, at an FA Cup semifinal match against Nottingham Forest 30 years ago.

Police at first blamed the disaster on drunken fans, an explanation that was always rejected by survivors, relatives of the victims and the wider Liverpool community who spent years fighting to find out what had happened.

Later inquests and an independent inquiry absolved the fans of any responsibility. The latest verdict came in a re-trial at Preston Crown Court after a jury in April had initially failed to come to a verdict.

“I’m shocked and stunned by the verdict of the jury,” said Barry Devonside, whose son Christopher died aged 18 in the disaster.

“We, the families, have fought for 30 years valiantly,” he told the BBC. Players and fans pay their respects for the 30th anniversary of the Hillsborough tragedy. PIcture: Michael Regan/Getty Images

Mike Bendown, director of the Independent Office for Police Conduct, said they recognised the verdict would be of huge significance for the families of the 96 victims.

“As there are still live criminal proceedings relating to the disaster we will not be commenting further at this time,” he added, urging people not to prejudice those cases with comments online.

The Crown Prosecution Service (CPS) said it was aware the verdict would be disappointing for the relatives.

“The disaster at Hillsborough 30 years ago has caused unimaginable suffering to the families of those who sadly lost their lives and to everybody affected by the tragic events of that day,” said Sue Hemming, CPS Director of Legal Services.

“They were let down with the most catastrophic consequences imaginable. I know how important these proceedings have been to everyone, even though they came far too late.” 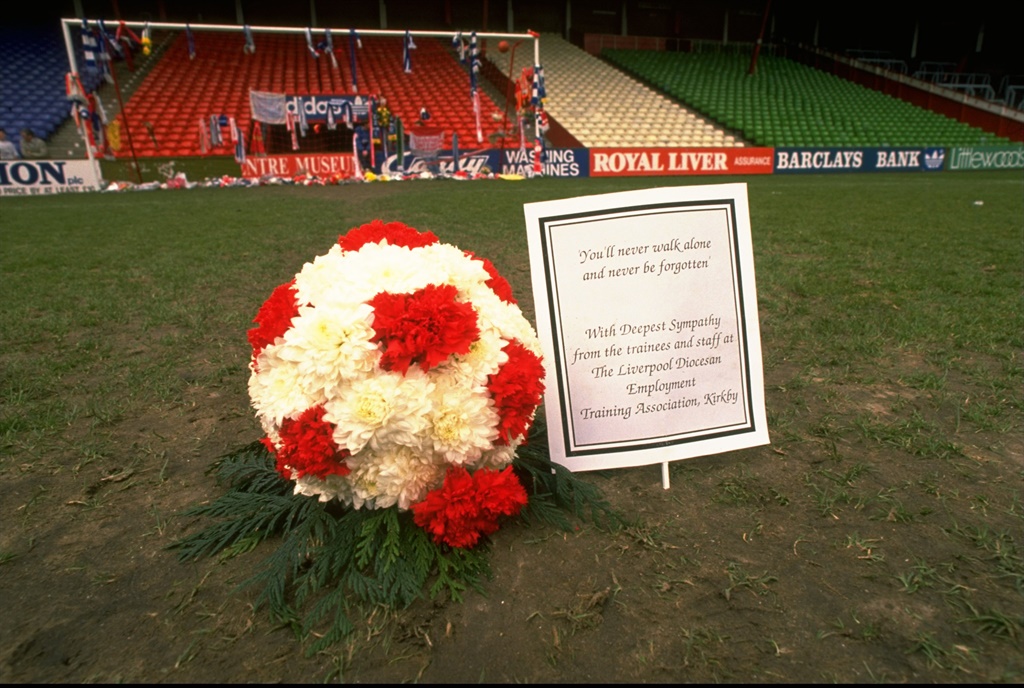 A floral football lies on the pitch in tribute after the Hillsborough disaster at Anfield in Liverpool, England. Picture: Pascal Rondeau/Allsport

Mayor of Liverpool Joe Anderson said the outcome was a “huge disappointment” for the families of the victims.

“In recent years they have had to relive the events of that day by sitting through the longest inquest in British legal history, followed by two trials. The toll that it has taken on their health and wellbeing, in addition to losing their loved ones, is unimaginable and the whole city shares their pain”.

Graham Mackrell, the Sheffield Wednesday club secretary at the time of the disaster, was found guilty of a charge under the Health and Safety at Work Act, in the previous trial.

Former South Yorkshire Police chief superintendent Donald Denton, the force’s detective chief inspector Alan Foster, and Peter Metcalf a lawyer who acted for police, are scheduled to stand trial on charges of perverting the course of justice next year.

Liverpool Football Club said: “We share the reactions and frustrations by the families today and those affected by the Hillsborough tragedy.”

The club said in a statement that it was limiting its comments due to the ongoing legal proceedings but it commended the families, survivors and campaigners “for the remarkable courage, dignity and resilience they have shown during the past three decades”. - Reuters

We live in a world where facts and fiction get blurred
In times of uncertainty you need journalism you can trust. For only R75 per month, you have access to a world of in-depth analyses, investigative journalism, top opinions and a range of features. Journalism strengthens democracy. Invest in the future today.
Subscribe to News24
Related Links
Jury: Hillsborough disaster was manslaughter
Next on City Press
Chiefs camp ravaged by Covid-19, requests postponement of PSL games