Middendorp already on the back foot at Chiefs 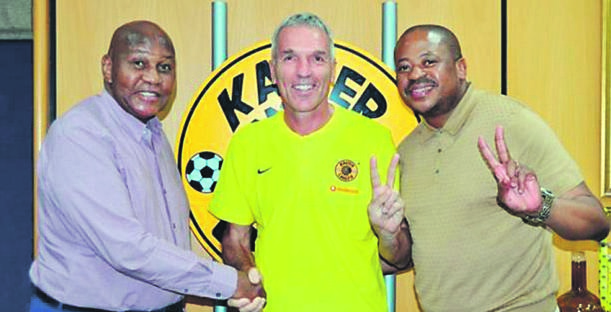 While they were still celebrating the long-overdue departure of Giovanni Solinas, their ecstasy turned into misery after the club announced Ernst Middendorp as his replacement.

By all accounts, Amakhosi supporters have a reason to not celebrate his appointment – they already know what to expect and what the club has gotten itself into.

The new coach has already been condemned – even before he started his job.

Critics feel it is the same script with the same cast and will have the same ending.

Once again, Middendorp’s appointment shows signs of desperation from the Chiefs management. It looks like an easy way out – just like it did with Solinas. Or is it a case of, in the absence of the best, make the worst the best?

With the season almost at the halfway stage, the German will have to hit the ground running. Chiefs play their 15th game against SuperSport United on Wednesday before taking a three-week break on the domestic front.

However, they will have continental football to take care of as they are scheduled to host Madagascan side Elgeco Plus on Saturday and play the return leg a week later on the east African island in the second round of the CAF Confederation Cup.

Middendorp will be hoping to use the short break to instil his playing philosophy and tactics before meeting rivals Mamelodi Sundowns in the opening weekend of the new year.

The club pointed out on its website on Friday that it won several trophies under Middendorp – the Absa Cup, SAA Supa 8 and Telkom Knockout.

Motaung said he hoped the German coach could bring stability to the club: “We were looking for a coach who is experienced and who has an understanding of the club’s footballing culture.

"Middendorp also understands South African football well, having a vast knowledge and experience of our local football. We are looking forward to working together.”

Under the Italian mentor, Chiefs were rudderless and not convincing at all. Players seemed to have struggled to understand his coaching method.

Chopping and changing his team was also his downfall as the players lacked cohesion and understanding of each other.

What could work in Middendorp’s favour is his ability to bring out the best in players. He is also known as a master tactician and disciplinarian, and those who have worked with him have high regard for him. They say he will bring stability and discipline to the side.

“He knows how to balance the side. I have always enjoyed his training sessions because he pays attention to detail. Players are going to enjoy themselves,” said one assistant who worked with him before.

It is widely known that Middendorp has a short fuse and explodes easily. His lack of people skills could work against him at Chiefs.

With most South African players not taking kindly to being openly criticised and publicly ridiculed, he will have to control his temper in the technical area.

He will also have to manage his squad adequately – some players felt like outcasts under Solinas due to lack of game time.

With the team struggling to get going, Middendorp has his work cut out for him. Already, many are not giving him a chance, but this could work in his favour because nothing much is expected from him.

If he fails, many won’t be surprised. He has a lot of convincing to do to prove his critics wrong.

After all, he has already been ruled out of the league title contention.

Only time will tell if he is up to the task or if Chiefs supporters were correct in dismissing his appointment outright.