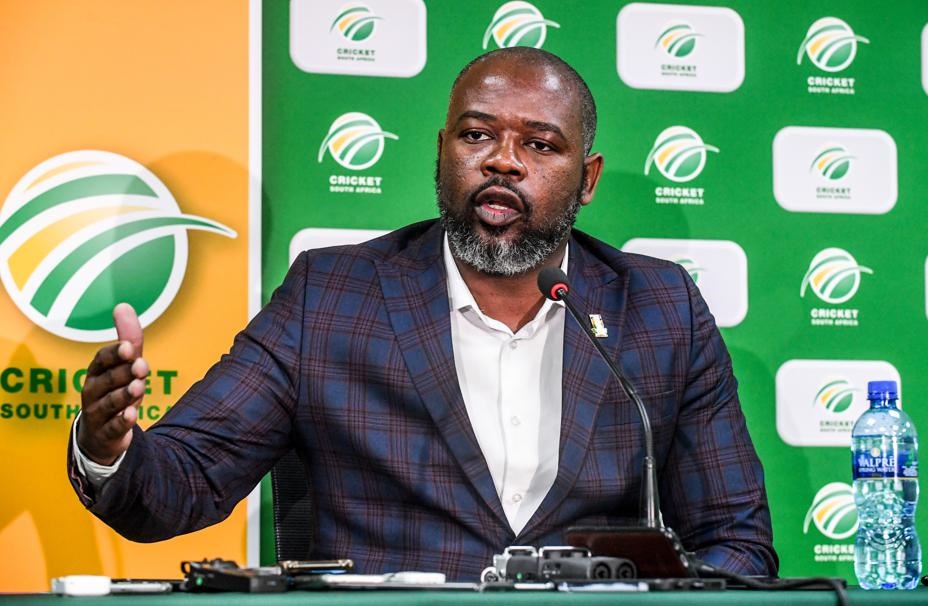 More power and more accountability is what the new cricket structure in South Africa is all about.

That was the sentiment at a media briefing on Tuesday morning at Cricket South Africa’s (CSA) headquarters in Johannesburg.

Thabang Moroe, CSA’s chief executive, said that a new strategy was needed from CSA and its management, especially in terms of what they would like to see going forward to the 2023 World Cup.

“To adopt this strategy accountability was the key factor. We took most of the responsibilities that used to lie with the board and those responsibilities are now passed on to the CEO, myself, and then I was encouraged by the board to do the same, to empower the management staff that will be reporting to me with necessary power-making decisions so that I am able to hold them to account.”

The new structure essentially adds one extra person to the management layer that directly reports to Moroe – that of director of cricket.

That will leave Moroe to focus on other organisational responsibilities while the director of cricket focuses solely on cricketing affairs.

Moroe stressed that this was a hard-sell to CSA’s board who “essentially agreed to letting go of all this power and to give it to management”.

Corrie van Zyl, the acting director of cricket, who will oversee all national teams for the time being, now has the arduous task of selecting the new team manager (formerly head coach) after Ottis Gibson was sacked when the team was unceremoniously bundled out of cricket’s premier competition.

He said that he was “well advanced in terms of the coaching staff”.

The new team manger would need to have “the technical ability, tactical ability, strategic ability to take the team to 2023, and the milestones on that road, like the T20 World Cup in 2020 and the Test Championship. As well as a person who could work well with the captains, who could get the best out of the team, who is tactically astute and has the ability to drive and be firm on what he believes to be the way forward,” Van Zyl said.

Van Zyl also confirmed that Faf du Plessis would still be captain of the Test team that toured India in October but did say they were looking at alternatives for the shorter formats of the game.

“We need a strategy to 2023, so we will look at how we approach that. But we are having a selection meeting [this week] to confirm that.”

“No breakdown with Saca”

Another concern for CSA was the relationship with the South African Cricketers’ Association, which had filed an application at the Johannesburg High Court over CSA’s decision to restructure domestic cricket in South Africa.

Moroe said that, despite this, “there’s no breakdown” in the communication process and that CSA had informal talks with Saca chief executive Tony Irish.

“In fact, Saca has agreed to a meeting with Cricket South Africa to iron out these matters,” Moroe said, adding that Saca was a key part of CSA’s vision.

Yet Moroe made it clear that if the matter were to go to court “we would defend our views as CSA”, referring to the restructuring of domestic cricket.

On what went wrong with the team

Moroe, when pressed for specifics on what CSA were unhappy with that led to the restructuring, said that the batting deteriorated and raised concerns from CSA’s perspective, while the style of play was not what they expected.

He also said that the culture within the set-up needed a fresh look.

He mentioned, however, that those issues would be addressed away from the public eye in an effort not to air dirty laundry in public.

Why and how Ottis was sacked

Moroe also took time to explain what led to Gibson being fired and said that it was not a decision taken straight off the bat but that he took Gibson’s suggestion to stay on till April 2021 to the board who did initially agree, but with conditions.

“Part of the board agreeing or what the board essentially said to me: ‘We are agreeing that you can go ahead and extend the coach’s contract subject to him agreeing to key specific pointers in his contract changing.’”

Some of those conditions were around transformation targets, better communication, performances and who had the final say on team selection, Moroe said.

Gibson, Moroe stated, could not agree to that until he saw his contract, to which the board then said they will “put his contract on ice” and judge him on “his performances at the World Cup”.

A word on Dale Steyn

On Monday Protea fast bowler Dale Steyn hung up his Test boots with a phenomenal record to his name.

With 93 Tests under his boots, the “Phalaborwa Express” took 439 wickets at an average of 22.95 and an economy rate of 3.24, racking up 26 five-wicket hauls since his debut against England in December 2004.

Steyn will continue to be available for white-ball cricket as he tries to manage his workload after numerous injuries that finally saw him unable to take part in the World Cup.

“He’s a legend. He’s a living legend. He’s going to be sorely missed, as far as the test arena is concerned, but has taken a pretty wise and bold decision in trying to prolong his career at international level. We fully support him as management of CSA,” Moroe said.

We live in a world where facts and fiction get blurred
In times of uncertainty you need journalism you can trust. For 14 free days, you can have access to a world of in-depth analyses, investigative journalism, top opinions and a range of features. Journalism strengthens democracy. Invest in the future today. Thereafter you will be billed R75 per month. You can cancel anytime and if you cancel within 14 days you won't be billed.
Subscribe to News24
Related Links
New cricket plan will cost a billion
Side Entry: Proteas will win World Cup only if cricket becomes our collective currency
We do have problems, but all is not lost
Next on City Press
Shandu eyes CAF glory in stellar debut season with Pirates