Professional league a must for Proteas 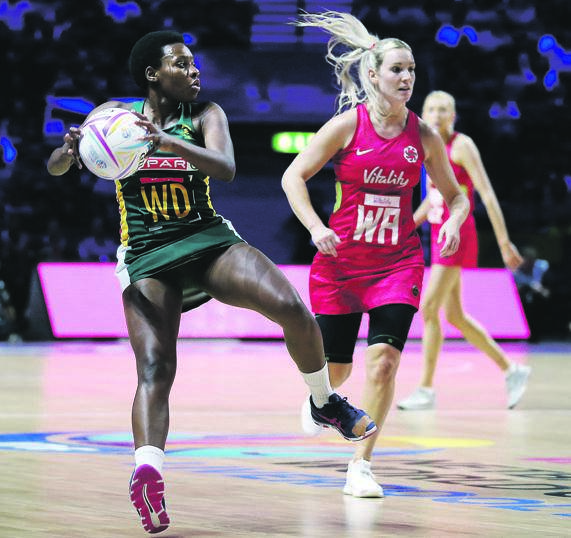 Before taking charge of her first game as coach of the Proteas – a Diamond Challenge match against Malawi – Norma Plummer told her team: “This is where you find out who your friends in the trenches are.”

By her last game in charge, a bronze medal rubber 58-42 loss against hosts England at the World Championships last month – four years and about 50 matches later, one got the impression the penny of that original message had finally dropped.

The Proteas may have failed to medal by finishing fourth, but having made their first semifinals since 1995 and giving mighty Australia the hurry up in their two-point defeat in their pulsating semifinal not only pronounced themselves ready to be competitive hosts of the 2023 World Championships, they also showed that a sleeping giant had finally awoken.

Having had time to reflect on the result since the team’s return a fortnight ago, Netball SA president Cecilia Molokoane grappled for the meaning behind the strong performance.

“It means a lot for netball. It means the players have delivered on what they promised,” she said.

“It means the more we’re becoming a force to be reckoned with in the world, the more teams will want to play us, and the more players we’ll have playing overseas. It also shows the world that we’re ready to have a professional league.”

A significant part of the puzzle as to why netball is finally throwing its weight around as the second biggest sports federation in the country was the appointment of Plummer.

The Australian arrived for the Proteas job with a big reputation, having won the World Championships with her home country as both a player and a coach.

A four-test Australia captain as well, Plummer did so well as her country’s coach. She won two World Champs between 2003 and 2011, and she gained a reputation as a tough coach by being named alongside former Manchester United manager Alex Ferguson in an article titled The Nastiest Coaches in Sport.

Plummer’s relentlessness – born of a view that she looks for courage and character in her players “because your opponent will quickly recognise it if you’ve got it or if you haven’t” – was such that she got the odd death threat in New Zealand because her team kept embarrassing the Kiwis.

“Her expertise and knowledge in netball, where she’s won the World Championships and the Commonwealth Games, was what we wanted.

“We wanted her to come and give us a bit of that, not only for the players, but also for our coaches. So we all benefited because she taught us a lot in Netball SA,” she said.

Netball SA played its part by departing from a well-worn path of working against the coach and its stakeholders by doing its level best to support and “not interfere” with the former and improving relations with the latter.

In a visionary move, Netball SA got four local coaches – Dumisani Chauke, Jenny van Dyk, Zanele Mdodana and Dorette Badenhorst – to shadow Plummer during her tenure with a view to succeeding her.

All things being equal, one of them will be anointed the new coach by Plummer (if she doesn’t decide to recommend an outsider), who will mentor the new arrival until they are ready to take over the reins.

“While nine of the 12 players who represented South Africa at the World Championships play their netball overseas, it hasn’t changed their number one priority,” said Molokoane.

“When Netball SA got them in a room and asked them how they saw the sport going forward, they all talked about a professional netball league. The number one thing the players have always wanted to see is netball turning professional because it’s a career for some of them.