Hamilton and his team-mate Valtteri Bottas have shared all eight victories and, in all but two races, they took the top two places on the podium.

Hamilton, who won six out of the eight, has a 36-point lead at the top from Bottas and is a further 50 points ahead of Ferrari’s Sebastian Vettel.

The Mercedes duo have an unbeaten run of 10 races, with a 140-point lead in the Constructor’s Championship.

But it is Max Verstappen who will grab much of the attention as the young Dutchman is Red Bull’s best hope for a good result at their home race.

The 21-year-old, who won in Spielberg last year, is not feeling veryoptimistic: “We will probably finish fourth or fifth, though that depends on Ferrari making mistakes.”

He maximised his car’s performance potential in France last weekend, but that still wasn’t enough to match the speed of both the Mercedes cars and Ferrari’s Charles Leclerc.

“We’re just lacking pace at the moment; you have to accept that. In the meantime, we keep working hard on the car and mostly the power unit, too.” 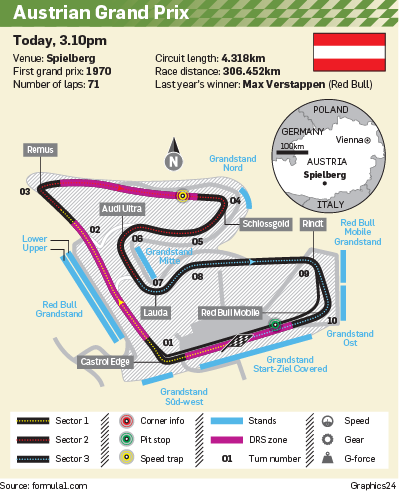 Verstappen has received plenty of praise, with Hamilton’s former Mercedes team-mate Nico Rosberg saying on his YouTube channel that Verstappen is the best driver on the grid after Hamilton.

“He gets the maximum out of the car and grabs the maximum number of points that can be achieved with the RB15,” Rosberg said.

However, Verstappen’s frustration with the car is clear, as he declared that the team have “work to do” following the last grand prix.

Since teaming up with Honda this year, Red Bull just seems to be lacking power compared with the Silver Arrows and are therefore unable to get the results they want.

It is expected that several teams will make changes to their cars ahead of this weekend’s race.

Mercedes suffered a double retirement on the Red Bull Ring last year, prompting Hamilton to be cautious about his chances in the race.

With Europe in the grip of a heat wave, the race could be tricky.

“It’s superhot there, really hard for the brakes. You saw last year, we had two failures in one race, so it’s a hard race for everyone,” Hamilton said.

“We don’t go there with all the confidence in the world – we know that we might have a difficult weekend.”

Leclerc, who finished third last weekend in France, is hoping to take that form into today’s race.

“Austria is one of my favourite circuits,” he said. “It’s quite a different track, so I’m pretty sure we can have a positive weekend.”

Building then commenced to once again rebuild the track, but work was stopped for several years before Red Bull owner Dietrich Mateschitz bought the track and completed the alterations. The renamed Red Bull Ring returned to the Grand Prix circuit in 2014.

Last year, the Spielberg circuit saw several drivers get blistered tyres. However, Pirelli chief Mario Isola is confident that the tyres will hold up this year. He will bring C2, C3 and C4 compound tyres – the same as those used in France.

“The difference is that this year’s compounds are more evenly spaced, which should encourage more varied pit stop strategies and better racing.”

We live in a world where facts and fiction get blurred
In times of uncertainty you need journalism you can trust. For 14 free days, you can have access to a world of in-depth analyses, investigative journalism, top opinions and a range of features. Journalism strengthens democracy. Invest in the future today. Thereafter you will be billed R75 per month. You can cancel anytime and if you cancel within 14 days you won't be billed.
Subscribe to News24
Related Links
Formula One looking for redemption
How F1 created its penalty predicament
Ever wondered how F1 drivers overcome the fear factor?
Next on City Press
UCT to honour Kaizer Chiefs supremo Kaizer Motaung with a doctorate