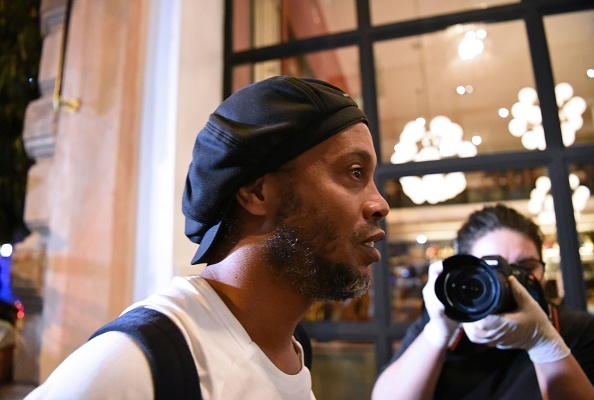 Brazilian soccer legend Ronaldinho has been released from jail and placed in house arrest in Paraguay after he and his brother paid bail of $1.6 million (R29 million). Picture: Norberto DUARTE / AFP) (Photo by NORBERTO DUARTE/AFP via Getty Images)

Brazilian soccer legend Ronaldinho has been released from jail and placed in house arrest in Paraguay after he and his brother paid bail of $1.6 million (R29 million).

The former Barcelona midfielder, who won the World Cup with Brazil in 2002, was arrested on March 6 with his brother and business manager Roberto Assis.

They were accused of possessing doctored Paraguayan passports with a lawyer for the pair claiming their detention was “arbitrary, abusive and illegal”.

The judge said he would permit the pair to move into a local hotel while they awaited their trial and will be allowed to receive visits. The two men deposited $800 000 each into a local bank account on Tuesday, according to international media reports.

READ: What some players have been up to in these crazy times

“It’s a significant bail in cash to guarantee they will not flee,” Judge Gustavo Amarilla was quoted as saying.

The 40-year-old last played professionally in 2015 and was the best player in the world at his peak.

Ronaldinho was twice named Fifa World Player of the Year – in 2004 and 2005. The former Gremio, Flamengo and Paris Saint-Germain forward also won the Champions League with Barcelona in 2006. – Sports reporter

We live in a world where facts and fiction get blurred
In times of uncertainty you need journalism you can trust. For only R75 per month, you have access to a world of in-depth analyses, investigative journalism, top opinions and a range of features. Journalism strengthens democracy. Invest in the future today.
Subscribe to News24
Related Links
What some players have been up to in these crazy times
Jomo Cosmos, Swallows FC bosses reel from ‘double blow’
Coronavirus: Slovakian club goes into liquidation
Next on City Press
‘I don’t feel any pressure. I feel relaxed. You can’t always be perfect’ – Hamilton

view
Voting Booth
Tourism Minister Mmamoloko Kubayi-Ngubane will act as health minister after President Cyril Ramaphosa placed Health Minister Dr Zweli Mkhize on special leave while the SIU completes the probe into the irregular Digital Vibes contract. What are your thoughts on this?
Please select an option Oops! Something went wrong, please try again later.
Special leave is a whitewash.
40% - 126 votes
SA’s tourism sector needs undivided attention.
4% - 13 votes
Let's wait and see
9% - 29 votes
What is the point of deputy ministers?
47% - 149 votes
Previous Results
The best of 2020
Can you guess who featured in our most popular articles from 2020?