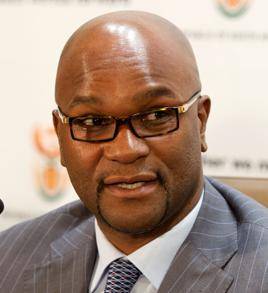 In our corner, when we say igovenment ikhona, we mean the man of the house is around.

That’s a warning! In simple terms, it means please stay far away from the house coz he’s gonna mess you up, or enter at your own risk.

Basically, we know and understand that you must respect government, full stop.

This came to mind this week after Sports Minister Nathi Mthethwa called two football bosses – Safa president Danny Jordaan and PSL chairperson Irvin Khoza – into a meeting to sort out their differences.

“I sought a commitment from them to work cohesively in unison and I’m pleased that they have committed to addressing matters together before reaching out to government and other stakeholders.

“Furthermore, they reiterated their resolve to fight the coronavirus pandemic.”

The two football organisations were at loggerheads over the suspension of league fixtures to try to curb the spread of the Covid-19 coronavirus.

This, in essence, is what government ought to have done a long time ago – bring the two organisations together.

We have always known, or, should I say, we have always regarded the department as a toothless dog that is afraid to confront football people and that is scared of other sporting codes.

Lately, Mthethwa has been known as the “minister of condolences” because he has always been quick to relay words of comfort.

Unfortunately, soon after organising a meeting between Jordaan and Khoza, he had to do what he is known for best – send condolences to the family of the recently deceased Credo Mutwa.

But that’s a topic for another day.

This thing of people undermining the authority of government is nonsense. Government must be able to lead and it must be respected.

After all, the buck stops with it. This thing of pussyfooting around won’t solve anything.

It is often said that when elephants fight, it’s the grass that suffers. In this instance, it is football that will come out as the loser.

So, big ups to Mthethwa for taking the initiative and providing leadership.

Although this is long overdue, it’s better late than never.

As the minister, he has the responsibility of showing us the way and, so far, he is going in the right direction.

I don’t remember any of the other sports ministers trying to bring the two warring factions together, let alone listening to their issues to understand where they are coming from and how the animosity started.

Leaving the tension to simmer does not bode well for the game, as per the Fifa slogan.

Mthethwa did well by taking the bull by the horns. I mean, just last week, Jordaan and Khoza were supposed to have met but failed to.

Their differences are well documented, but that is neither here nor there at the moment.

Now it is time to move forward and hopefully they will put the interests of South African football above their personal agendas.

Let’s hope they came out of the meeting reading from the same page and speaking with one voice.

This thing of people undermining the authority of government is nonsense. Government must be able to lead and it must be respected.

We need the two to work together for the betterment of our country’s football.

Now we need to know the outcome of the meeting and the way forward. We can only hope that the sports minister’s efforts were not in vain.

He has played his part and now the ball is in the court of football leaders to resolve their differences.

As for Mthethwa, he did what his predecessors failed to do, and provided leadership.

This is what we expect from our leaders – they should not be scared of individuals or tiptoe around the issues, but tackle them head-on. It’s called leadership.

And this is the kind of leader our government needs – the kind who shows their might irrespective of who you are.

After all, we should all be scared of government.

We live in a world where facts and fiction get blurred
In times of uncertainty you need journalism you can trust. For only R75 per month, you have access to a world of in-depth analyses, investigative journalism, top opinions and a range of features. Journalism strengthens democracy. Invest in the future today.
Subscribe to News24
Related Links
Mthethwa allocates R150m to ‘relief programme’ for creative sector
Nathi Mthethwa dragged into spat between languages board and workers
The costs of fixture suspension
Next on City Press
Mystery over Chiefs’ CAF opponents from Cameroon