Mosimane caused a stir last week when he recounted how he lost his Bafana job: “It was sad to be fired by a taxi owner, a priest and a traditional chief. So do I want to face that again? My fate and career in the hands of those people.”

But, in a letter written to Sundowns this week, Sibanyoni demanded Mosimane withdraw his statement publicly or face a defamation lawsuit.

“What he is basically saying is that taxi people are stupid and I have an issue with that, and I deem it as a personal attack on me, my business life and in general being in society. I am chairperson of our organisation and he is questioning my standing in my organisation. Are taxi bosses not good enough to lead other people?”

Sibanyoni, who is the chairperson of the Mpumalanga National Taxi Council, said Mosimane had no problem when he was “interviewed by the same taxi owner”.

“I was alone when I interviewed him and he didn’t raise any objection. Is he going to say he was fired by a miner if [African Rainbow Minerals founder Patrice] Motsepe fires him? 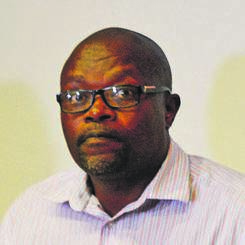 Fanyana Sibanyoni promises a lawsuit if he doesn’t get an apology. Picture: Themba Makofane

“It is my view that, at the time I discharged my duties to which he offensively refers, it was to the best of my knowledge and memory a decision I executed at the behest of Safa, both in my role as Safa technical committee chairperson and the technical committee collective guided by the constitutional instrument of the organisation to terminate his contract as coach of the national squad,” read part of Sibanyoni’s letter to the club.

“I am therefore baffled by his utterances and the perceptions he purports that my taxi business background motivated the termination of his contract as opposed to the merits upon which my appointment as chairperson of the technical committee of Safa were based.

“His presumptuous reference to a ‘taxi owner’ regrettably stretches beyond me as a person mainly as, in his view, and given his societal stature and influence, denotes that a taxi owner is incapable of logical thinking and articulate decision-making, and therefore, despite my different roles, I must always be seen through the eyes of a taxi owner,” the letter read.

However, Mosimane on Friday said he was not aware of the letter.

“I don’t want to get involved … whether the person is or not [a taxi owner]. I don’t want to discriminate or to lower him as a person or a business,” said Mosimane.

He said he actually grew up in the same taxi environment.

“My family was involved and it is a good business, a money-generating business that has taken people to school and looked after many families. Who knows? Maybe life would have been different for me if I wasn’t a coach.”

But he fired a salvo as a parting shot.

Last week, Mosimane was forced to apologise to Chief Mwelo Nonkonyana for his utterances.– Additional reporting by Daniel Mothowagae

We live in a world where facts and fiction get blurred
In times of uncertainty you need journalism you can trust. For 14 free days, you can have access to a world of in-depth analyses, investigative journalism, top opinions and a range of features. Journalism strengthens democracy. Invest in the future today. Thereafter you will be billed R75 per month. You can cancel anytime and if you cancel within 14 days you won't be billed.
Subscribe to News24
Related Links
Pitso still haunted by Bafana coaching stint after being sacked by Safa’s ‘taxi boss, priest and...
Pitso wraps Rivaldo in cotton wool
Mosimane opens up on calls for him to return to Bafana
Next on City Press
Banyana star Kgatlana confirms Safa has honoured its R400 000 bonus promise