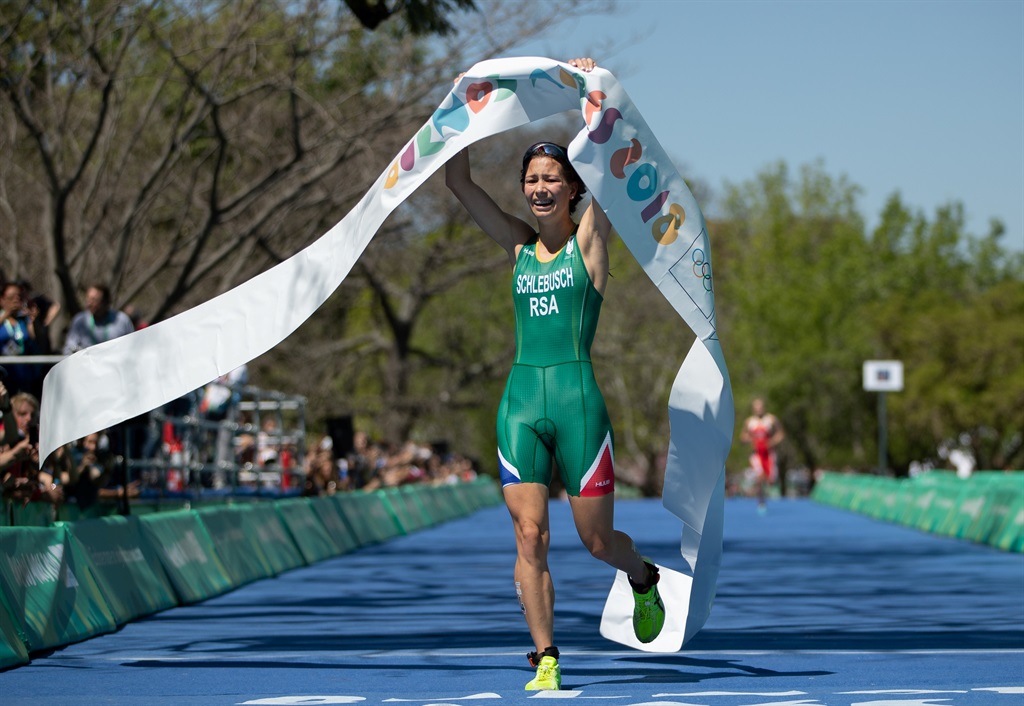 The 17-year-old won the women’s triathlon event – the country’s first gold medal in the event – in a sensational hour.

Schlebusch, who began her athletic journey as a swimmer, went into the chilly water confident but as she exited that first segment she was not even in the top five.

“I was a swimmer before the triathlon and it’s funny the swim now is my worst segment,” Schlebusch said after the event.

“I knew that my weakest part was the swim,” she said.

“And during the bike section I was in the pack at the back but nobody was really working so it was quite hard to close into the first two.”

At the end of the cycling segment, a little over 40 minutes after the 11am start time, the Durban-born athlete found herself wallowing in eighth place – almost a minute behind the leader, Sif Bendix Madsen from Denmark.

“On the run, that is where I put most of my confidence, and I just decided to catch them one by one. Take each one as it comes,” Schlebusch said at the end of the race.

With 500m to go, the South African overtook Madsen and crossed the line to claim gold 11 seconds ahead of the Danish athlete.

“I’m really, really happy to end up feeling really strong. Now I can say I’m the Youth Olympic champion. It’s a pretty good title to have so I’m really stoked. I’m in this sort of disbelief right now.”

“We had planned for a top three and Amber surprised us by putting her head down racing and getting that gold medal,” Riana Robertson, the Team SA triathlon coach said.

Christiaan Stroebel is set to compete in the men’s triathlon action event on Monday.

We live in a world where facts and fiction get blurred
In times of uncertainty you need journalism you can trust. For only R75 per month, you have access to a world of in-depth analyses, investigative journalism, top opinions and a range of features. Journalism strengthens democracy. Invest in the future today.
Subscribe to News24
Related Links
Mzansi invades Buenos Aires Youth Olympics
Next on City Press
Bvuma, Khune or Akpeyi between the goalposts? Chiefs’ spoilt for choice ahead of epic Wydad clash