The Glamour Boys beware, legendary Forlán is available to coach ‘if project is good’ in SA “Diego Forlán, would you ever consider a move to South Africa?”

The local transfer window opens in less than two weeks (September 22 to November 17). The new PSL season was initially schedule to start on October 8 but with that being an international calendar the 2020/21 campaign will now kick-off a week later – that’s about five weeks away.

In Spain, the transfer market is open and closes on October 5 with LaLiga starting today. There’s an overlap of about 14 days with regards to the respective transfer windows.

I like to travel and to be around football, it is in my DNA and my family’s DNA. But look, if I had the opportunity and there’s a nice project to go to in South Africa, you never know

However, those rules would not apply to the 41-year-old Forlán anymore as he retired almost a year ago. In his 21-year career, the Uruguay-born striker played for 10 clubs in nine countries, scored 220 goals in more than 525 appearances and, most notably, won the 2010 player of the World Cup in South Africa after leading Uruguay to the semifinals.

He is now on his managerial career, but after 11 games at boyhood club Peñarol back home, Forlán was sacked on Monday. He seemed OK with the decision though, stating that he has “no regrets, that’s football”.

“I like to travel and to be around football, it is in my DNA and my family’s DNA. But look, if I had the opportunity and there’s a nice project to go to in South Africa, you never know,” he told City Press this week. 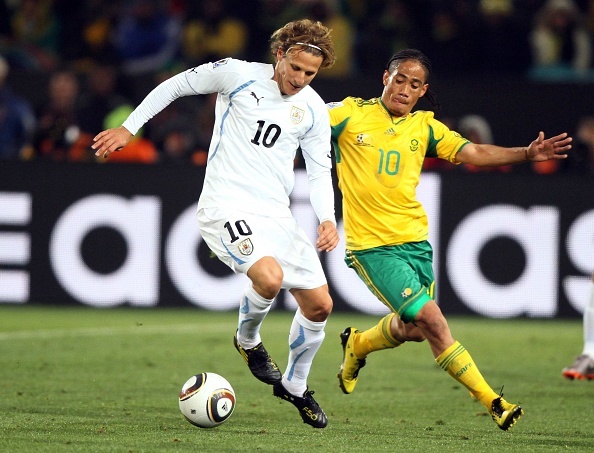 Forlán is a LaLiga ambassador as well and was part of the kick off LaLiga 90th season celebration.

“But it depends also if it’s a good family environment because before it was easy for me as it was just myself and I could go anywhere around the world. But now I have small kids.”

Forlán did say, however, that his children are still very young and schooling is not a major factor just yet. He added that “it’s always nice for them to learn about new places or another language”.

Emphasising the point, he said: “If it’s a good project you never know.”

In a week where one of South Africa’s club giants are still licking their wounds and embarking on a rebuilding phase after sacking their coach and his assistant, some people might see this as a sign.

Kaizer Chiefs sent German coach Ernst Middendorp and his assistant Shaun Bartlett packing this week and the Soweto giants seem to be in the market for a new tactician.

Read: Analysis | How the once mighty Chiefs have fallen ... and fallen

Why not a former player with pedigree, history and some coaching experience under his belt? Sure, it’s not a managerial career that’s blooming or taking off but Forlán does have international experience having played in England, Hong Kong, India and Japan. Above all, he knows how to score in South African conditions as he was the joint top goal scorer of the 2010 World Cup.

He also seems to know the places saying that he has fond memories of Kimberley in the Northern Cape, where the Uruguay team were based in 2010.

And if our superstars can go overseas why can’t international superstars come to South Africa.

“We really enjoyed [Kimberley], it was our pleasure. It was a great city and very calm and we have great memories.”

Some might think that this is out of the ball park, but in fact South African football is littered with signs of taking itself to the next level, as was seen with the dramatic and exciting ending to the PSL season.

Then there’s the fact that many South African players who made a name here moved abroad for successful spells.

Lucas Radebe, Benni McCarthy, Quinton Fortune and even the Lion of Juda, Percy Tau, are giants locally and internationally. And if our superstars can go overseas why can’t international superstars come to South Africa.

Maybe, just maybe, the flashy Motaungs will go superstar hunting – I mean that is the Glamour Boys’ philosophy is it not. Well, that and tears.

We live in a world where facts and fiction get blurred
In times of uncertainty you need journalism you can trust. For only R75 per month, you have access to a world of in-depth analyses, investigative journalism, top opinions and a range of features. Journalism strengthens democracy. Invest in the future today.
Subscribe to News24
Related Links
‘Messi not bigger than LaLiga’ says league boss Tebas as Spanish league’s 90th season kicks off
All the LaLiga 2020/21 fixtures, El Clásico scheduled for October and April
Next on City Press
Stadiums, clubs feel pinch of lockdown Read more on:
kaizer cheifsdiego forlan
Podcasts
Podcast | How to pay off your home and car