US club reveals how it captured Bafana midfielder Mokotjo 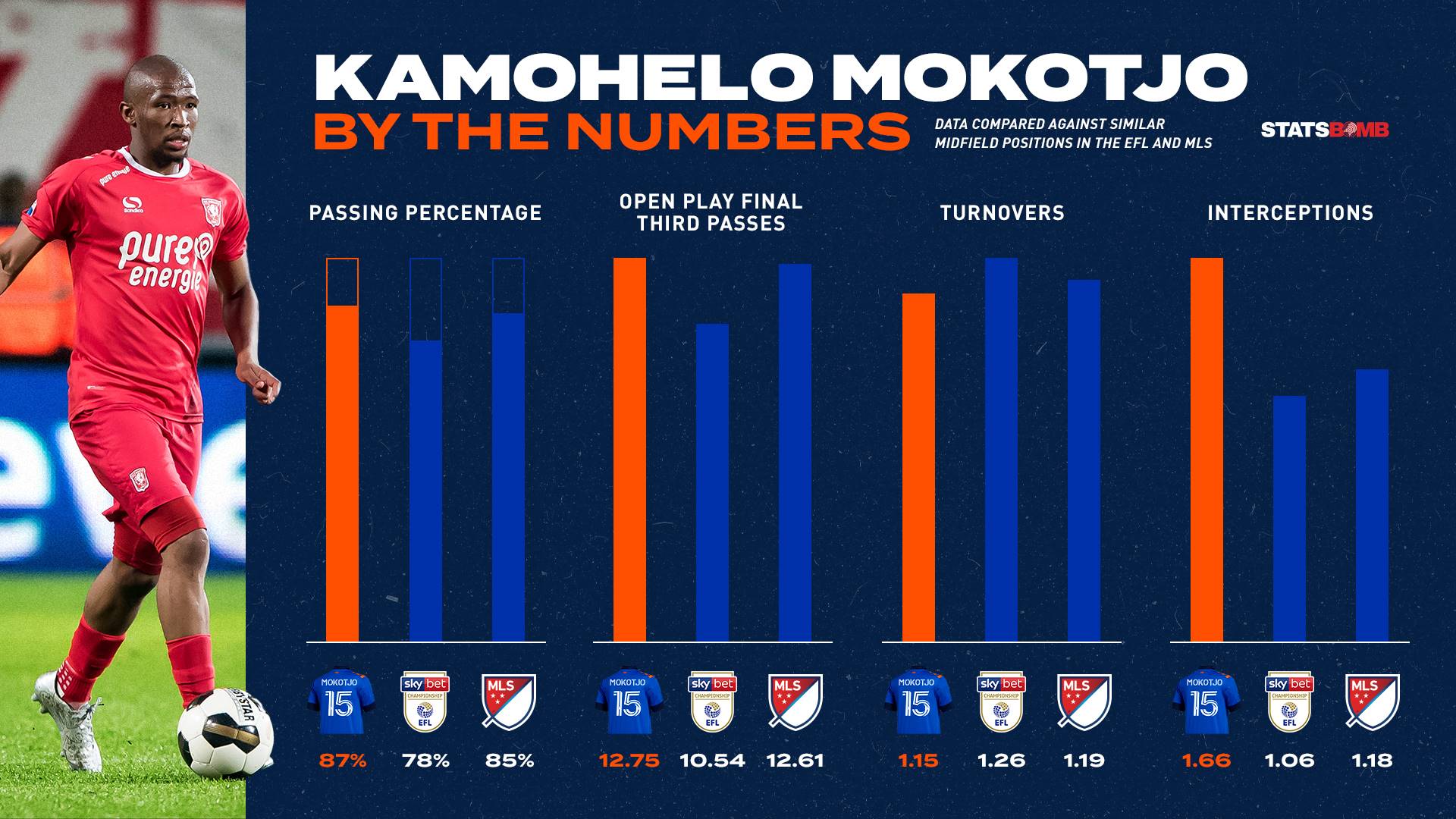 Kamohelo Mokotjo and the numbers that led to US Major League Soccer side FC Cincinnati signing him this on Thursday. Picture: graphic: FC Cincinnati

Kamohelo Mokotjo is a perfect example of how the strategy team of FC Cincinnati operates.

This is how US Major League Soccer (MLS) side explained its capture of Bafana Bafana midfielder Mokotjo, whose acquisition was confirmed by the club on Thursday.

The 29-year-old from Odendaalsrus in the Free State joined the Ohio-based club just two weeks after he left English Championship club Brentford FC, who opted to not renew his contract.

After much speculation regarding his next destination, Mokotjo has now been enlisted by Cincinnati, who are coached by Dutch and Manchester United legend Jaap Stam.

The American club said targeted players were evaluated “from multiple angles to see if the player fits the profile”, and Mokotjo ticked all the boxes.

“For each position, [FC Cincinnati] has created profiles containing key performance indicators to measure how well a target fits within the style of play and philosophy of the club.

“Some of the key factors when assessing central midfielders are positioning, mobility and ability to cover ground, all of which Mokotjo is highly rated for by our scouting team,” the club revealed.

The club’s scouting department judges players based on a fixed template, making sure all scouts evaluate the player in a similar fashion, including the analysis of data for each target.

Some of the key factors when assessing central midfielders are positioning, mobility and ability to cover ground, all of which Mokotjo is highly rated for by our scouting team
FC Cincinnati

“The performance of the player is compared not only to the current roster, but also to similar players already playing in the MLS. For Mokotjo, two metrics that stand out are his overall passing accuracy and his ability to reach a team-mate in the final third of the pitch and his ability to win possession through intercepting the ball while not turning the ball over often.

“Mokotjo’s passing accuracy is well above the league average for the Championship, suggesting that he can retain possession in a league where central midfielders usually struggle to do so.

“The same is true for passes to the final third in open play, implying that he can connect the team going forward. If we compare his interceptions and turnovers to both the Championship and MLS averages, we conclude that he wins possession far more often than he loses it, especially compared with other central midfielders.

“Having these numbers in a league such as the Championship and comparing it to the MLS average, Mokotjo’s style of play is expected to fit MLS well.”

Mokotjo said he felt that this was the right moment “for a new challenge at a club that has big potential and is willing to challenge itself”.

“I think, in a way, this is a perfect match. I’m honoured and ready to relish this opportunity and challenge,” the former SuperSport United player told the club website.

We live in a world where facts and fiction get blurred
In times of uncertainty you need journalism you can trust. For only R75 per month, you have access to a world of in-depth analyses, investigative journalism, top opinions and a range of features. Journalism strengthens democracy. Invest in the future today.
Subscribe to News24
Related Links
Does Aston Villa coach still fancy his former charge Mokotjo?
Kamohelo Mokotjo’s Premier League dream dashed as Fulham pip Bees to return to top flight in England
Arsenal heading towards another low
Next on City Press
Bongani Khumalo: ‘I’m not a footballer any more’

Sign-up to our newsletters and get the latest results and info in your inbox.
Voting Booth
President Cyril Ramaphosa has announced that SA’s vaccine passport plans are coming on. What are your thoughts?
Please select an option Oops! Something went wrong, please try again later.
We cannot be forced
31% - 86 votes
It’s critical
23% - 64 votes
Vaccines save lives
46% - 129 votes
Previous Results
The best of 2020
Can you guess who featured in our most popular articles from 2020?