What a legacy: ‘Franzo’ reflects on 40 years in women’s football 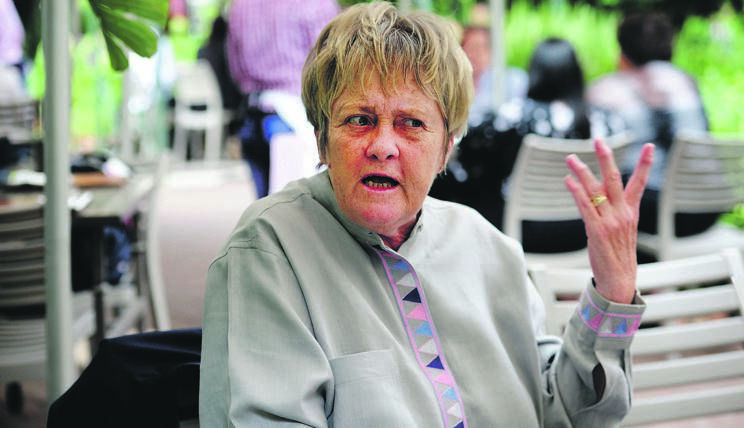 Fran Hilton-Smith is in the process of writing a book about her life and experiences with the beautiful game. Picture: Cebile Ntuli

Fran Hilton-Smith went through so many trials and tribulations in football over the years that, had she served in the army, she would have earned war veteran status. Her buckling knees and arthritis-ravaged fingers may be signs of old age, but these define her as a battle-hardened master of football.

In the beginning, Hilton-Smith (66) was an aspiring footballer who was so bright, her skills with the ball left a lasting impression on Kaizer Chiefs founder Kaizer Motaung years ago.

It has been almost two months since the Germiston-born Hilton-Smith retired, but her passion for women’s football refuses to die. It was befitting that “Franzo”, as she is affectionately known if soccer circles, was awarded the Steve Tshwete Lifetime Achievement Award at the SA Sport Awards in November.

Hilton-Smith has been credited for her role in empowering women through football. Her vision was always to develop women coaches. She also assisted in the moulding of administrators in the women’s game.

As we sat down for our interview in Parktown, Johannesburg, this week, Hilton-Smith was sometimes almost overcome with emotion as she recollected some of the key phases in her life that define her as one of the country’s pioneers of women’s football.

Her good articulation of some common kasi phrases such as “what-what” and “sho” during our conversation also gives an indication of how much Franzo has learnt from the players, especially those from the townships.

Hilton-Smith started out as a player in the late 1960s. She played as a left-winger for Eastern Transvaal in a career spanning a decade.

“I was a good player in my time,” she said. “I could score directly from the corner kick. We used to play curtain-raisers for the Soweto derby.

“One day, Kaizer Motaung saw me in action and he said afterwards: ‘If you were a boy, I would sign you now for Chiefs!’” reminisced Franzo, who is also an avid musician. She played the guitar and drums for an all-woman jazz group called Basadi.

Hilton-Smith also recalled being at the forefront of the formation of multiracial women’s football structures in the 1970s. She said that, despite racial oppression during the dark days of apartheid, women’s football was quitely running in the background.

Franzo also credited former Chiefs defender Joseph “Skheshekheshe” Mkhonza for being part of the revolution by bringing his club from the township to play against their white counterparts in the then Eastern Transvaal suburbs.

“We started with the leagues and then there were interprovincials [tournaments]. We had Natal, which was the strongest, as well as the Western Cape. The police at the time were chasing the men and the women were left alone. “So Skheshe and I started multiracial women’s football in Eastern Transvaal in the 1980s. That’s how our friendship started, and we later attended coaching courses together.

“He did a lot to develop women’s football and he is still doing that, particularly at grassroots level. He is one of many who are doing a lot for the women’s game, but they don’t get recognition,” said Hilton-Smith, who recommended Mkhonza for the Banyana coaching job in 2010.

Hilton-Smith also paid homage to Mary-Jane Sokhela, who was her vice-president in the now defunct SA Women’s Football Association, a body that came about three years after the Safa was formed in 1991.

Sokhela is the founder and chairperson of Durban Ladies FC.

Transitioning from player to coach

When her playing days ended, Hilton-Smith ventured into coaching. It was not easy to break into a system mostly aligned to the men’s game.

“I realised that there were not many woman coaches around, that’s why I decided to go into coaching. When I started coaching, it was all the big boys there and here came this little white Fran woman who wanted to be a coach. I fought hard to get where I am. I got there against all odds.

“There was a high-level CAF coaching course here in 1995 and I was initially not wanted. All the big boys were there – Shakes Mashaba, Trott Moloto [both former Bafana Bafana coaches] and [Chiefs legend] Computer Lamola ... but I pushed until I was accepted. And so started my coaching career, and I earned all my coaching badges.

“If women are given a chance, they can do anything, but we’ve got to push and fight.”

Hilton-Smith became the first woman to coach Banyana during the team’s formative years in the early 1990s, doubling up as the national Under-19 head coach. Safa later elevated her to the manager of all women’s teams.

She rose through ranks as a CAF and Fifa instructor.

“I am the only woman on the CAF technical development committee and the only South African to serve there. I am the most qualified on the continent and Africa’s only woman Fifa instructor since 2001,” she said proudly.

Hilton-Smith has been credited for her role in empowering women through football. Her vision was always to develop women coaches. She also assisted in the moulding of administrators in the women’s game.

“I took all the former Banyana players who were interested and put them through the CAF coaching courses. We now have 21 CAF A-licence women coaches in South Africa, which is more than the whole of Africa put together,” bragged Franzo.

“All our national teams’ coaches – Desiree Ellis [Banyana], Simphiwe Dludlu [Under-17], Jabulile Baloyi and Maud Khumalo [both Under-20] ... came through this vision of mine to have women coaches in national teams.”

In addition to the coaches, there are qualified women technical officers across the country, an initiative introduced by Safa technical director Neil Tovey.

“I applied to Fifa for funding and ran three Fifa administration courses for the women who were working in the regions. Now we have 87 women from the Safa regions who have completed the course,” said Hilton-Smith.

The year 2000 was when things changed in the women’s game in the country, said Franzo.

“For all the wrong reasons, the abandoned final between Banyana and Nigeria attracted the attention of the continent and the world.

“There had never been a riot at a women’s football game,” recalled Hilton-Smith of the Afcon final at Vosloorus Stadium in Ekurhuleni. Nigeria won 2-0.

“As much as the game attracted negative publicity, it also helped us to get recognition. Fifa contacted me afterwards [and invited me] to be part of its technical study groups at various Women’s World Cups across all the age groups.”

Another defining moment for the domestic women’s game was Sasol’s involvement, which began in 2009, on the eve of the 2010 Soccer World Cup.

“Credit must go to Nolitha Fakude, who made a bold decision to sponsor Banyana,” she said. At the time the high-flying businesswoman was an executive director at Sasol.

“They pumped in the money and there was also the formation of the Sasol League. That’s why Banyana qualified for two Olympic Games [in 2012 and 2016] and we could compete [at the highest level. Of course, Safa also played their part in the development of women’s football.”

Hilton-Smith said the decision to employ a foreign coach for Banyana for the first time in 2014 also served as a catalyst in the turnaround.

Former Netherlands captain Vera Pauw took over the reins and she was credited with giving the team a solid playing structure, even though Banyana failed to qualify for the World Cup in 2015.

“Des [Ellis], as assistant [coach] at the time, learnt a lot from Vera because she helped Banyana qualify for their maiden World Cup last year,” said Hilton-Smith.

Realisation of a dream

Banyana’s qualification for the World Cup after trying for 21 years remains a standout out for Hilton-Smith.

But she couldn’t openly show her emotions because she was on a Fifa assignment as part of the technical study group at the 2018 Afcon finals in Ghana when South Africa booked their place in the global spectacle, which was held in France.

“I have been to all the Women’s World Cups and I would sit there and ask myself: ‘Where is South Africa because we can play here and our players can be scouted?’

“So when we qualified, I was bursting [with joy] inside because it was the ultimate dream come true,” she said.

Looking back at her life’s work, Hilton-Smith said: “I can safely sayI have achieved [a lot] with regardsto the development of coaches and administrators, and, of course, the High Performance Centre [HPC] in Pretoria that I started 15 years ago.

“I feel I’ve left a legacy for women who can easily take over from me. I can sleep in peace.

“Having travelled the world and learnt so much, I saw a need for us to also start a women’s football academy with everything under one roof – from medical and scientific assistance to education. So I went to the [National] Lottery [for funding] so that we could bring in the best players who were also studying.

“That paid off because nearly all these players who are now professionals – Linda Motlhalo, Thembi Kgatlana, Janine van Wyk and Regina Mogolola – come from the HPC. At one point, 16 Banyana players were from the HPC and 13 of them had qualified with university degrees.

“One of the products of the HPC, Simphiwe Dludlu, has a sports science degree and holds a Uefa B-licence. She is the only African woman with this coaching badge.”

Witnessing the launch of a national women’s league last year was another highlight, but Franzo feels the big issue is the lack of sponsorship.

“Hopefully, I can help us attract sponsors when I take to the podium as one of the speakers at the World Football Summit in Durban next month.”

During her tenure as Banyana coach, Hilton-Smith was contacted by a friend in England to recommend a few top national team players to the Arsenal women’s team.

What started as a dream move for the players turned into a nightmare.

“We didn’t get the arrangement quite clear that the players would only get paid when they played, but it was difficult to break into the first team at Arsenal. The money issue caused unhappiness,” admitted Hilton-Smith.

“The culture shock was another story as England is another world. I lived there before and there’s no township vibe like a shisanyama or anything like that.

“But it was a big experience because it led to Portia being signed in Sweden. Things have changed for the better [since then] as our players are now with big clubs,” Franzo said.

Fran Hilton-Smith went through so many trials and tribulations in football over the years that, had she served in the army, she would have earned war veteran status. Her buckling knees and arthritis-ravaged fingers may be signs of old age, but these define her as a battle-hardened master of football.

“I feel I’ve left a legacy for women who can take over from me easily. I can sleep in peace.”

We live in a world where facts and fiction get blurred
In times of uncertainty you need journalism you can trust. For 14 free days, you can have access to a world of in-depth analyses, investigative journalism, top opinions and a range of features. Journalism strengthens democracy. Invest in the future today. Thereafter you will be billed R75 per month. You can cancel anytime and if you cancel within 14 days you won't be billed.
Subscribe to News24
Related Links
Get 23% off these football togs
Hanging Judge: These referees were off-mark
Editorial: Hope vs reality ... And now to a new decade
Next on City Press
Pitso’s first week in Saudi Arabia serves him with moments to savour