What’s in City Press Sport: So long, Bidvest Wits; It ends in tears for Chiefs; Sundowns-Celtic battle is about far more than the R7m prize 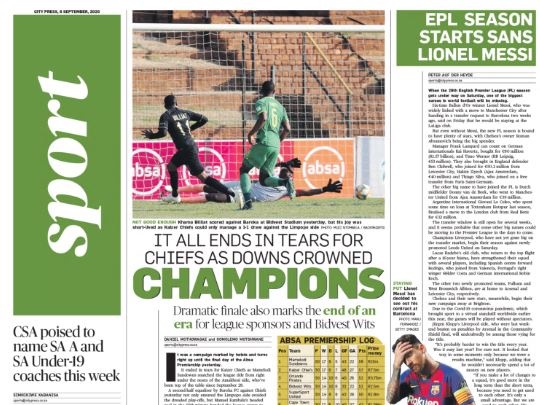 How ironic it is that, as one old South African football club ceases to exist, another iconic outfit makes a return to top-flight football.

On Saturday, the country bid a sad farewell to the 99-year-old Bidvest Wits, who have given way to Tshakhuma Tsha Madzivhandila, but the story of the week for me has to be the resurrection of Swallows, writes Timothy Molobi.

Side Entry: Playing in the north or the south, Boks are in no-man’s land

One would imagine the playing future of the reigning world champions would long have been secured, regardless of the fact that this Covid-19 ravaged year is nothing if not defined by its many moving parts, but here we are with no confirmation either way for competitions pencilled to begin on November 7 (Rugby Championship) and a week later (the Eight Nations), writes Simnikiwe Xabanisa. It ends in tears for Chiefs as Sundowns are crowned Champions

It was a campaign marked by twists and turns right up until the final day of the Absa Premiership yesterday. It ended in tears for Kaizer Chiefs as Mamelodi Sundowns snatched the league title from right under the noses of the Amakhosi side, who’ve been at the top of the table since September 28. How Chiefs blew the 13-point gap they held at one point will surely be the topic of discussions for years to come.

Discarded Vries cherishes his opportunity to fly with Swallows

Virgil Vries grew up dreaming of becoming a champion while playing for a certain club from Soweto. Little did he know that his dream would one day come true – not with Kaizer Chiefs from Phefeni, as was his childhood hope – but with Swallows. He achieved this feat this with other “rejects” who formed the team’s spine.

Swallows FC head coach Brandon “Brakkies” Truter’s grey sweatshirt is always hanging around his shoulders, a look he adopted by default, rather than by design. It became a common feature during his team’s match days and is still evident. This fashion trend from the 1980s, which was mostly associated with wealth, is something Truter’s technical staff and players believe worked like a lucky charm during the Soweto club’s return to the top ranks of domestic club football.

The revival of Swallows

A lunch date at Birchwood Hotel in Boksburg on May 26 last year marked a vital step in the resurrection of Swallows FC… we have the full timeline.

When the 29th English Premier League season gets under way on Saturday, one of the biggest names in world football will be missing – six-time Ballon d’Or winner Lionel Messi, who was widely linked with a move to Manchester City after handing in a transfer request to Barcelona two weeks ago.

Cricket SA should break with its newfound tradition of not being able to get anything done at an operational level this week when it announces the coaches to fill the vacancies in the South African A and Under-19 teams. The head coach positions for those sides have been vacant since former Proteas coach Russell Domingo left the South African A team for Bangladesh last year and Lawrence Mahatlane accepted the post to coach Uganda in June.

Puma is offering lucky City Press readers a chance to win some amazing prizes. Up for grabs are new Mamelodi Sundowns home jerseys and pairs of the latest Puma Ultra 1.1 football boot.

We live in a world where facts and fiction get blurred
In times of uncertainty you need journalism you can trust. For 14 free days, you can have access to a world of in-depth analyses, investigative journalism, top opinions and a range of features. Journalism strengthens democracy. Invest in the future today. Thereafter you will be billed R75 per month. You can cancel anytime and if you cancel within 14 days you won't be billed.
Subscribe to News24
Related Links
Chiefs denied victory as Wits grab late equaliser
Bidvest will bleed cash before TTM can rise
Next on City Press
Zwane hits back at Baxter: ‘He mustn’t come here and disrespect us and expect us to keep quiet’