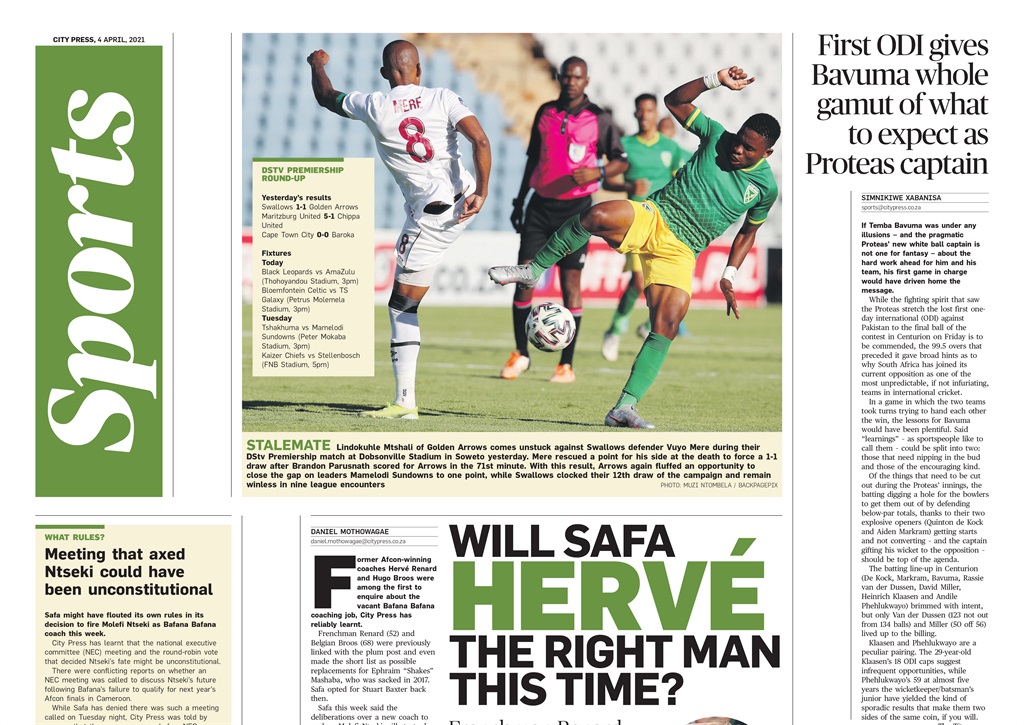 Tim Spirit: Where is Safa boss when leadership is needed?

French writer Jean-Baptiste Alphonse Karr said: “The more things change, the more they remain the same.” This is so true, with our national football association, Safa, once again hogging the news headlines for all the wrong reasons.

Where does one really start on the latest crisis around Bafana Bafana? A lot has been said already, but one uncertainty is about the future of our national team. And an even more pertinent question is: Where is the Safa president when his leadership is being sought, asks Timothy Molobi.

The 12th Man: Why a caretaker coach could be a solution – for now

With next year’s World Cup qualifiers starting in June, a caretaker coach might be a good option for Bafana Bafana, instead of a full-time appointment at this time.

Already, there are fears of what would happen to Molefi Ntseki’s successor if the national team failed to qualify for the Qatar World Cup. The fact that Safa will hold its elective conference after next year’s global championships could add another conundrum to the already complex equation, writes Daniel Mothowagae.

My Take: The state of Bafana reveals a much deeper crisis for the game in SA

For a lot of people, Bafana Bafana’s failure to qualify for Afcon in Cameroon represented a catastrophic event. The truth, however, is that this is simply a symptom of a deep-seated problem that is farther reaching than just one national team’s failure to qualify for a major tournament. The failure of Bafana is a failure not just of Safa, but of the PSL as well, writes Sgwili Gumede.

Opinion: Safa’s NEC is not fit for purpose

The sacking of Bafana Bafana coach Molefi Ntseki by Safa is just like papering over huge cracks. There’s a whole missing wall in the association’s structure. Safa has not addressed the fundamental issues that have been pointed out by some of the previous Bafana coaches, among them Carlos Queiroz, Carlos Alberto Parreira and Stuart Baxter, writes Buti Lerefolo.

Side Entry: We need to talk about playing spin

The good news is that, after last weekend, Cricket SA (CSA) has found the site for its future spin camps for its batsmen. The bad news is that the Titans loss of 19 of their 20 wickets in the final of the four-day series to spin suggests South African batsmen are no closer to solving this riddle. The big upside to all of this is that if CSA feels it would like to hold spin camps internally to reach more numbers, it now knows to conduct them in Durban and Potchefstroom, writes Simnikiwe Xabanisa.

Will Safa Hervé the right man this time?

Former Afcon-winning coaches Hervé Renard and Hugo Broos were among the first to enquire about the vacant Bafana Bafana coaching job, City Press has reliably learnt.

Frenchman Renard (52) and Belgian Broos (68) were previously linked with the plum post and even made the short list as possible replacements for Ephraim “Shakes” Mashaba, who was sacked in 2017.

Safa opted for Stuart Baxter back then. Safa this week said the deliberations over a new coach to replace Molefi Ntseki will start when the association’s technical committee reconvenes after the Easter holidays. While Renard and Broos are back in the picture, local favourite Benni McCarthy has hinted he is not ready for the top job.

Meeting that axed Ntseki could have been unconstitutional

Safa might have flouted its own rules in its decision to fire Molefi Ntseki as Bafana Bafana coach this week. City Press has learnt that the national executive committee (NEC) meeting and the round-robin vote that decided Ntseki’s fate might be unconstitutional. While Safa has denied there was such a meeting called on Tuesday night, City Press was told by sources that there was a caucus before NEC members were asked to vote “yes” or “no” on whether Ntseki should be fired or not.

Orlando Pirates striker Tshegofatso Mabasa wears his faith on his sleeve – literally. Before every match, without fail, Mabasa’s routine is to put on his kit, say a little prayer and write the Bible scripture Philippians 4:13 on his wristband. The routine won’t be different when Bucs face Ahli Benghazi in the in CAF Confederation Cup group fixture in Libya this evening.

It’s a weird coincidence but, on the three recent occasions Bafana Bafana have failed to qualify for Afcon, South Africa-born specialist coach Riedoh Berdien has helped another country to reach the continental championships.

The 38-year-old from Cape Town has been credited with helping Gambia reach their maiden Afcon finals, after the Scorpions finished top of their group to confirm their place at the showpiece, which will be staged in Cameroon next year.

If Temba Bavuma was under any illusions – and the pragmatic Proteas’ new white ball captain is not one for fantasy – about the hard work ahead for him and his team, his first game in charge would have driven home the message.

While the fighting spirit that saw the Proteas stretch the lost first one-day international (ODI) against Pakistan to the final ball of the contest in Centurion on Friday is to be commended, the 99.5 overs that preceded it gave broad hints as to why South Africa has joined its current opposition as one of the most unpredictable, if not infuriating, teams in international cricket. In a game in which the two teams took turns trying to hand each other the win, the lessons for Bavuma would have been plentiful.

Oupa Mohoje’s flagging career could be handed a sensational lifeline if the whispers coming out of Loftus Versfeld Stadium are true.

City Press understands that the former Cheetahs captain has signed for the Bulls and, after being spotted at Loftus this week, is supposed to begin his stint as a Bulls player as early as Tuesday.

The move represents a massive act for Mohoje, whose playing stocks have tumbled in recent seasons.

The last time South African rugby fans saw Willie le Roux was on Chasing the Sun – the documentary on the Springboks winning the 2019 World Cup – explaining how playing with nerve damage to his left shoulder affected his form to the point where he asked to not play in the final. Having taken his gold medal and undertaken a second stint in the Japan Top League with Toyota Verblitz, many might be forgiven for thinking they’d seen the last of the 31-year-old veteran nicknamed Majayivane (the Dancer) by an isiXhosa commentary team all those years ago.

Khotso Mokoena jumps for a spot on the Sascoc board

Accomplished long jumper Khotso Mokoena has taken a long stride by hanging up his spikes to embark on a new chapter in sports administration. The 2008 Olympic silver medallist was this week elected the chairperson of the SA Sports Confederation and Olympic Committee (Sascoc) athletes commission, which includes former Banyana Banyana captain Amanda Dlamini and a band of Olympic medallists.

We live in a world where facts and fiction get blurred
In times of uncertainty you need journalism you can trust. For only R75 per month, you have access to a world of in-depth analyses, investigative journalism, top opinions and a range of features. Journalism strengthens democracy. Invest in the future today.
Subscribe to News24
Next on City Press
Surprise! It’s number one vs number two in DStv Premiership clash

Choose a newsletter
Voting Booth
Please select an option Oops! Something went wrong, please try again later.
Police need training against their brutality
25% - 37 votes
A need for more action against police
17% - 26 votes
Police protect themselves
21% - 32 votes
Nothing will change
37% - 55 votes
Previous Results
The best of 2020
Can you guess who featured in our most popular articles from 2020?