What’s in City Press: Dirty money behind Moti kidnapping | The many lives of Danny Msiza | Somizi back, Unathi out? 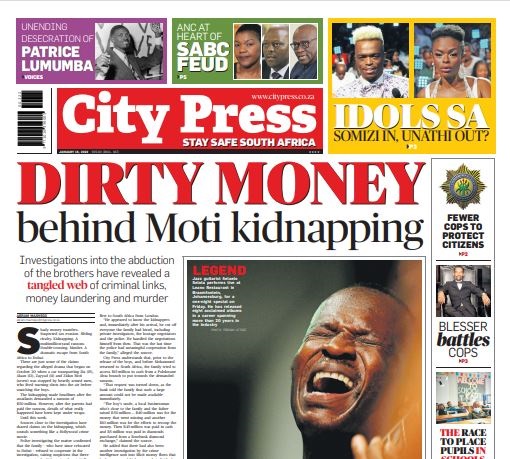 The many lives of Danny Msiza

He’s back to climb even higher. Just when his opponents were about to write his political obituary, ANC Limpopo treasurer Danny Msiza has bounced back and taken centre stage in the party’s provincial plans.

Somizi back, Unathi out?

Media personality Unathi Nkayi is unlikely to be part of the upcoming season of popular singing competition Idols SA.

According to sources close to the production, Nkayi’s break from the show will coincide with the dramatic return of controversial judge and fan favourite Somizi Mhlongo.

The race for each of the ANC’s top six positions is affecting succession in the party’s provincial structures, which are also going through their own leadership transitions.

Leaders who currently sit on the provincial executive committees (PECs) are positioning themselves to take over as chairpersons and various provinces are pushing to place their own leaders in the party’s most senior ranks.

‘Mr Fix’ has not repaired much at all – Outa boss

While Transport Minister Fikile Mbalula continues to make empty promises, the Administrative Adjudication of Road Traffic Offences (Aarto) Act has been declared unconstitutional, new drivers’ licence cards cannot be printed, the country’s train service is in shambles, the railway infrastructure has been looted and road deaths are increasing, his critics say.

Royal leaders in Limpopo have thrown their weight behind ANC president Cyril Ramaphosa for a second term as head of the party, as they place their faith in his abilities to foster unity within the organisation.

Officials in the KwaZulu-Natal legislature are in disarray as they prepare for the official opening of the provincial government.

The source of their confusion is the ongoing wrangle over the succession to the Zulu throne.

The Johannesburg Labour Court has ruled that the Limpopo education department head had no legal right to terminate teachers’ rural allowance. Judge André van Niekerk ruled on Friday that the termination of the incentive was invalid.

What about Aarto money?

The metro police of both Johannesburg and Tshwane are considering claiming back billions of rands in traffic fines which they had to relinquish to the Road Traffic Infringement Agency (RTIA) over the past decade or so.

The race to place pupils in schools

Provincial education departments are racing against time to ensure that they place pupils in schools before the end of the first term.

Inland schools opened this week and those on the coast will follow suit on Wednesday.

Parents of a former pupil at a private Christian school in Sandton are dragging the school to the Equality Court in Johannesburg after their minor child was banned from wearing a traditional Zulu armband more than two years ago.

Two months after a new mayor was voted in to run the city of Johannesburg, it has not been an easy ride for the DA-led multi-party government.

The ANC was left with egg on its face after the Patriotic Alliance (PA), which had worked with it in several municipalities, decided to work with the DA in the Johannesburg Metro Council.

Yamikani Janet Banda, popularly known as Lady Zamar, underwent surgery in November, after developing problems in her throat, which affected her voice.

The National Education, Health and Allied Workers’ Union has accused Unisa’s vice-chancellor, Professor Puleng LenkaBula, of “lawlessness” and of failing to follow the processes of the university.

These allegations are contained in a communiqué, which City Press has seen, that the union wrote to its members on Tuesday.

Former health minister Zweli Mkhize is riding high since he left Cabinet, and the planned ANC conference in KwaZulu-Natal’s Musa Dladla region in Empangeni marks a crucial test in his lobby group’s plans to establish him as a formidable force ahead of the governing party’s elective conference in December.

The papa, the prince and the palace: royals behaving badly

A dispute over the occupancy of the Bumbane Great Place near Mthatha in the Eastern Cape has resulted in the peace agreement between abaThembu King Buyelekhaya Dalindyebo and his son Prince Azenathi coming to an abrupt end.

SABC feud opens a can of worms

The ongoing battle between the SABC hierarchy and its news editor in chief, Phathiswa Magopeni, has caused a storm in the public broadcaster, and there are indications of deep-seated political interference.

Viwe Rula is one of more than 30 healthcare workers who left their homes in the Eastern Cape this week to camp outside the national department of health’s offices in Pretoria in an effort to be employed.

Self-proclaimed “international blesser” Serge Cabonge is at loggerheads with the law after he was arrested on Monday for alleged reckless and negligent driving.

A parliamentary committee has come to the defence of an academic who was fired from her job at the University of Venda and later lodged a sexual harassment case against a vice-chancellor about a decade ago.

Big year ahead for ANC and alliance

In a rare occurrence, the ANC and its alliance partners, trade union federation Cosatu, the SA Communist Party (SACP) and their youth structures, will hold elective conferences in the same year.

SAPS: Too many sheriffs and not enough cops

South Africa has fewer police officers than ever before on the streets to fight crime, while salaries for the police’s office-bound top management teams now amount to about R1 billion.