Amanda Black on taking back her power After having a sad day, Amanda Black picked up her guitar and says the music started coming to her. Pictures: Supplied

Following the release of her second album, Power, singer-songwriter Amanda Black speaks to Helen Herimbi about prophecy, popularity and power.

Beneath the fringe of her signature blue Bedoo beaded wig, Amanda Black smiles with her whole face. It’s a mischievous smile that creases up the dots lining the bridge of her nose. Umchokozo, the Xhosa facial art, has adorned her face in public for years.

It’s August and we’re in a small room at Moses Mabhida Stadium in Durban during the annual Music Imbizo. She and Pietermaritzburg-raised, now Los Angeles-based singer-songwriter Candice Pillay are giving a masterclass on songwriting. For the first time in months, Black looks genuinely happy.

“I used to freestyle on the spot when I performed,” she tells the audience and then reveals her pearly whites.

“People would later meet me and say they wanted to hear the songs, but I’d be like: ‘What song?’ I made lyrics up and later took them to the studio to record the songs.”

Some of those songs would become her critically acclaimed, multi-award-winning debut album Amazulu. The album was certified platinum, with more than 30 000 units sold, three weeks after its 2016 release.

However, the road to her second album, Power, stole Black’s smile. It was her ability to freestyle that slowly brought it back.

Power of the Pen

Three months after that Durban masterclass, we’re being roasted by the Jozi summer sun at a restaurant and Black orders a tall glass of crushed ice for her orange juice. The weather is a reflection of her recently released album.

After signing to Ambitiouz Entertainment and releasing Amazulu, Black was the belle of the beats. She was topping charts, gigging across the country and even scooped four SA Music Awards in one night, but it wasn’t long before the record skipped on the relationship between artist and indie label.

“I fought to get to an understanding with the label,” she says as she sticks a straw through the ice, “but I had to see a lawyer because it got to a point where [Ambitiouz] was sabotaging gigs. They didn’t want to promote the Amazulu album anymore. I only had two singles. Even the second video was one I had to fight for.

“People were calling me to say they tried to book me, but they were told I was too busy. I was convinced that by the time I came out of the label, I’d have no career. Around October 2017 they stopped paying me for gigs, so I put in notice to leave the management contract. I was still going to gigs and paying the band myself. I took them to court in 2018 and it was a long back-and-forth, but I won the case and am officially no longer tied to them.”

Free from the record company, she started her own imprint, Afro Rockstar, and partnered with Sony Music to release her music. Still, before she could put out Thandwa Ndim, an anthem that affirms one’s right to look inward for love, she first had to find the words to sing.

“When I was making Power I had to face myself, and it was scary,” Black shares.

“For a while, I couldn’t write. Creatively, I was blocked because I wasn’t facing my problems and what was happening to me at the time. I didn’t deal with that, I just went into survival mode.”

The songbird was perched on her couch when songs for Power took shape.

“At that point I was so removed from my art that my spirit was low, but sometimes the songs would come while I was just sitting on my couch,” she says before she breaks into melody. “Then, I would force myself to pick up my guitar.”

Power opens with a poem by Kush Mahleka and some spoken word from Black, who confesses that she blamed music for breaking her heart. There is Ndizele Wena, a ballad that she created on the spot during a jam session. The piano-driven Ndilinde finds Black belting out the title – which means wait for me – with such intensity it feels like a plea to the unseen.

“Ndilinde is the only song on this album that I didn’t rearrange or fix after I freestyled it,” she says. “I remember that night. I was alone in the studio and recorded it myself. The song is about me feeling like I have drifted away from myself and the song was me asking myself to wait, for me.

“The second half of the song was inspired by my friend who lost her mom. I was going through my challenges, and I wasn’t there for her like I should’ve been. So at the end of the song I apologise to her for that.”

Phambili is the pièce de résistance of Power. It’s a reminder to self and sundry to move forward. The gospel-tinged Vuka features American singer Anthony Hamilton and the Soweto Gospel Choir. It encourages one to rise from under obstacles, and on it Hamilton sings in isiXhosa. Black laughs at the thought then admits: “I wrote the first and second verses, and I thought he was going to come up with his verse, but he actually sang my verse – with the isiXhosa words – and I didn’t even have to tell him how to pronounce anything.”

The songstress uses her own experiences of trial and triumph to write a universal story that’s woven through Power. 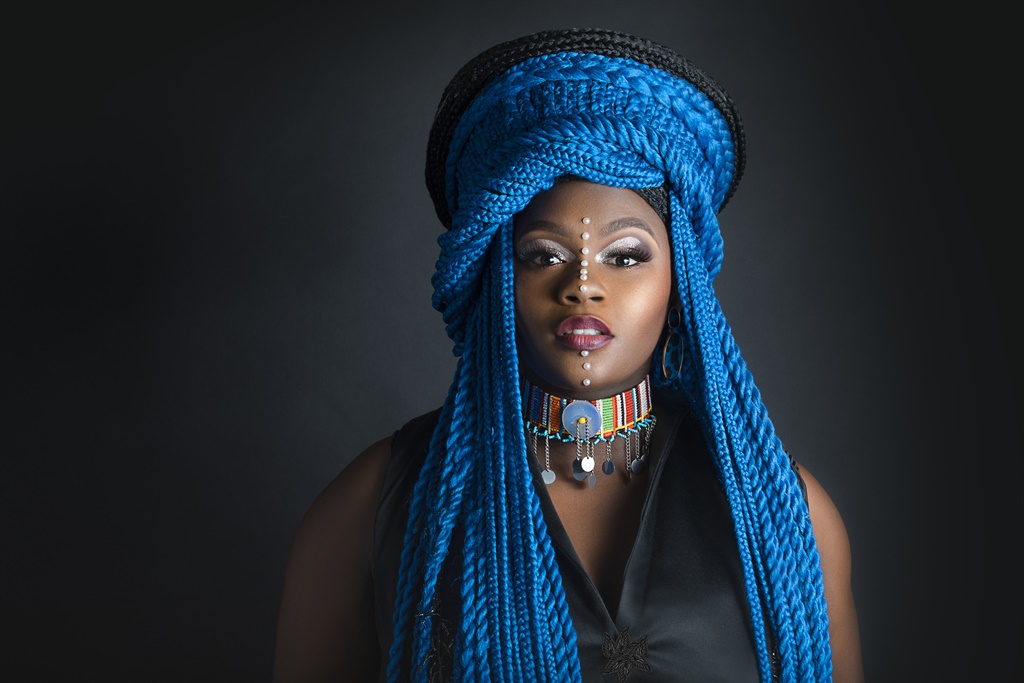 Black rose to prominence when she appeared on Idols SA. Season 11 was her third attempt at winning, and she made it as far as the top seven and by then she had caught the eye of fans and executives alike.

“After Idols was over,” she says, “I was lying on the couch at home and I was having a low day. I picked my guitar and these words just came to me.”

She tilts her head to the side and closes her eyes as she sings: “Last night I had a dream, and in that dream you called me beautiful...”

That became the first half of Famous, the sublime sixth track on Power. After she sings me the line, her eyes open, only slightly, because the smile drawing across her cheeks pushes her lids together.

She explains: “I’ve always been in these conversations about going commercial and compromising your art. I imagined fame as being something that requires you to give something away.

“So on that couch I knew when I was alone with my music that it was untainted. I didn’t want to give up that love and passion so that I could be famous. After releasing my first album, I lost the connection to music, despite my saying that I was not going to give it up. So this song was relevant to me. I had to finish the song. I wrote the second verse of Famous this year and took that power back.”

Community is a central theme in her choice of collaborators, such as longtime producer Christer Kobedi, and the relatable narratives entrenched in the music. That communal aspect is one of the most endearing things about it.

“I’m not just talking about myself,” she says. “Music is a mirror. With Thandwa Ndim, I imagined a woman surrounded by a legion of women from all shades, shapes and backgrounds. With Baninzi, I felt not so alone because I felt many artists went through worse things than me and had their livelihoods taken away from them. If we all rally around each other, we can form a barricade.”

She has rallied around new artists such as Ami Faku. They sing a duet on Khumbula, a dance number that beckons a missed lover to return.

Black excitedly shares: “The instrumentation of Khumbula is different. It’s Afro and dance and a little amapiano-ish.

“I wanted to work with Ami Faku, but the album was already in mixing. Management made it happen. Ami wrote the chorus and we listened to beats in the studio.

“After about five beats, we heard this guitar loop and the rest of the song was written on this chilled vibe. But then we changed the sound to be more dance,” she says as she lifts her fists to try the pouncing cat dance.

“This is an attempt at a pouncing cat,” she says then chuckles, “I can only do it when I am sitting down.”

She’s especially proud that Power is stretching her artistically and otherwise.

“Amazulu was done within a month!” she exclaims. “People even thought Sjava wrote Amazulu. So we took our time with this album because I wanted to prove to myself that I could still do it without that label. I wanted to prove that I wrote my own songs.”

“Some of my songs are very prophetic,” says Black after another glass of crushed ice is placed before her. “Even with Amazulu, I was going through the most when I made that song. I had experienced life, like, in my teens,” she chuckles, “but I was singing about a time I hadn’t reached yet. I was singing about fighting for survival only to go on a year later and have to fight for survival. When I said I’ve got power, I was lying on the couch feeling powerless.”

Beyond the music, this powerlessness is something Black has discussed on platforms, such as her Power Diaries series, a YouTube visual diary where she lets viewers in on her feelings. In the second episode she only speaks of “really low days”, but on Phambili she sings that “depression’s got me feeling like a stranger”.

“I won’t know until I go to see a professional,” she says and shrugs with a smile.

It’s a process, one that Black will be freestyling as she goes along. She continues: “The reason I didn’t want to say it’s depression is that I think sometimes we label ourselves, but we can’t diagnose ourselves. I still get very sad days, but I have to remind myself to fight for my life every day.

“This album was about me letting go. I’m in such a better place now.”

We live in a world where facts and fiction get blurred
In times of uncertainty you need journalism you can trust. For only R75 per month, you have access to a world of in-depth analyses, investigative journalism, top opinions and a range of features. Journalism strengthens democracy. Invest in the future today.
Subscribe to News24
Next on City Press
Just the way kungakhona: Matijane not returning to Moja Love show